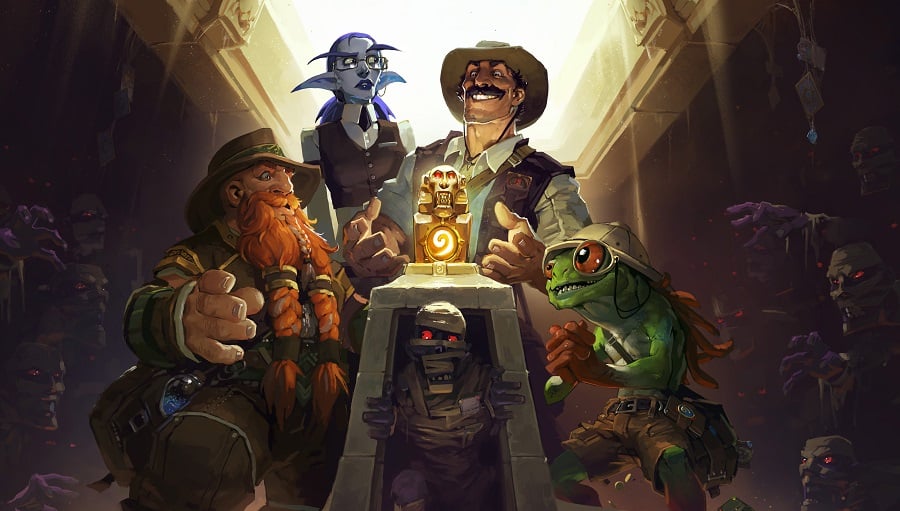 Welcome to The League of Explorers! This past week, the first wing of Hearthstone’s newest adventure was released, The Temple of Orsis. In this adventure, for each win you get two cards instead of the usual one. Because of this, this adventure will give out a lot of cards and I highly recommend it.

In this article, I am going to describe each boss and how I beat them.  [Learn the lore behind Malfurion Stormrage and his fellow Druid legendaries.] First off, you have Zinaar. His Hero Power is “Draw a card and give your opponent a Wish.” The Wish cards allow you to summon creatures, spells, specific cost cards or even more Wish cards for zero mana. His battle is fairly easy because of the free cards he gives. For both regular and Heroic, I suggest playing Zoolock. This allows you to have a strong board presence to deal with his creatures, since he will be playing some pretty strong creatures later on. Another deck that you could probably win with would be Mill Druid, since he is drawing a card every turn no matter what. Next, you have Sun Raider Phaerix. His Hero Power is “Whoever controls the staff is Immune.” Phaerix starts out with a 0/5 Staff that has “Deathrattle: Summon this for your opponent.” This makes him fairly easy to beat because you can become Immune. Yet again, I played Zoolock because you can quickly kill the Staff and after you become Immune, you can draw cards without taking any damage. In Heroic, his Hero Power is a little different. It becomes “As long as Phaerix controls the staff, he is Immune. Along with that, the Staff’s stats jump to a 3/8. I played a Priest deck around Silence, because you can Silence the Staff, removing the buff and the Deathrattle. Even though he will still be immune after you Silence the staff, it will be much easier to kill and won’t stay on the field, preventing Phaerix from becoming Immune again. Finally, you have the Temple Escape. This is the first boss where there is no life total for you to take down; it is a survival-based boss. You have to survive 10 turns, and throughout the battle, Reno will jump in with choices such as “Gain a Mana Crystal or Draw two cards.” This boss will play some pretty menacing minions, but you don’t have to kill his minions to win. So what’s the easiest thing to play? Freeze Mage. That deck is all about surviving and stalling the game. It is perfect to play on both normal and Heroic mode. Make sure you understand the mechanics of the boss though. For example, when Reno says “The ceiling is going to collapse,” that means that the next turn, ALL creatures are going to die. Make sure you don’t over-commit when you play your creatures or your removal spells on this turn. Now, something that was discovered about Discover. As Youtuber Kripparian popularized, when you play a card with Discover, you are 4 times more likely to Discover a class card. This changes a lot of cards such as Dark Peddler and Jeweled Scarab, specifically the latter, because it makes it stronger with different classes based on the three cost cards that the class has. Because of this, you can reliably play Jeweled Scarab and get about three different cards you might want. Finally, we are going to look at a huge meta change that wasn’t expected: Reno Jackson.

“We’re… gonna be rich.” You’ve probably heard that said many times by now. Playing Reno gives control decks an easy way to hold off against aggro decks that have been dominating the meta since TGT. Reno has had the most success in a version of Handlock that plays only one copy of each card. This works because Warlock has many strong cards that you can play. Another big reason is you can reliably find a card you are looking for because you can draw off of his Hero Power. What do you think the most influential card is going to be overall, and what card are you most excited with? Feel free to follow me on Twitter @McGuinnessMac, or add me on the NA Hearthstone server JMcG#1300.