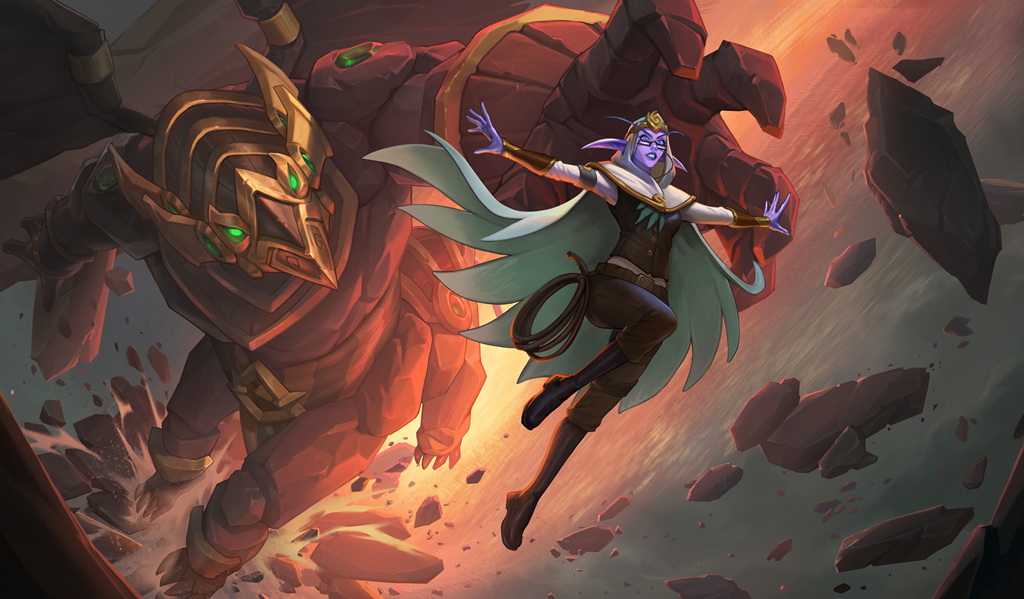 If you’re like most single-player Hearthstone fans, then you’ve been hard at work all month facing the Tombs of Terror.

After completing the first two chapters, odds are you’ll want to see what the third has to offer. You can get chapter three for $6.99 or 700 gold.

Chapter three will take place at an iconic landmark in Uldum called Khartut’s Tomb. If you played World of Warcraft, you may recognize Khartut’s Tomb from a questline in Uldum that involves Hearthstone celebrity Harrison Jones. During the questline, you have to help Harrison defeat some Pygmies that overtook a caravan.

This journey to Khartut’s Tomb will be much different from the one you took in Azeroth, however. For this chapter, players will be joined by the new dual-class Hero, Elise Starseeker. You can continue the adventure using Reno or Finley if you’d like, but most players will want to see what Elise has to offer. Elise will use Hero Powers and cards based on the Druid and Priest classes.

Just like her fellow adventurers, Elise comes with a plethora of unlockable treasures, Hero Powers, and decks. Elise’s starting treasure will be Starseeker’s Tools. This treasure costs two mana and allows you to Discover a minion and a spell. Both the minion and the spell discovered by Starseeker’s Tools will cost two less mana. For her starting Hero Power, you’ll be using Elise’s Might. This power costs two mana and has a choose one effect. Players can either gain +2 attack for a turn or gain two armor.

Just like every other Hero, Elise will have two additional Hero Powers that must be unlocked. To get the Starseeker Hero Power, you’ll need to gain 100 armor. Starseeker is a passive Hero Power that adds a Moonfire to your hand after casting two spells in a single turn.

Elise’s final unlockable Hero Power is Druidic Teaching. It costs two mana and allows you to heal a target for two. If the healed target is at full health, you get to draw a card. To unlock Druidic Teaching, you’ll need to cast 100 spells. Elise will also have three unlockable starting decks that you can obtain after defeating eight, 16, and 24 bosses.

When assembling your setup, you’ll want to make sure you keep this chapter’s twist in mind. For this chapter, the twist will be Plague of Death. This causes both you and the boss to start with an Eternal Tomb token. This token will start on the field and contains a random minion. After a certain amount of friendly minions die, your Eternal Tomb will summon the random minion it contained.

Elise’s starting Hero Power is incredibly powerful during the fights leading up to the Plague Lord and using it can lead to a number of early victories. You can also focus on playing around the minion contained inside your Eternal Tomb in the meantime. If you have something incredibly powerful inside your Tomb, you’ll want to sack as many of your own minions as you can quickly. A good way to do this is by playing your less impactful low-cost minions as soon as possible, then forcing the opponent to react by trading so they avoid face damage.

Your primary challenge during this run will be Xatma, Plague Lord of Death. Just like the Plague Lords from previous chapters, Xatma has numerous Hero Powers that rotate as you chip away at his 300 health. Xatma’s starting Hero Power, Foreboding Fate, costs zero and allows him to trigger a friendly minion’s Deathrattle. This means you’ll want to take care of his Deathrattle minions as quickly as possible so he isn’t able to trigger them multiple times.

After his first 100 health, Xatma’s Hero Power will switch to Death’s Embrace. This passive power causes the first minion for each player that dies in a turn to have Reborn. Trading will be very important while Xatma is using this Hero Power trading. You’ll want to maximize the value that you get out of his own Reborn perk by trading accordingly. Hold off on trading into a powerful Deathrattle minion if you know its resurrecting will be hard to deal with.

Xatma’s final power is Death’s Gate. This allows Xatma to deal one damage to all minions. If any die, it adds an Untimely Demise to his hand. Untimely Demise deals three damage to all enemies. Although this power may sound strong, it actually isn’t much of an issue as long as you aren’t using a token strategy.

One of the perks of using Elise for this run is the fact that she has so many options to deal damage outside of minions. You can use spells and weapons just as efficiently as minions to chip away at Xatma’s health. As long as you focus on playing around Xatma’s various Hero Powers, you’ll be out of Khartut’s Tomb in no time.