Disclaimer: From now onwards, until the release event is over for League of Explorers, all the Decks to Play articles are going to be about brews for the coming weeks of release with unreleased cards.

Hello cuties! This thursday we are getting our first wing of League of Explorers! And, despite having a lot of bad cards in it, we are going to be able to experience, first hand, the power of Dark Peddler!

The card is something people haven’t been discussing too much, as everyone is judging the card to be bad or terrible. I however, think otherwise! I actually think the card is going to be a major player in Warlocks this coming expansion and want to share with you guys the first build I made using this card!

A Little More About Dark Peddler

dark-peddler is one of the cards I am most excited about in this expansion, because I simply love versatile cards with multiple effects, and this one is just one of them! This card has the potential of doing so many things in one, and is bound to always give you something useful for every different situation you are in.

The keyword “Discover” works this way: you get to choose 1 out of 3 random options that are presented to you, and put that card in your hand. These options can only be from either your class or neutral.

With this in mind, you can notice how you are always able to pick something cool from it, meaning this card is a pretty strong cantrip. Want to deal with a big minion? 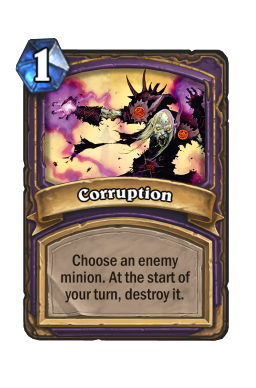 corruption can help you with that. How about killing a small one and drawing a card? Well,

mortal-coil is just the thing you need. Oh, nothing is going on and you need board presence? Well, do you want to be aggressive or defensive? You can also choose between

zombie-chow. Of course, the options aren’t always going to be great, but you’ll still get to choose, and that is just huge. On top of everything, you get a cute 2/2 minion as nice board presence!

Forget what I said about using Handlock as a base, I playtested the card this whole afternoon, and although the card performed great (as good as I expected) the other cards in the deck weren’t doing as good, so I decided to remake the whole deck from scratch and kept on making changes from that point. It started off as Midrange, Then Dragons, Then back to Midrange, and ended up as a Demon Control deck. The deck is wonderful, I haven’t lost with it in 10 games so I think I finally got the list right, so I decided to update it and share with you guys!!!

This deck has 2 very different playstyles that should be done according to each and every matchup.

You can either play it cool, drawing a lot of cards and dropping threats while maintaining a fair amount of cards in hand, just like a standard Handlock deck, like you would be doing against other Control decks in order to obtain the certain win.

But you can also play the super defensive strategy, dropping valuable minion and cards every turn, defending yourself from quick threats with better cards, winning the board early in the game just to drop big threats in the late game and overwhelm your opponent with better cards.

Regardless of opponent you are facing, this deck is supposed to win (or at least have even matchup) against every single deck in the metagame, and is the deck of choice for this weekend!

Mulligan with this deck is very simple, and you’ll always want the same cards regardless of opponent:

ironbeak-owl against Hunter and Paladin and

twilight-drake if you already have a good enough hand.

Alright now let’s talk a little about the deck’s fluid slots: The cards we can end up changing for other cards.

This deck has only a few of Fluid slots, the most notable ones are 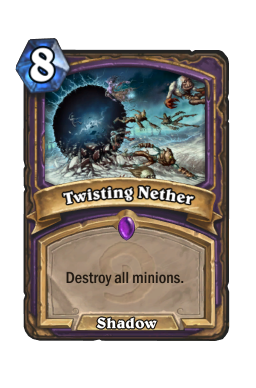 twisting-nether. I believe you can change these cards for cards such as

sylvanas-windrunner and the list goes on! Help me playtest the deck, and after playing the original list try messing around with these 2 fluid slots and let’s see if the deck can improve in those points!

Of course, there are a lot of other slots we can change such as

voidcallers and the pair of 5+ costed demons, but overall I think these cards are just not what we should be looking at for now, and that we can do much better changes first with these 2 slots.

There are also other lists we can end up trying with Dark Peddler, such as Zoo and Malygos Warlock, but I think this to be the best starting point to test the card out!

And this is it for this week! Unfortunately we don’t have many good cards to test in this first week of League of Explorers, so I am going to leave you guys with only one build. However, next week is going to be crazy, as we have a lot of new (and good!) cards being added to the game, so we’ll have tons of crazy brews to be testing out!!

Just to make sure you stay tuned next week, these are the good cards we’ll have added to the game(I am not even counting the bad ones!):

All of these cards have huge potential to be meta breaking cards, so we’ll have a lot of brews coming up next week! Don’t forget to stay tuned, you guys will be getting a lot of new surprises!

I hope to see you guys later next week with more League of Explorer’s brews!

Hey guys, just adding another deck idea I just had: The Highlander Warlock!

Why “Highlander” you must say? Because “there can only be one!”. It is a deck focused on the only class I could remember that runs so many 1-ofs in the game, which means it is the only possible class to run mister

This deck is so big it even makes the  end of the article looks strange, haha!