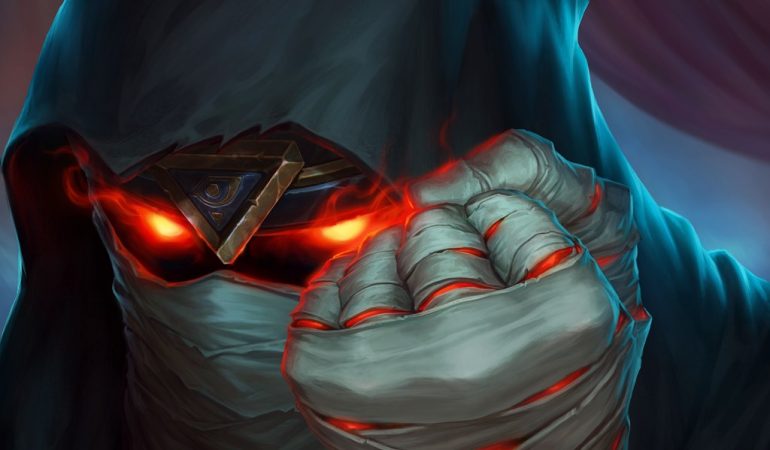 To achieve this feat, Dog used a unique version of Freeze Mage that features many of the new cards and mechanics from the Rise of Shadows expansion.

Freeze Mage is a deck that aims to stall out your opponent’s threats while setting up your own path to victory. Rise of Shadows introduced a ton of new tools for the Mage class, but there didn’t seem to be a clearly dominant version of Freeze Mage until just recently. While we can never hope to pilot this deck as good as Dog, we can still take a deep dive into some of the new cards and packages that seem to make it work.

Ray of Frost is one of the coolest (pun intended) Mage cards to come with the Rise of Shadows expansion. The card makes use of the new Twinspell mechanic, which adds another copy of the card without Twinspell to your hand after playing the original.

Ray of Frost is a one-cost Twinspell card that Freezes a minion. If the minion is already frozen, you deal two damage to it instead. If you desperately need to deal two damage to a minion, you can always use Ray of Frost one after the other. That being said, the deck has a number of other cards that synergize perfectly with Ray of Frost to help you get the maximum value out of it in a variety of situations.

This deck runs two copies of Blizzard, Frostbolt, Frost Nova, and Doomsayer. All of these cards have potential value when played alongside a single Ray of Frost. You can use Ray of Frost to freeze minions that would potentially kill your Doomsayer and you can use it to do damage to minions that have been frozen by other Freeze spells like Blizzard or Frost Nova.

Ray of Frost will also be the main card you use to generate Fireballs from Archmage Antonidas that will often be used to finish off your opponent. One of the keys to using this deck successfully will be getting the most value out of your Ray of Frost spells, and learning when you absolutely have to Freeze your opponent’s board.

You’ll regularly be using Conjurer’s Calling on one of the two Mountain Giants you run in this deck. This will give you the potential to create an army of beefy minions to march right through your opponent. This deck doesn’t use Khadgar to get the maximum value out of Conjurer’s Calling, but it doesn’t need to.

Your win condition with this deck (in most cases) will revolve around playing Alexstrasza to drop your opponent’s life total drastically all at once. Hopefully, you’ve been able to play Luna’s Pocket Galaxy at some point and get to play Alexstrasza and Antonidas for one mana each. You’ll then use your spells to amass a hand full of Fireballs and finish off your opponent by any means necessary. While the Fireballs are the clear path to victory, you often end up swinging out your opponent with the Giants generated by your Conjurer’s Calling.

You can import this deck into your collection by copying the following code: AAECAY0WCMUEigeQB7gIvuwCxvgCoIADip4DC4oByQOrBMsElgXhB/sMw/gC24kDg5YDn5sDAA==