Welcome to another DarkArbiter’s Weekly Deck Spotlight, where I bring you an in-depth analysis of a recently played deck. For more information on what this article entails, check out my first Spotlight article here.

The Blizzcon Last Call Tournament was this weekend, bringing in over a thousand players from the NA servers. It was quite enjoyable to watch, and there were several decks showcased that drew my eye. In the end though, I can only pick one to showcase myself, so I settled for the deck that caught my attention the most, a Priest deck played by Swishface against Funkyworm during the “Round of 16”.

This match was a fairly back-and-forth event that could have gone either way, with both players utilizing different strategies in how they play their decks. In the end though, Swishface’s deck prevailed over Funkyworm’s Handlock, leaving Swishface with a victory as well as a seed in the Blizzcon Qualifier.

In addition to that, what helped the deck stand out was that Amaz, probably one of the most famous Priest players and a caster for this tournament, was also surprised by it. Since this is something that doesn’t happen too often in tournaments, I knew I had to give it a second look.

As of now, there are no official decklists displayed for each player for the tournament. Fortunately, Swishface played every single card in his deck during the course of the match, allowing me to go back and reconstruct it card for card.

So without further delay, let’s take a look at Swishface’s Priest deck.

Well, this is certainly a deck list you don’t see every day. It runs much like a Midrange list would, having a strong mid-game presence to counteract aggro lists while sacrificing much of its late-game strength in the process. This doesn’t mean it has no late-game strength though, and some of the cards presented can actually make a huge impact late-game more so than in the early game.

However, this isn’t your typical Priest deck; most Priest lists being ran are either the typical Control Priest deck or the fairly new Deathrattle Priest. The later is a fairly new deck made possible after the release of Naxxramas. It utilizes synergy between

Undertaker and various other deathrattle minions to aggressively maintain board control and aggression throughout the early and mid-game.

This is more akin to what Swishface’s deck is like, so a comparison between the two is more applicable. In particular, the card choices between the two decks will be of special note as well as how they change the play style of the decks in question. For now though, we need to see how they’re similar.

If you’ve ever played Priest, the standard cards you see in almost any deck should be obvious.

For minions, we have

Northshire Cleric making her usual appearance. Generally, this card has almost a dual purpose; she can be dropped early-game to stave off aggressive decks for a turn or two, or utilized in the late game against control decks as a drawing mechanism. Either situation is a correct way to play her, as your opponent will focus attention on removing her once she is out.

Zombie Chow also makes an appearance as a one-of in the deck. Many Priest decks have been running two copies of this card recently, especially the deathrattle decks that are out now. However, I believe the inclusion of only one here makes sense; you only really need one to help you fight for board control in the early-game. It’s a dead card in the late-game, so while including only one may decrease your chances of drawing it in the early game, it also decreases the chances of you top-decking it in the mid and late-game, where the card is next to useless at.

We also have the inclusion of the ever-popular

Dark Cultist. One of the top five cards to come out of Naxxramas, Dark Cultist has been an almost auto-inclusion in every Priest deck due to his amazing stats. Two copies of

Sludge Belcher, another top card from Naxxramas, makes an appearance. This card has amazing stopping power and as a result has almost became an auto-include in almost all control decks and even in some mid-range lists.

Looking at the Legendaries, we don’t have anything really surprising there.

Sylvanas Windrunner. Both of these perform spectacularly in the late-game and give the deck lasting power, especially against some of the other Legendaries that are typically being ran at the moment.

Cabal Shadow Priests. Normally, most Priest lists run only a single copy of this card. The inclusion of two means that Swishface built this deck to perform better against more aggressive decks, such as Zoo and Hunter lists. Given the popularity of each deck both on the ladder and in tournaments, this is a smart play as it improves the deck’s odds of victory against both, although it will normally reduce its chances against control decks, which are also fairly popular at the moment.

For spells, most of the list is pretty standard as well. 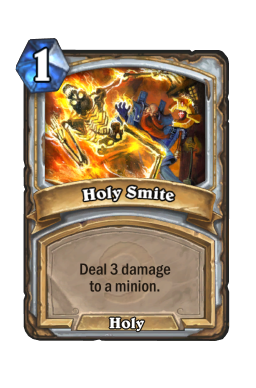 Shadow Word: Pain are tech choices that improves your odds against aggressive decks, while

Power Word: Shield is a solid buff card that cantrips itself, and is often played with Northshire Cleric or combo’d with

Shadow Word: Death is pretty standard for dealing with most late-game threats, as Priest doesn’t have many other ways of dealing with them. This gives Swishface’s deck more resiliency against control decks in general and will help him hold on in the late-game, although it does little to help against aggressive decks.

As always, this deck also provides some unique card compositions that normally aren’t seen in these specific lists. Some of them may be included in other decks, such as Control Priest, but their inclusion here is odd. 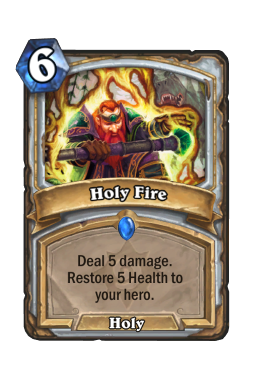 Holy Fire: This card’s inclusion is a bit curious. Normally, it is mainly seen in late-game Priest decks like Control, but there are two copies of it here. This card is valuable for two things; holding out in the late-game, and aggression in the later part of the mid-game.

Either of these two may be the reason SwishFace included this card in his deck, and overall it lends to helping the deck’s resiliency in the late-game, which proved vital to SwishFace when he faced FunkyWorm’s Handlock. 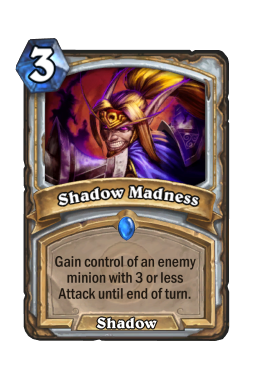 Shadow Madness: A card that is normally sporadically seen even in Control lists, Shadow Madness can lead to some interesting trades. The value of this card is questionable at best, as you need your opponent to have a relatively stable board for it to be effective.

Nevertheless, this card can provide an immediate tempo switch when this does occur, and will generally help against aggressive decks to thin their ranks. Probably the most enticing target for this card is Sludge Belcher, as if you kill it off with a trade you get to keep the slime from its deathrattle, providing a huge tempo shift.

Shade of Naxxramas: Over the last few weeks, I’ve slowly seen more and more decks utilizing this card and the potential it can bring when played, and here is no exception. While not necessarily the flashiest card to come out of Naxxramas, the Shade has been slowly proving it’s worth, as it will generally provide very favorable trades when played early in the game. I would go so far as to say it has almost become a staple of Midrange decks, as the last few tournaments have shown just how useful this card can be when included in these lineups.

Chillwind Yeti: Last but certainly not least, we see what is probably the most puzzling card being included in the entire deck; a pair of Chillwind Yetis staring at us right in the face. Normally, this card is traditionally ran in several mid-range lists, as you will find no better stats for the cost. He is a solid vanilla body for four mana, and will often make favorable trades throughout the game.

However, Yeti is normally almost never seen in competitive Priest decks, and even Amaz, one of the casters for the tournament and famous for his Priest decks, was put off by its inclusion into the list. His reasoning for questioning the card’s inclusion was quite solid as well; why include this in your deck when

Auchenai Soulpriest is just as effective and can even be more effective?

The reasoning for this being the case is because it can turn your hero power into an offensive weapon, which normally is pretty important when you’re playing Priest. Generally, this card fits into the spot of Priest’s four-drop minions.

Recently, Priests have been cutting one or both of the Soulpriests, but only because they have other uses for the deck slot. If you plan on using a four-drop in your deck, Soul Priest just seems like a better idea than a vanilla minion that can’t synergize with your cards in any way. The lack of

Circle of Healing might be somewhat of a reasonable explanation for why it wasn’t included, but even without the Circle Auchenai Soulpriest is still somewhat more effective against aggressive decks than the Yeti is.

Yet, despite all of this, Chillwind Yeti is still a fairly decent card. Its inclusion in most mid-range decks is a testament to its effectiveness, and its vanilla stats are generally quite difficult to deal with during the mid-game. It is also more effective against the Priest mirror-matchup in general, as all four attack minions are. It is also possible that Swishface does not own Auchenai Soulpriest, which would also explain the inclusion of Yetis.

Overall, the deck is a nice answer to some of the popular decks that have shown up at tournaments. One or two of the inclusions may be questionable, but overall the deck is pretty solid and performed quite well in the tournament, as evidenced by Swishface using it to make his way through to the top 16 players.

The deck is built to perform well against Hunter and other aggressive decks, but will probably not fare quite as well against decks like Miracle Rogue and Warrior Control, both of which are also quite popular both on the ladder and in tournaments. In addition, while it did emerge victorious against a Handlock deck, that does not mean it is favorable against Handlock, and I think in fact that the deck will normally give this deck quite a bit of trouble.

In the end, I feel comfortable recommending this deck for play on the ladder. It provides another option for those facing a Hunter-dominated section of the ladder and, while not being the end-all Priest deck, it has its strengths as well as its weaknesses.

That wraps up this weeks WDS. The Blizzcon Last Call Tournament was yet another interesting event that has come out in the past few weeks, and players like Swishface made it all the more entertaining to watch with some of their innovative decks. As always, I hope you enjoyed the article, and tune in next week for another deck to come under the Spotlight.

If you have questions or comments about the article or the deck, feel free to email me at [email protected] or just leave a comment in the section below! In addition, if you have a deck list you would like to see in a future deck of the week article, feel free to message me as well, and I will showcase it if I can.