Hello and welcome to our final edition of League of Explorer’s Brews to Play! Today I am going to make something slightly different than what I did with other wings and release a bigger bunch of awesome decks to be played.

This last wing we are getting a whole lot of playable cards, and since this is the last time we’ll be brewing with unreleased cards, we shall make our bests to give you guys the highest number of playable decks here.

elise-starseeker is a card that has been said as trash multiple times since it was announced, and in part it can be. However, I can’t help but think the card has a lot of potential to make Full Control decks viable, decks that we use to call “Fatigue” decks, that are focused on surviving and Controlling until the opponent run out of cards. The most recent Fatigue deck to make it to the Top Legend was a Fatigue Warrior featuring

reno-jackson and a bunch of 2-ofs. In that deck, Reno was a card to be played later in the game (after both players run out of cards to draw), and didn’t have much use outside of that.

However, we were able to experience first hand the power of real Control decks, which is something that hasn’t happened in Hearthstone before.

Elise Starseeker allows those decks to play with 29 Control cards and 1 Win condition. Being able to be the defensor consistently and exhaust your opponent out of threats should be a lot easier when we don’t have to worry about having a bunch of high costed Legendaries clogged in our hand early in the game as a Control deck, and after we obtain that Control we can easily become the aggressor with limitless threats just by playing the golden-monkey.

There are 2 possible Real Control classes in Hearthstone: Priests and Warriors. Both classes can play 28 Control cards combined with

justicar-trueheart, to have a bigger boost in survivability, and

elise-starseeker to have higher odds of winning the ultra-late game. Since Warrior is the deck we already know to be 100% functional, I believe it is the best starting point to test Elise.

There is something about this card that I like very much.

novice-engineer used to be a 1/2 and was deemed an overpowered card, it was then nerfed into a 1/1 and became unplayable. This card is much better than pre-nerf Novice Engineer, since it guarantees to give you a good card (There are very few bad Deathrattle cards), lets you choose the card you want to use, and doesn’t get you close to fatigue. All of this makes me believe this card has a lot of potential to be a staple in future Control Priest decks.

The fact this is a 1/2 rather than a 1/1 makes it so this won’t die to ping as well as trade with Paladin’s 1/1s, which although might not look like much, it is indeed a big deal.

Museum Curator is relevant both later as well as early in the game, and has higher odds of giving you a

dark-cultist, curving perfectly. Keep in mind the Discover ability has 4x more odds of giving you a class card than a neutral one, and Dark Cultist is Priest’s only Deathrattle. Other neutral Deathrattles are almost all good, with very little exceptions that you can simply skip during the choosing phase.

Thinking about that, I decided to make the perfectly starting point to playtest Museum Curator in Control Priests, which is the deck you are seeing right now. You really didn’t think I was going to leave a Full Control Priest deck out of this, did you? 😀 This is  the Priest’s alternative list to the Warrior one posted just above us!

Playing this deck seems a little more complicated than playing Fatigue Warrior, things like Entomb should be used on anything that imposes trouble, not just be saved for big Legendaries. Having trouble dealing with a Belcher? Entomb it, you’ll have tons of responses for that Dr. Boom anyway! Curator gives the deck more proactive plays (2 of them!) and a much better curve. Hope you guys enjoyed this deck :3 and in case you want to play Priest this week, this is the deck for you!

One of the most hyped cards in this expansion:

Desert Camel, if anything, this card is going to make

zombie-chow be more played in other decks simply because of its existence. We still can’t tell if this is going to be true, but this card for sure looks like a strong playable one. Most players like this card but you have to remember this both won’t trigger the 1-cost Battlecry as well as is very likely to give your opponent a free Zombie Chow. Sure, this won’t matter if we end up getting a Leper Gnome for our troubles, and decks that are supposed to give Hunters the biggest trouble (Warrior Control and Midrange Druid, which happen to be very popular decks) won’t be getting anything from this (unless they, suddenly, start playing a copy of Zombie Chow in their decks, which will make them overall less consistent in other matchups). The biggest catch about this card, is that the more popular it gets, the less good it gets. 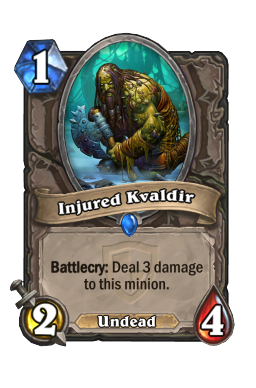 injured-kvaldir?? wow that seems so broken! Desert Camel also has the potential to bypass negative battlecries like the Kvaldir’s, and in case the card doesn’t become playable now because the lack of advantage you can get out of it, it can end up becoming playable in the future for this reason if new 1-drops with good bodies and negative battlecries get released.

This is a Midrange List I have been working on to take full advantage of that effect. If you want to playtest the Camel as bad as I do, this is the decklist for you!

PS: “Oh but Nuba, we would only have the Kvaldir to pull from the Camel, wouldn’t that be inconsistent? Well, the math has already been done multiple times with

mad-scientist and only 2 Secrets on multiple decks, and Hunters don’t draw cards. Just remember to never keep Injured Kvaldir on your starting hand.

Face Warlock! Face Warlock is something we haven’t seen since classic, and might make a comeback now that Warlocks have access to 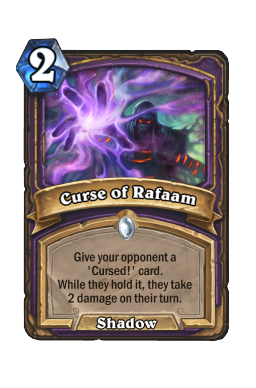 curse-of-rafaam. The catch about this card is that it generates tempo, forcing the opponent to either Take 2 extra damage or to spend their mana unwisely. This card has a lot of uses, and shines the most against Face Decks that play around fully spending their mana until turns 6-7, against these decks a well placed Curse of Rafaam can end up dealing 10 Damage, sometimes even more, winning you the game.

This deck focus on playing a bunch of minions that deal Direct damage and have Charge, this deck also has a lot of reach and Warlock’s hero power allows the class to refuel easily against more Controlling decks.

There isn’t much information to add regarding a Face deck: GO FACE! In case you want a different type of aggressive deck to playtest this week, this is the deck for you!

Woah, this week’s Brews all seem just too awesome not to be played! If you have time, I would suggest you to play all of them, I know I will!

I hope you guys have enjoyed this ride, it was an awesome one! Keep an eye out this weekend for the awesome comeback of the “Decks to Play” series, which will come with the most successful decklists we have had on the ladder for you guys!

I love you all cuties, what were your playtesting results? Any other card you will be playtesting this week? Want to say anything? The comments section is just for you, and I will be reading every single comment you guys make!