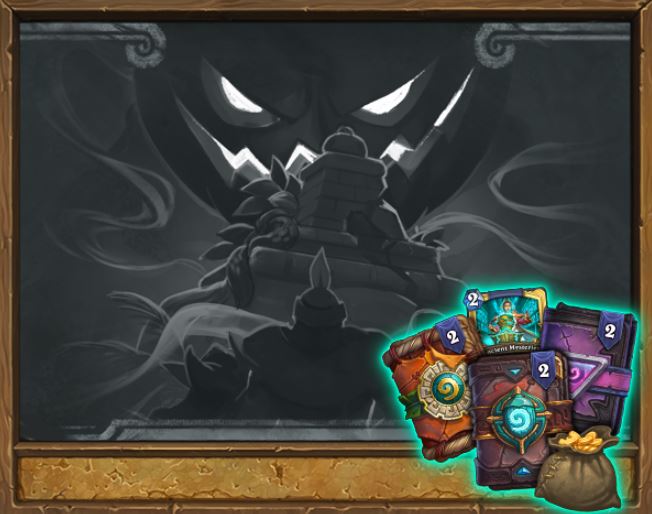 Hearthstone fans are in for one spooky holiday this year.

Blizzard has revealed a ton of details concerning the game’s new Halloween-themed event, Doom in the Tomb. Although the League of Explorers may have bested Rafaam’s plans in the Tombs of Terror, there’s still work to be done in Uldum’s Haunted Temple. Reno and Rafaam have both rallied their respective teams with the hope of discovering powerful ancient artifacts within the temple’s halls.

Players will be able to join Reno and Rafaam starting Oct. 8. The event will last nearly all month, finishing on Oct. 30. All three weeks will be stuffed with a variety of Halloween-inspired events and brawls to keep the spooky spirit alive. A major highlight of the event will be three separate Tavern Brawls, all of which are extra spooky in nature.

The first brawl debuting with the event is called Doom in the Tomb, Part 1. During this brawl, players will get to team up with the League of EVIL to face the Haunted Temple. The temples will be filled with some of the best bosses in Uldum. This brawl will be timed and players will be able to race to set the record for the fastest run. If you complete a run in under an hour, you’ll receive a Rastakhan’s Rumble card pack. Doing so in under 40 minutes will earn you a Golden common copy of Ancient Mysteries. You’ll also have the opportunity to earn six packs of cards and additional gold during the run.

The second Tavern Brawl of the event will be Doom in the Tomb, Part 2. This brawl will work the exact same way as part one, only with a different cast of characters. Instead of heading into the brawl with Rafaam and his misfits, you’ll be venturing alongside the League of Explorers. Completing this run in under an hour will fetch you a Golden Common Temple Berserker. Temple Berserker is a two-cost 1/2 minion that has +2 attack while damaged, as well as Reborn. Completing the run in under 40 minutes will earn you a Golden Rare Generous Mummy. You’ll also have the chance to earn two packs of cards and an Arena ticket during the run.

The week three Tavern Brawl for Doom in the Tomb will be The Haunted Carousel. This brawl looks like it’s based on the popular Headless Horsemen boss from Hearthstone’s lore parent World of Warcraft. During this brawl, minions will constantly rotate board positions. Players will also be in control of a Dreadsteed card. Dreadsteeds are four-cost 1/1 Demons with a Deathrattle that summons a Dreadsteed at the end of the turn. You can expect this brawl to be super chaotic. Summoning 100 Dreadsteeds will earn you a Rise of Shadows card pack.

This event will also introduce Dual-Class Arenas. When you start an Arena run during the Doom in the Tomb event, you’ll choose a Hero and Hero Power. Card offerings will then come from both of your chosen classes, plus neutral cards. If you happen to have an Arena run active when the event goes live, you’ll have your run terminated, but will receive a ticket as compensation. Weeks one and two of the event will reward an Arena Ticket on login. The new Arena rotation will contain cards from Saviors of Uldum, Rastakhan’s Rumble, Kobolds and Catacombs, Journey to Un’Goro, League of Explorers, as well as the Basic and Standard sets.

Doom in the Tomb will also debut two-pack bundles called Hex and Flex. The Hex Bundle is based on the League of EVIL and includes 20 Rise of Shadows card packs and a random Rise of Shadows Legendary. The Flex Bundle is fronted by Reno Jackson and will include 20 Saviors of Uldum card packs. It’ll also feature a random Saviors of Uldum Legendary. The Hex and Flex bundles both cost $19.99.

At the start of each week during Doom in the Tomb, you’ll unlock a new Legendary quest themed around the event. These quests will reward you with card packs from one of the current sets or a large amount of gold. Be sure to log in during the event because doing so will earn you a bundle of five packs. Log in anytime during the event to earn two Saviors of Uldum packs, two Rise of Shadows packs, and one Rastakhan’s Rumble pack.

The spooky fun begins on Oct. 8.