Hello guys, Giordy here! Welcome to another one of my reviews!

I am a season 3 and 6 legend player and a huge Hearthstone fanatic.

Today I want to review a hunter deck that recently brought one of the most popular Hearthstone players, Jason “Amaz” Chan, to legend rank n° 1 in season 8 NA ladder. Amaz is known for his love towards the priest class: he was at the top of the ladder with his priest decks even when Anduin was the worst class in the game, during the first seasons of Hearthstone.

You can find more information on this player here. You can also check out his YouTube channel, Twitch ,Facebook and Twitter page. Now let’s talk Hunter!

Before Blizzard nerfed the card

unleash-the-hounds unusable, everybody was afraid that Rexxar was going to die, leaving the scene of Hearthstone forever. The truth is, though, that after Naxxramas and its deathrattle-themed minions hit, Rexxar has become a force that is hard to deal with, regardless of the combo. Hunter has arguably the best mana curve in the game as of now and, thanks to Rexxar’s hero power and damaging spells such as

kill-command, is capable of dealing huge amounts of damage in very few turns. Combine that with an array of fast, sticky, pesky, deathratlled minions and you will really have a hard time dealing with this guy.

I invite you to check out LightsOutAce’s latest article, in which he points out that

freezing-trap, make the hunter class overpowered in the current metagame. I personally agree with him, and given the rise of warriors that I have witnessed recently, I believe even more that the class still needs to be dumbed down a little.

Nevertheless, today I am not here to criticize the class, but to present you its current strengths in the form of Amaz’s latest build.

This build doesn’t differ much from the most common builds we have been seeing. As with all hunter builds, it has a great, fast starting hand (Undertaker, Webspinner, Leper Gnome, Haunted Creepers, Mad Scientist), meant to dominate the battlefield with sticky minions so the game can uncontrollably snowball into a defeat for your opponent. I believe that the cards I just mentioned are basically used in every hunter deck you see around. You will also see everywhere cards such as

kill-command. If we exclude these, every player complements the build with different cards, depending on wheter he wants to be more aggressive or midrange-ish. Face Hunters will use

arcane-golem, while most hunters will use

The lastest tendence in hunter builds has been that of including Sludge Belchers in the deck: it is a choice that I personally approve, because Sludge Belchers are pesky, sticky minions that have a great stopping power against other aggro decks. Moreover, their use is not as conditional as that of

houndmaster, whose ideal use is dependant on whether you have a beast on the battlefield or not. Amaz includes 2 copies of

sludge-belcher in his deck, since it’s a minion that is always reliable, and only one copy of Houndmaster.

As I stated already, basically every hunter player includes 2 copies of

eaglehorn-bow in their decks and a number of traps that varies from 3 to 5.

snake-trap are utilized  depending on each player’s playstyle and deck build. Since Amaz decided to undertake the token route, Snake Trap is the trap that best fits in this kind of playstyle. If the opponent doesn’t have many mass removals, or has already used most of them, it is hard to come back from a

unleash-the-hounds combo, or from 3 snakes buffed by knives or houndmasters. It is noteworthy that even if all these cards combo in an excellent way with Knife Juggler, this little gnome is not always likely to survive to tell the tale: this is why there is only one copy of it in the deck; because its use, although extremely valuable, is not as reliable as that of other minions. 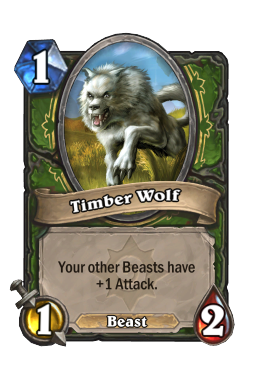 timber-wolf: given the high amount of tokens you can generate with snake traps and hounds, a +1 buff to all your tokens can sometimes make the difference between a victory and a defeat, or it can help you clean the board a lot more easily, especially considering the fact that there is only one copy of

Savannah Highmane is arguable the best 6-mana-cost minion in the entire game: when you drop it, your opponent will certainly have a hard time removing it entirely. It may not be as sticky as

cairne-bloodhoof, but it is far more dangerous if left on the battlefield. There is no reason not to include the lion king in a hunter deck, unless it’s a face hunter.

Since Naxxramas hit, almost no one has been including

tracking into their lists: this is not because the card is not useful, but there are so many good, cheap drops to use during the first turns that you don’t really need to “waste” one mana to thin out the deck and get a specific card you might need. Instead of Tracking, 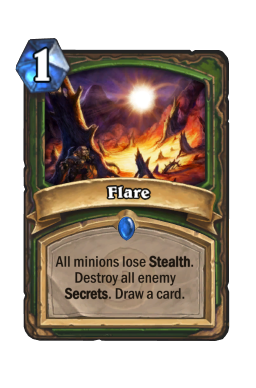 flare has been a more popular choice: it is a so called “cantrip,” it draws you a card, it reveals stealthed minions (bye bye

gadgetzan-auctioneer) and, most importantly, it reveals enemy secrets. The secrets revealing thingy has caused many players to complain about the card, because it not only helps against the mirror match, but it gives Rexxar a clear edge against other secrets-using classes, such as Mage and Paladin. Though I personally like to run two copies of it, Amaz chose to only include one in his build in order to have more space for other cards.

I am not going to write an in-depth mulligan guide, because the mulligan strategy is approximately the same against all your opponents and, besides that, I believe that playing hunter is a very easy task right now. If you guys have any doubts or concerns on how to play the class correctly, I invite you to check out Spark’s “Huntertaker guide” : he is a real expert when it comes to Rexxar and you will certainly find his guide extremely helpful.

I have been really enjoying the hunter class and I believe that this is the best timeto use it, because it is currently in its greatest strength. The class has the best mana curve in the game, matches are quick and its tactics work well against most classes.

I really like Amaz’s latest build, although I am less inclined to go the token route. I hope you guys give this amazing build a spin and let me know if you liked the review!

As always, if you have any suggestions, tips, or questions, feel free to write in the comments section below.