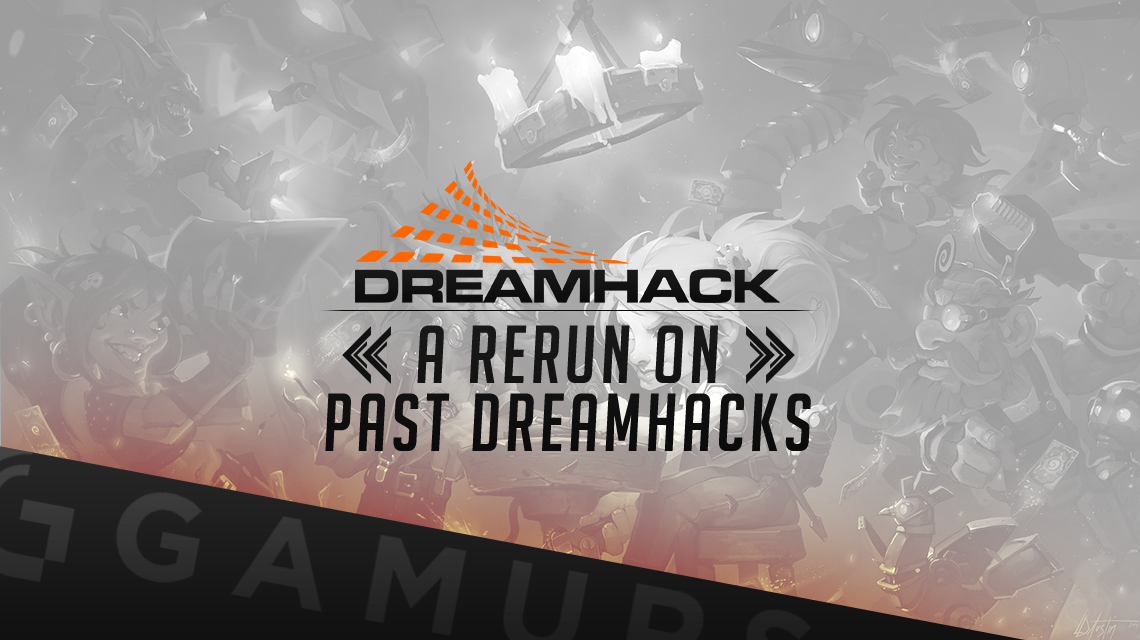 DreamHack is a LAN party widely known for its gamingcompetitions. DreamHack holds the world record (as recognized bythe Guinness Book of Records and Twin Galaxies) for the world’slargest LAN party and computer festival. In this article, we willtake a look back at all of the past DreamHack eventsinvolving Hearthstone.

The first ever Hearthstone eventorganised by DreamHack was Bucharest 2014, which featured a$10,000 prize pool. The event was hosted and commented by a panelof experts composed of Octavian “Kripparrian” Morosan,Dan “Frodan” Chou and Tudor “ptz”Pițigoi. The winner of the event was Petar “Gaara” Stevanovic,who cashed in on $4,000 and made his name known with the firstmajor win of his career.

Less than two months later, we had the Viagame HearthstoneChampionship, which saw a huge leap in the prizepool with $25,000on the line. The winner of the event was Dima “Rdu” Radu, whomanaged to get his own first big win in a tournament andtake the lion’s share of $10,000 from theprizepool. Rdu most recently won DreamHack Summer2016 to become the only two-time DreamHack HearthstoneChampion in the history of the event.

Up next, Valencia Hearthstone Tournament was organised. Javier”Thalai” Dominguez, a local Spanish player, cashed out with €1,500 by winning the event, which saw nine local players in the top16.

In the fall of 2014, DreamHack Masters Bucharest tookplace and featured another $10,000 prizepool. Thijs”Thijs” Molendijk was the star and triumphed in the event bydefeating the first ever DH Hearthstone Champion, Gaara.

At the DreamHack Hearthstone Championship, Thijs wasn’t solucky. He made it to the finals of the tournament, but waseventually the runner-up to Aleksandr “Kolento” Malsh. Kolentoclaimed a $10,000 prize by winning the tournament.

2015 was a busy year for DreamHack, as they organised no lessthan six events.

DreamHack Summer 2015 would mark the first time that thechampion would not come from Europe, and it would also set thehighest prizepool to date of $40,000. Thefinal was between American player David “Dog” Caero andChinese Wang “Tiddler Celestial” Xieyu, with the latter winning theseries.

In DreamHack Valencia 2015, the title would return in Europeanhands. In an all-English finals between James “Greensheep” Luo andLewis “Blackout” Spencer, Greensheep walked away with achampionship and $5,000.

With 2015 coming to an end, DreamHack Winter 2015 would crown anon-European champion for the second time in its history. Ryan”PurpleDrank” Murphy-Root, the 2015 HWC – Americas Champion, tookthe title and $12,500 in Jönkoping, Sweden.

The first event for this year, the ASUS ROG 10th AnniversaryTournament, was hosted by DreamHack at Leipzig. Jon “Orange”Westberg managed to win the event, being the only non-German playerin the top four, after winning against Jan “SuperJJ” Janßenin the grand finals.

Just over a month ago, DreamHack Austin took place. For thethird time we saw a non-European champion, as local Keaton”Chakki” Gill of Team Dignitas won the event and cashed out with$8,000 and 15 valuable HCT points.

DreamHack has offered the possibility to many players to provethemselves and make a name, as they organise big and prestigiousevents that everyone can take part in. So if you are looking for away to get into competitive Hearthstone, then you should be on thelook out for the next Grand Prix tournament at DreamHackValencia from July 14-17.