Microsoft is moving forward with its cloud gaming revolution by bringing the service to Xbox One and Xbox Series X/S later this year.

The news dropped during the Xbox Gamescom 2021 presentation, with the company announcing console cloud gaming will be enabled for Xbox Game Pass Ultimate members this holiday season.

With this feature, players will be able to easily play more than 100 games in the Xbox Game Pass library without having to download them. This includes everything from multiplayer games to indie titles.

Not only will this give Xbox users instant access to the Game Pass catalog, but Xbox One owners will also be able to play next-gen titles like Microsoft Flight Simulator on their device. This should limit strain on the older console models, letting players experience newer games with fewer issues if they can’t upgrade to a Series X/S.

Xbox has currently confirmed it will gameplay running at up to 1080p and 60fps across all platforms, which includes Xbox Cloud Gaming on PCs, phones, and tablets.

Once the feature rolls out, players will be able to clearly see which games are playable from the cloud thanks to a small cloud icon that will be displayed on each title card. From there, they can choose to install the game or play it from the cloud. 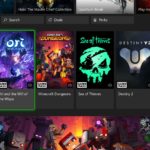 Microsoft plans to begin testing this fall through the Xbox Insider program, which will let users try cloud gaming and give their feedback on the service.