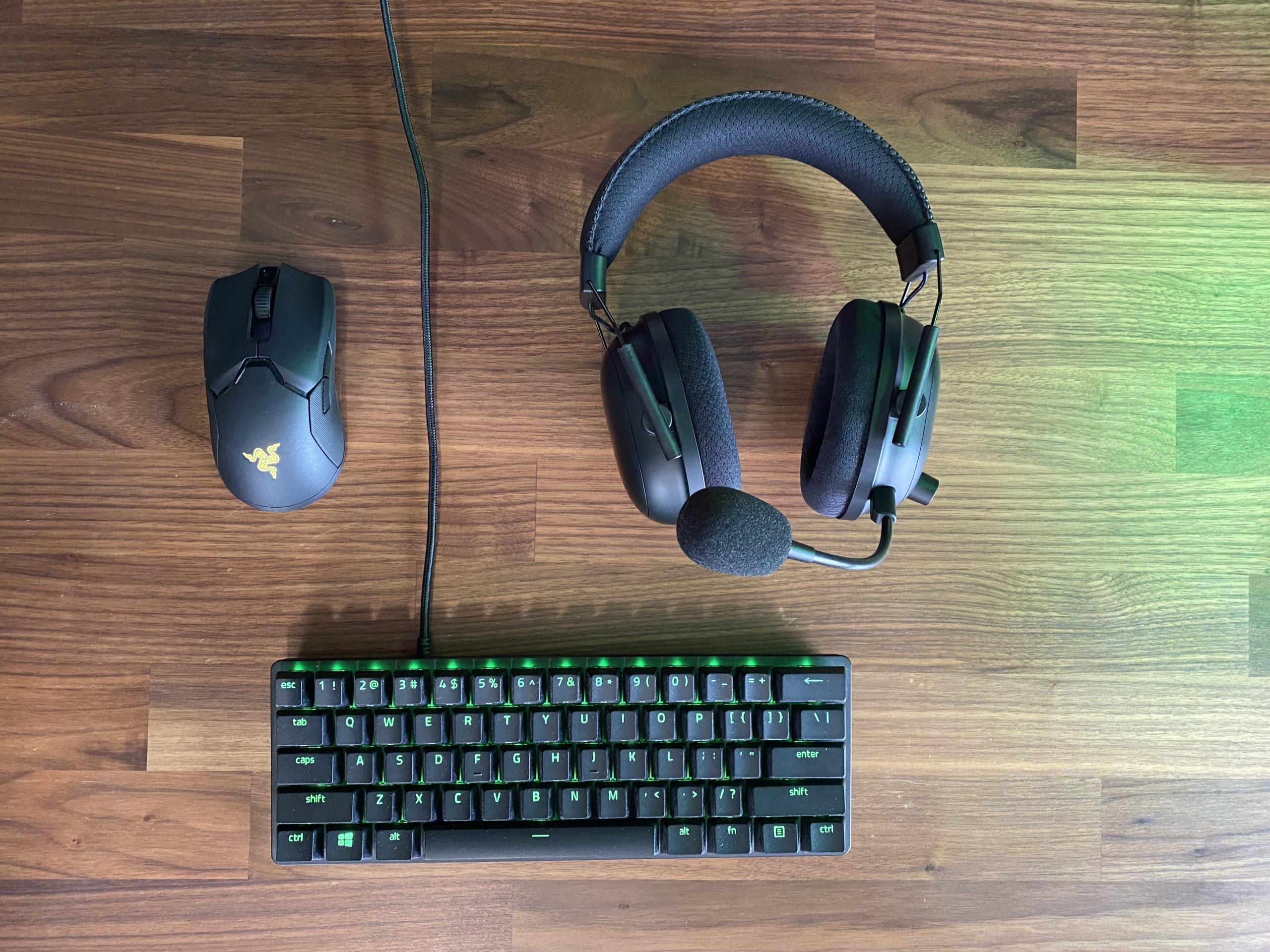 Over the past two years, Razer has consistently proven its dedication to innovation and support of esports professionals. While Razer has always maintained a steady pace in the PC peripheral market, it recently made significant strides to up its competitive product portfolio.

The Viper Ultimate launch in 2019 gave esports professionals a lightweight competitive mouse option without the polarizing honeycomb design. Razer’s early adoption of a solid, lightweight mouse design was a massive step in the right direction. The company then followed up the Viper Ultimate with the Huntsman Mini, a 60 percent iteration of their wildly popular Huntsman keyboard that caters directly to esports athletes who require more elbow room and a lighter carry-on. Finally, Razer gave players an update to its Blackshark headset line with the Blackshark V2 Pro Wireless headset.

Gaming headsets haven’t always been a high watermark for Razer, but that seemingly began to change with the Kraken Ultimate. Since then, Razer has launched several new iterations of the Blackshark headset, the most interesting being the Blackshark V2 Pro Wireless.

This headset is easily the standout of the Razer esports lineup. It has an understated design, a fantastic feature set that includes a removable microphone, quality output, and passable input improved with the Synapse software. Plush memory foam earpads create a snug seal around the user’s ears and help isolate noise, creating a nearly distraction-free experience. The Blackshark V2 Pro Wireless has the most comfortable earpads on offer from Razer. The same material is used in the headband construction, but the foam seems far less dense than on the earcups. Combining the comfort of the earpads and their passive noise isolation, we can see why esports organizations and players are fond of this headset.

Razer equipped the Blackshark V2 Pro Wireless with its Triforce Titanium 50-millimeter drivers said to aid in tuning highs, lows, and mids on an individual basis. To take full advantage of this headset, users will want to use the Razer Synapse software. Even something as simple as enabling the bass boost can send the V2 Pro Wireless into another dimension. Not every preset here is gold, and we’d encourage users to really spend some time dialing in their preferences before settling on a preset. Our reviewer was pleasantly surprised that footsteps came in clear in a game as auditorily crowded as Call of Duty Modern Warfare, even with the Bass Boost active.

The headset’s build quality seemed solid at first but began to exhibit some rattle after about two weeks of consistent use. It sounds like the rattle is coming from the metal adjustment prongs that extend from the band. The rattling wasn’t noticeable in-game and didn’t hinder performance whatsoever, so it’s certainly not a deal-breaker, but if you’re sensitive to this type of imperfection, then it is something to consider.

Razer’s simplistic onboard controls are some of the easiest to use and are nearly fool-proof. Because the volume knob, power, and mute button all have different shapes and feels, it’s clear what control you’ve got your fingers on without second-guessing. It’s a small but important aspect of a headset, especially one used in competitive play.

As for the microphone, Razer provides users with a so-so hypercardioid solution out of the box, but the enhancements made through Synapse improve its quality by a wide margin. Even just turning on the voice normalization enhancement makes a massive difference. The voice normalization feature is an easy way to brighten up your voice and should be the first thing you check out after purchasing this headset. Without the features provided in Synapse, the microphone doesn’t seem to match the headset’s output quality.

Check out the latest esports gear on Razer.com

While the price is indicative of a wireless headset brandishing the word “Pro” in its name, the sound quality out of the box will make the blow to your wallet hurt less. The Razer Blackshark V2 Pro Wireless is a formidable foe that undercuts the price of Logitech’s G Pro X Wireless headset.

The audible click of the purple switches is going to be polarizing. Luckily, the Blackshark V2 Pro Wireless’ tight seal took the edge off of the clickiness, allowing our reviewer to appreciate the muffled audio cue of the switch’s actuation. There was no second-guessing whether a keystroke had registered. Confidence in your tools should never be understated, and the Huntsman Mini’s purple switches deliver that sense of confidence match after match.

Added features on the Huntsman Mini include a detachable USB-C that terminates in a recessed port, an aluminum plate atop a plastic case, and two levels of adjustable feet. Our reviewer also appreciated the descriptive side-printed legends on the keycaps that allow the user to navigate media keys and RGB effects with ease.

The only real negative is the overly rattly stabilizers that can sometimes ruin the feel of the switches. These stabilizers are the only thing about the Huntsman Mini that feels like it might not provide a tight enough experience for esports professionals.

Finishing with the oldest product in the lineup, the Viper Ultimate wowed us back in 2019. While Razer has updated several of its other flagship mice with the lightweight treatment, the Viper has remained the most popular with esports professionals. We’d attribute this to the mouse’s true-ambidextrous shape that is both comfortable for and inclusive of a wide range of users.

Our reviewer had previously spent some time with the Viper Ultimate and almost named it Best Overall of 2019, but the price tag was too much to overlook. Those feelings have certainly been challenged throughout 2020 with strong, albeit pricey, releases from Logitech and other smaller companies. But the Viper Ultimate is still holding its own over a year after its release.

Being one of the first mice with a solid lightweight design, it’s not surprising that the Viper Ultimate isn’t the lightest mouse on the market. Weighing in at 74 grams, the Viper falls behind the Logitech G Pro X Superlight’s 62 grams. But Razer sacrificed nothing in terms of features. Buyers get 100 percent PTFE feet, a wicked fast sensor, left-handed support, and an awesome charging station for about the same price as the Superlight on its own.

Each mouse button feels tactile, but the rear side buttons feel a bit looser than the front. The same is true for both the left and right sides. Users may notice some minor creaking over time, but the experience overall has been responsive and light. Some creak here and there didn’t bother our reviewer too much, but it’s something that may dissuade prospective buyers. We put this creaking in the same category as the stabilizer rattle of the Huntsman Mini. It’s not a deal-breaker, but it’s probably not something the company would like advertised. Knowing Razer, the company is likely already acutely aware of this issue at this point.

After a lengthy testing period, we’ve come to understand a few things about Razer’s competitive ecosystem. Mainly, using the Huntsman Mini, Blackshark V2 Pro Wireless, and Viper Ultimate in tandem creates a unified ecosystem that feels competitive due to each product’s light and responsive design. All of these products have the same exact feel and share similar flaws—they belong together. The physical feel and design of these products create a sense of balance. This balance aids in each peripheral becoming an extension of you—total immersion and focus. The added sense of balance doesn’t mean you’ll be a professional by any means. In fact, it’ll be all the more jarring when you get slapped back to reality in a match of VALORANT. Shots land in your ear with weight, your flicks stay light and consistent, and your movement feels snappy.

Like our reviewer said in their roundup of Razer’s streaming lineup, there’s a certain level of added comfort and confidence when all of your equipment uses the same software. Even though Razer’s Synapse software isn’t always our favorite, it’s leagues better than some other software that accompanies gaming peripherals. Our reviewer doesn’t consider RGB to be a competitive component at all, but the fact that it’s all controlled from one application does help create a sense of unification.

One thing users will find in each of Razer’s esports lineup is noise. Razer excels in many areas, but its products tend to get a little noisy. The Huntsman Mini, Viper Ultimate, and Blackshark V2 Pro Wireless all share the same noisy affliction. The keyboard and headset get a bit rattly, and the mouse is a bit creaky after prolonged use. It’s not necessarily an indicator of shoddy work, but there’s still room for improvement. It is the most apparent flaw shared between these competitive options. The Huntsman Mini is definitely the worst offender here, but thankfully, the rattle isn’t very noticeable when using closed-back headphones.

Overall, Razer’s esports gear is at its best when used together, but that might not be possible for many gamers. While the prices of the Huntsman Mini, Viper Ultimate, and Blackshark V2 Pro Wireless are on par for the industry, each item still presents a large barrier to entry.

Looking at each product’s performance and value is the easiest to determine which product would suit your needs. The least expensive item of the bunch is the Huntsman Mini, but it might not be the best investment due to the overly noisy stabilizers. Sliding into the middle of the pack is the Viper Ultimate. Considering the flexibility of the Viper Ultimate’s ambidextrous design, this is a relatively safe bet for gamers who demand speed and functionality. The Blackshark V2 Pro Wireless is easily the most expensive and most impressive product in the lineup, but it may not provide the best value for consumers on a budget.

For gamers who are only in the market for one item, our reviewer recommends the Viper Ultimate. Razer’s lightweight champion is an easy recommendation because it offers the most value. The ambidextrous shape, fast sensor, and lightweight design go a long way in making the mouse feel like an extension of your body. The Viper Ultimate also has the advantage of being right in the middle of the price range, making its performance stick out more than the other items. While the Blackshark V2 Pro Wireless was our reviewer’s favorite item, the price point is steep and might be out of range for many gamers. The Viper Ultimate is still a pricey option, but it’s a fully-featured lightweight mouse that doesn’t make any compromises—a feature that’s in short supply.

Razer’s esports gear can provide a uniquely cohesive experience, but the bottom line is that the barrier to entry won’t be worth it for everyone. For those who are curious, the Viper Ultimate is a great first step into this ecosystem.