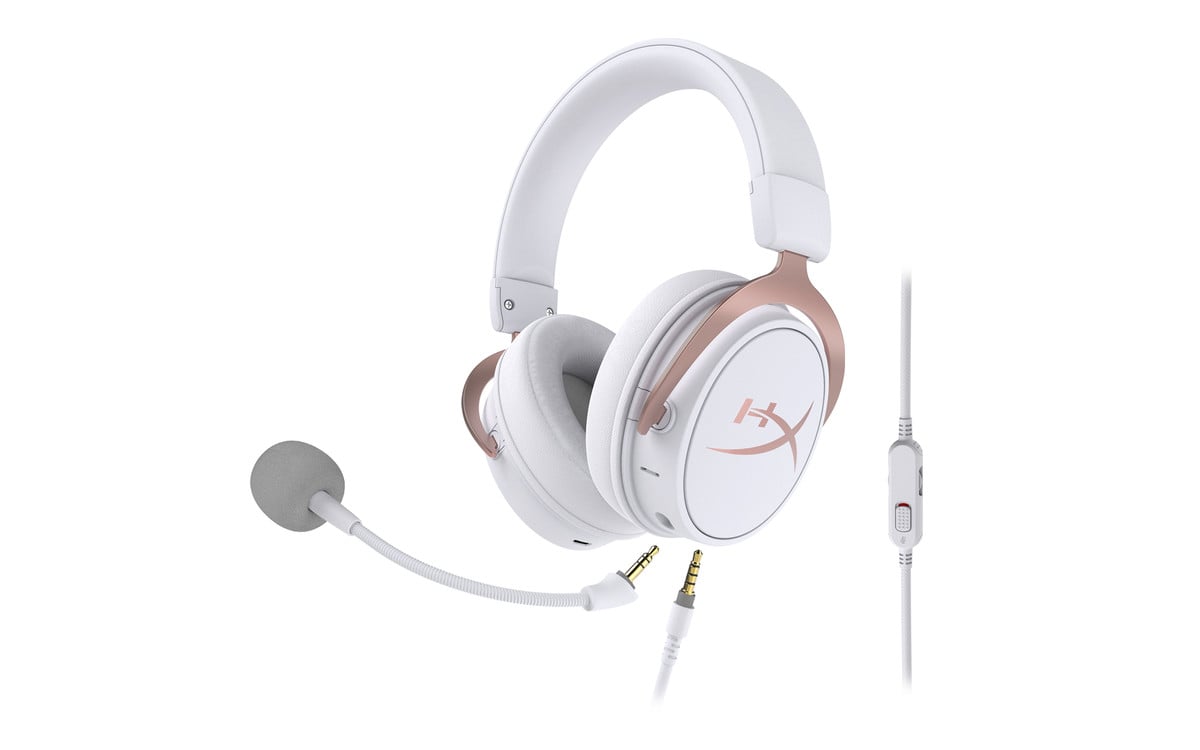 HyperX puts out solid headsets and there’s little point in arguing the opposite. The Cloud MIX is branded as HyperX’s lifestyle-ready offering, but that title seems to come at a premium.

Starting off with the basics, the look here is a rose gold and matte white finish. It’s a strong aesthetic that follows the same design language as most other HyperX products. HyperX products tend to forego the “gamery” aesthetic for something more subdued and minimalistic, albeit with a giant logo typically blasted somewhere on the product.

The Cloud MIX does a great job of presenting itself as a hybrid headset. Sure, it has the HyperX logo blasted on the sides, but at the same time, the rose gold and white don’t give off gamer vibes. Anyone who likes this aesthetic can easily go about their business without someone knowing that they’re wearing a gaming headset.

The inclusion of a detachable mic adds value here and an onboard mic for Bluetooth also helps to justify some of the cost.

The build quality is also solid, boasting an aluminum frame and some creature comforts that are expected at this price point. The Cloud MIX is an oddly light headset that doesn’t suffer for its featherweight construction, which lends itself to being a lifestyle headset.

The earcups have a nice leatherette type of material with some plush cushioning to boot. Users will find the same cushioning generously applied to the headband, which aids in preventing fatigue. The headset doesn’t sit heavier at any given point and, for the most part, goes unnoticed during heated gaming or zone-out music listening sessions.

The only thing users might find an issue with when it comes to fit is how strong of a seal the earcups form around the ears. While the tight seal definitely helps with passive noise isolation, it also traps heat and can cause some discomfort. To be clear, this isn’t necessarily a bad thing, but for users with oilier than average skin, you may want to give the fabric a wipe down more frequently for hygiene’s sake. It’s just one of those nitpick things that a select number of users will take issue with in the long run. Other headsets that provide ample passive noise isolation succeed without nearly as tight of a seal, so this is a minor drawback, in our opinion.

The 40mm dual-chamber drivers in the Cloud MIX do a great job of separating highs, mids, and lows. The mix here (no pun intended) is nice and warm right out of the box and translates well to a wide range of games. The direction of any given shot can be easily traced with the Cloud MIX and it was impressive to hear everything so clearly. But there’s a slight issue. That word “everything” becomes problematic in games where there’s a bit more going on in-game. Sometimes the soundstage feels cramped, which results in a bit of a mess in rare instances. Chaotic would be a good descriptor here.

The combination of the Cloud MIX being closed back and the tight seal of the ear cups doesn’t allow for as open of a soundstage as some other closed-back headphones and headsets. This may be user preference, but it’s noted here due to how badly it threw us off at times.

HyperX’s Cloud MIX can clearly handle itself in a competitive environment and it does a good job of handling its mellower pursuits as well. The Bluetooth capability is obviously one of the main draws here and it works easily with no hassle. It’s a bit of a bummer that users aren’t able to use the onboard volume controls when in wired mode. Being relegated to Bluetooth mode only is a missed opportunity, in our opinion. This isn’t a deal-breaker by any means since HyperX includes inline audio controls on the 3.5mm cable. Users will also want to detach the mic from the headset and use the built-in mic when in Bluetooth mode.

With Bluetooth, there’s a noticeable dive in quality. This can be expected when comparing wired and Bluetooth, but given how great the headset and mic sound is when wired, the difference here is quite stark. Music listening is nowhere near as enjoyable and trying to game with any Bluetooth device in general is a fool’s errand. There’s really no way to get around that loss in quality, but that’s where the price point comes into play. It isn’t that the Bluetooth is unacceptable, it just feels odd when switching from the solid quality of the wired connection.

At around $200, there’s a bit of a barrier to entry here and we’re not really sure why. Of course, the Cloud MIX is a great headset, but $200 seems a bit steep. It isn’t that the Cloud MIX isn’t a strong headset when wired, it’s just a question of whether it should come at that high of a cost considering the other options out on the market. The target audience here seems to be the “lifestyle” gamers and it just seems like a large number for a lifestyle product that doesn’t really appear to be able to commit to pleasing both sides of its audience.

The closed-back design and the tight seal may be a bit of a drawback for some users with sensitive or oily skin, but besides that, the audio comes through rich and warm. Things can get a bit chaotic in certain games but this could also come down to user preference at the end of the day.

The bottom line here is that if this headset is in your price range and you’re in the market for a hybrid lifestyle-ready headset, then you can’t really go wrong with the HyperX Cloud MIX. If you tend to lean toward gaming rather than on-the-go utility, then consider another one of HyperX’s solid offerings that might save you a few bucks.