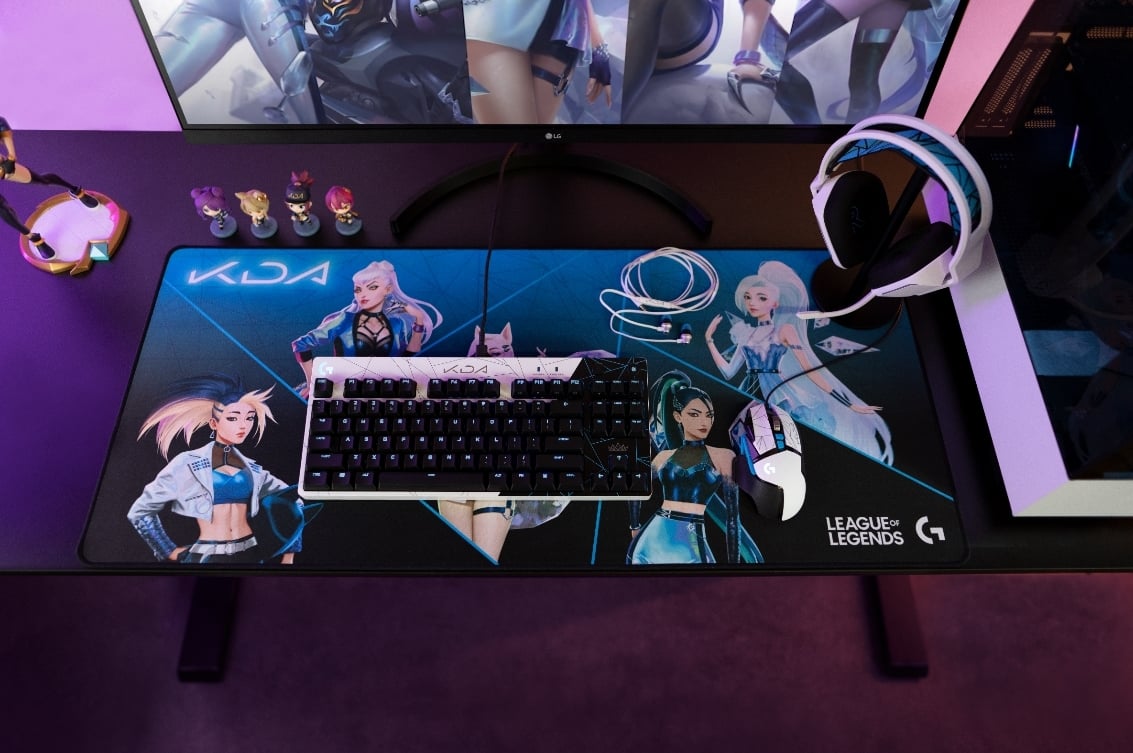 Logitech has been on an aesthetically-fueled tear this past year. Releasing its much-adored Color Collection in August 2020, Logitech found favor among gamers looking to add a little more of themselves to their setups. The company is continuing with its hyper-color showcase with the K/DA crossover collection.

K/DA is a K-pop-inspired group created by Riot Games. The group features four core members from League of Legends—Ahri, Akali, Evelynn, and Kai’Sa—as well as their newest collaborator, Seraphine. K/DA went viral with their first single, “POP/STARS,” in 2018 after it was released on YouTube, bringing non-League fans into the fold. The group has since released several singles that all have the same kinetic stopping power. If you’ve never listened, you should do that now. K/DA absolutely slaps, just like most of the designs in this Logitech collection.

This collection includes K/DA-inspired iterations of the G733 headset, G333 gaming earbuds, G305 wireless mouse, G840 XL mouse pad, Logitech G Pro keyboard, and the G502 mouse. If any of these sound familiar, it’s because they’re some of Logitech’s most popular products—and for good reason. The G733 and G305 are both staples in Logitech’s Color Collection, while the G502 and Pro TKL are some of Logitech’s most iconic products. The collection is rounded out by the G840 XL, a mammoth tribute to the members of K/DA and Seraphine.

Each item uses the same custom theme, but Logitech implemented the K/DA theme to emphasize each product’s design. Here’s a look at what you can expect from the Logitech x K/DA collection.

This surprise announcement is the crown jewel of the K/DA collection, in our reviewer’s opinion. Out of every product in the collaboration, the Pro TKL features the most thoughtful design by a long shot. This design even mitigates one of the Pro TKL’s larger flaws.

The Pro TKL suffers from a large amount of unused space. The larger-than-average forehead of this keyboard stood out to our reviewer when they first tested the keyboard in 2019. The K/DA edition of the Pro fixes the original’s issue by filling the dead space with a raised metallic K/DA logo. It’s a small change, but it makes a huge difference when paired with the two-tone geometric pattern.

If you’re into Pro keyboards already and don’t mind the semi-rattly spacebar, then this one is worth your time. Turning the RGB lighting to blue also creates a cohesive feel with the other peripherals in the collection.

Logitech’s G305 isn’t too flashy under the hood. This mouse features the HERO 12K sensor, which is a few steps down from the G502’s 25K sensor. Instead of running off a rechargeable battery, it’s powered by a single AA battery and has a lifespan of about 250 hours.

It may not be the cream of the crop, but the G305 has a killer design that will blend in well, even if you’re not into K/DA or League.

One of Logitech’s best-selling mice to date, the G502 is another surprise addition to the K/DA collection. The G502 wasn’t a part of the original announcement in October 2020 and is an interesting addition for a few reasons.

Logitech’s G502 has an aggressive design by default, so adding any kind of color to it compounds its intensity. The K/DA iteration of the G502 is one of the loudest-looking gaming mice our reviewer has ever seen. This may not be a bad thing if you’re the right person, but the blue buttons on top of the segmented black and white body were a bit much for our reviewer.

Design aside, users get the wide G502 feature set we know and love. The HERO 25K sensor keeps up in any scenario and the sheer amount of customization options adds value to what is already one of the more flexible gaming mice around. Users can also tinker with the mouse’s weight for added control, though it’s already a hefty 121 grams.

Another staple in Logitech’s Colors Collection, the G733 is one of the less striking elements of the collaboration. There’s nothing wrong with the design, but it doesn’t feel like the company did much to the standard white G733. Sure, there’s the K/DA branding on the ear cups and headband, but overall, the headset doesn’t leave a lasting impression.

Performance-wise, buyers are going to get the same sound quality they would with a standard G733. The headset’s PRO-G 40-millimeter drivers provide decent sound but can feel a bit crowded at times. There’s also a detachable cardioid microphone that is Blue Voice compatible, which dramatically improves the mic’s quality. You’ll get about 20 to 29 hours of battery life out of these depending on if you use the RGB lighting.

The K/DA G733 may look lackluster, but if you’re going for the whole collection and have the budget, this should take precedence over the G333 earbuds.

The G333 earbuds might look familiar to you if you’re a VR fan. These are based on the G333 VR earbuds that were previously only available for the Oculus Quest 2.

These earbuds sound great, but there’s little that distinguishes them from the standard G333 VR earbuds. The blue ear tips and white cable are nearly identical to the preexisting colorway and the only defining design feature is the K/DA branding on the inline controls. It feels more like a recycled design than a limited-edition release.

Design aside, these earbuds have solid imaging that allows you to track enemies with ease. They don’t look like anything special, but the sound is surprisingly solid for being one of the cheaper products in the set. If you can’t afford the K/DA G733 headset and aren’t averse to in-ear audio solutions, the G333s will suit you well.

This might be the most polarizing item in the lineup. Logitech’s massive G840 XL mouse pad already makes a visual dent since it takes up the better part of a desk, but the K/DA model will pull focus in any room.

Each core member of K/DA and Seraphine is prominently displayed on the mouse pad. The bright blue to black gradient and large K/DA logo, along with the League and Logitech logos, make the mouse pad feel cramped. It feels like there are too many brands vying for attention on the mouse pad. The one major flaw with this design is that you’ll pretty much always be covering Ahri’s face.

This one is for the die-hard K/DA fans out there.

For those who can’t afford the full collection, our reviewer recommends picking up the Pro TKL keyboard, G305 mouse, and G333 earbuds. The Pro keyboard is the priciest item in the collection but is well worth the premium considering its thoughtful design and overall great quality.