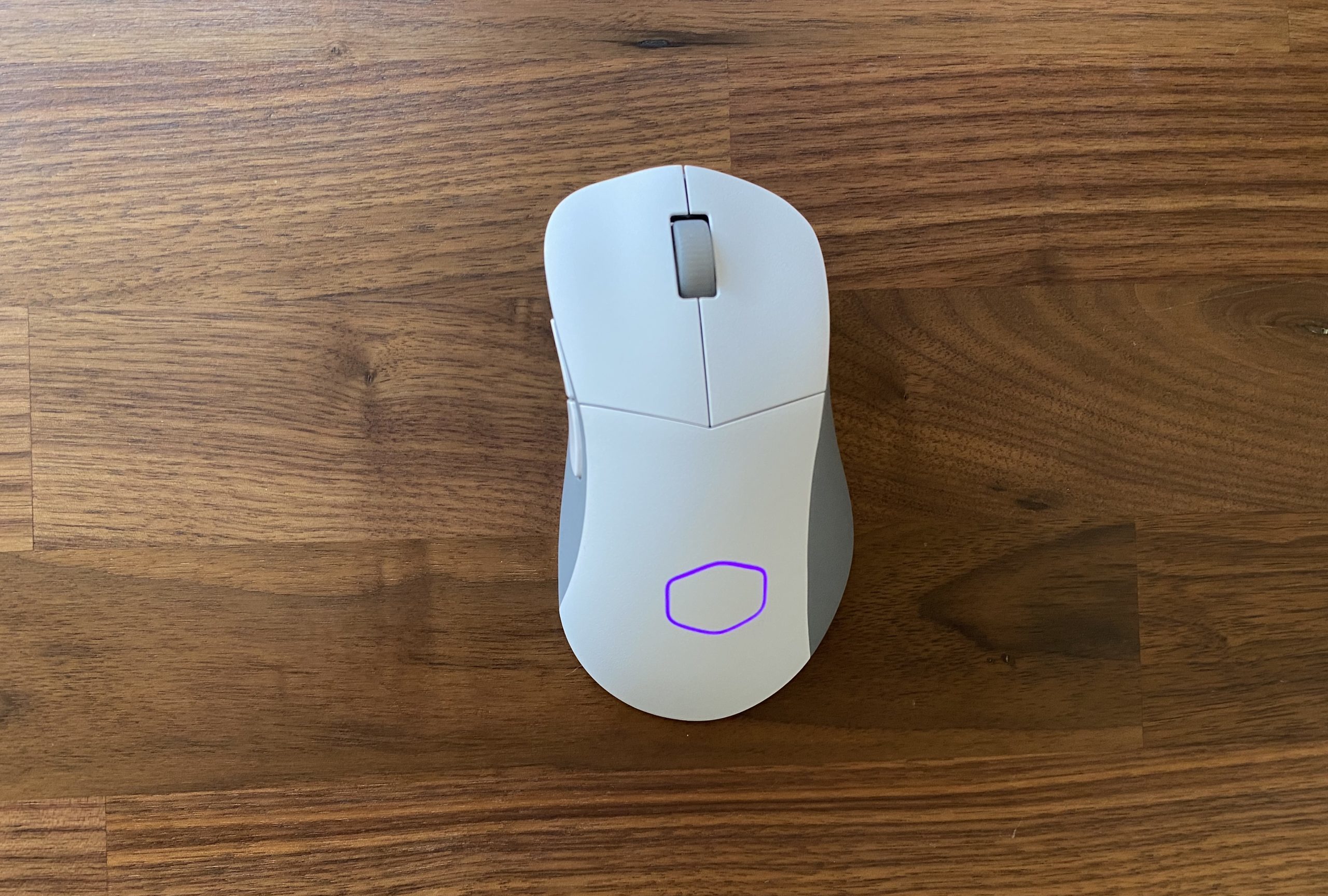 Cooler Master has its hands in nearly every PC hardware pie imaginable, from gaming mice and keyboards to CPU coolers and GPU support brackets. One of its most surprising runaway successes of the past couple of years is its Mini-ITX MasterBox NR200 case. But with being spread so thin, it’s almost impossible to reach the same level of greatness in every field. This much is evident with Cooler Master’s newest wireless mouse, the MM731.

Although it boasts a comfortable shape and grippy texture, there’s not much that impresses about the MM731, especially considering the asking price.

The MM731 is a 59-gram right-handed ergonomic mouse with a minimalist design that only screams gamer with the lights on. It’s plain and somewhat reminiscent of Logitech’s G603 mouse. The mouse’s unassuming design is one of the better choices the company made.

Along with its subdued looks, the MM731 is backed by dual Bluetooth and 2.4GHz wireless connections. Having these two connection types allows the MM731 to travel well between desks. While it’s not typically advisable to competitively game on Bluetooth, the connection is viable for everyday tasks. Using Bluetooth without the lights on nets users about 190 hours out of the 500mAh battery, while using a 2.4GHz connection ensures 72 hours without the LEDs.

Cooler Master does not specify which specific sensor accompanies the MM731, but it lists the sensor as a PixArt Optical Sensor. PixArt is a standard in gaming mice, but the quality can vary from model to model, with many companies modifying the sensor to create a proprietary remix. This particular model caps DPI at 19,000, has a tracking speed of 400 IPS, and a polling rate of 1,000Hz. The sensor sits toward the front of the mouse, which is relatively uncommon in mainstream gaming mice but preferred by many players.

In addition to what is seemingly a standard sensor, the MM731 features optical switches backing its six-button layout. This type of switch is increasingly popular in mainstream mouse manufacturers, with Razer being one of the most notable. Optical switches can eliminate debounce delay to provide an immediate actuation and response.

Rounding out the MM731’s design is the standard proprietary USB-C paracord cable and PTFE mouse feet. Cooler Master calls its take on the famed paracord cable the Ultraweave Cable. While both are expected at this price point, either of their absences would be detrimental to the overall experience, especially considering what this specific experience brings.

Nailing the lightweight gaming mouse formula seems like an easy feat these days, with every company coming out with a lightweight answer. Cooler Master already has a successful lightweight release under its belt, but the MM731 doesn’t make the cut, with one of its most glaring flaws being build quality.

Ample flex in the bottom of the mouse, creaking while gaming, and one other major issue make the MM731 untrustworthy right off the bat. There’s no getting around being distracted by the sound and feel of a poorly constructed mouse in the middle of a match. A gaming mouse should be an extension of the player, not an imposition. It isn’t just the noise that takes away from MM731’s performance, either.

The build quality issues don’t stop with rogue sounds and meander into the mouse’s side buttons. Side buttons have an issue with getting caught on the mouse itself, producing a nasty, tactile crunch. It almost feels like it’s a two-step actuation feature but is far from purposeful or pleasant.

During the first testing period, the mouse one and two buttons felt stable from the outset but the triggers creaked and swayed during flick shots and other quick movements. Our reviewer was unable to recreate this issue in a later test.

Plugging the MM731 in and jumping in a game was mildly uncomfortable. While it didn’t feel like anything was inherently wrong at first, there was slightly more discomfort. It’s probable that the forward positioning of the sensor added to the learning curve, but the experience got more dicey for other reasons down the road.

The mouse seemed to skip and lag behind with noticeable delay at times. This issue wasn’t present throughout testing, but it would randomly pop up and tank an objective push or flank. Even in doing the most menial of tasks, the MM731 would randomly decide it didn’t want to play. Using a wired connection for entire days didn’t yield the same result, which seemingly rules out the sensor itself being an issue. It was more of a random drop in connection every now and then.

There are plenty of players who enjoy the forward positioning of the sensor and many who won’t notice. Fans of the old Logitech G500s or more recent Corsair Sabre RGB Champion Series might be right at home with the MM731 aside from its other issues. Having tested the Sabre RGB Champion Series, there is a definite difference in comfort, though this is likely pure preference.

Aside from the sensor placement potentially adding to the learning curve, the MM731 feels comfortable in both claw and palm grips. In a somewhat rare occurrence, palm felt a slightly better than claw grip this time around. Both are comfortable, but palm grip wins out thanks to the flatter flare out on the back right of the mouse. Fingertip grip users are out of luck here unless they’re particularly taken with the MM371.

The texture of the MM731 also encourages a more reliable grip. Similar to SteelSeries’ Prime line of gaming mice, the MM731 features a textured matte coating. This type of coating helps manage sweaty palms and aids in keeping players comfortable for longer periods.

(Not quite) saving graces

Overall, the MM731 doesn’t have much going for it, and what it does have going for it is largely expected at $90 and well beneath, with Razer’s $60 Basilisk X HyperSpeed coming to mind. Feeling the 59-gram MM731 glide is really something. It feels light on its feet, even with the Ultraweave Cable attached. The Ultraweave Cable falls between Corsair’s hyper-flexible paracord cable and SteelSeries’ slightly thicker, less pliable Super Mesh cable. But these are minor wins in an otherwise unreliable package.

Considering the $90 price tag, Cooler Master’s MM731 doesn’t earn much good faith in its value or performance. While it is loaded with dual connectivity and all the modern bells and whistles that are now standard offerings, the questionable build quality combined with odd connection drops throws a wrench into what is otherwise a standard-looking gaming mouse.

Update on Oct. 22, 2021 at 5:43pm CT: This article has been updated after our reviewer was unable during the second test to recreate the mouse one and two button issues from the initial test.