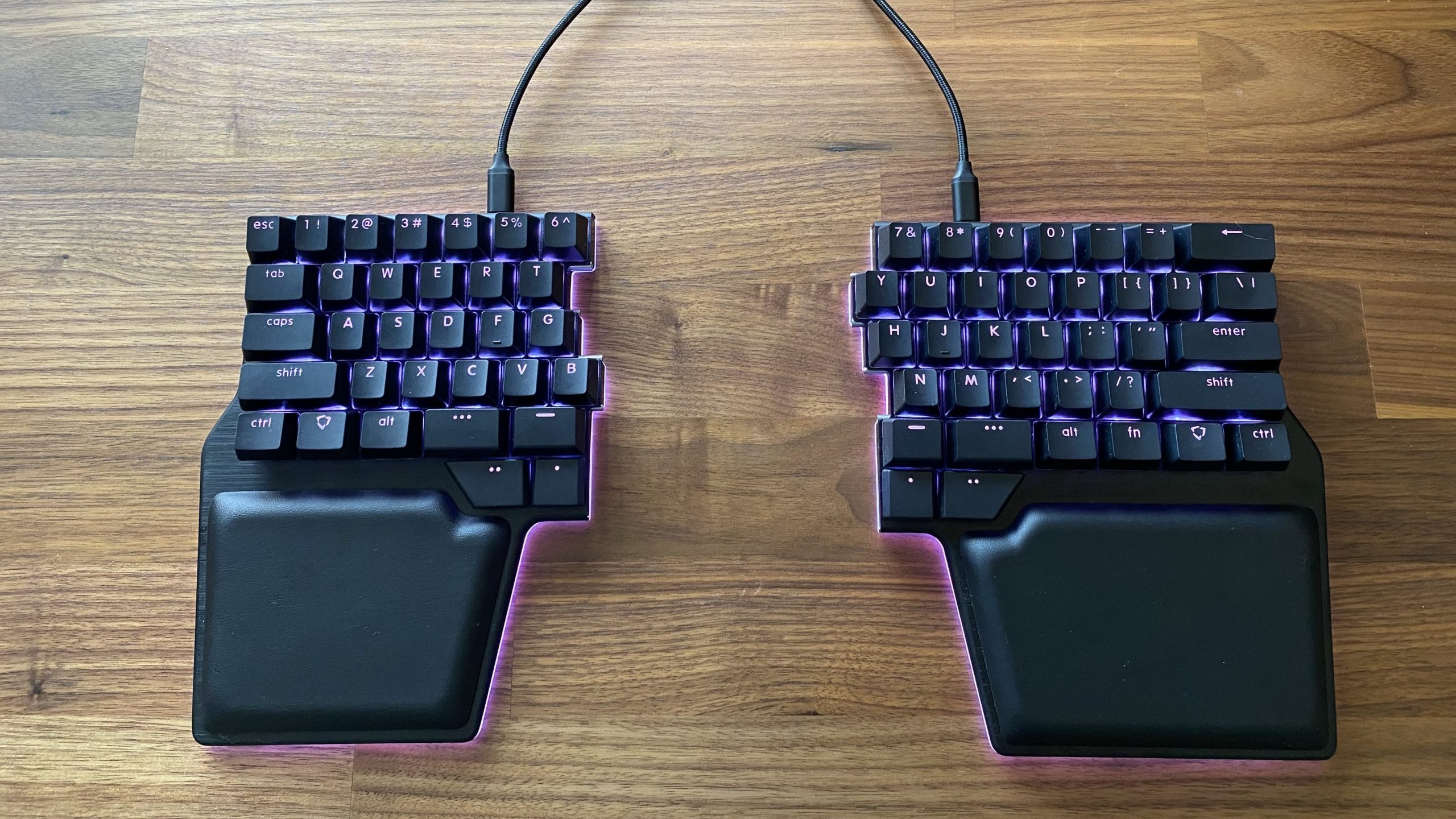 Founded in 2016 by former Fnatic LEC coach Luis “Deilor” Sevilla, Dygma aims to create the most advanced keyboards with the best ergonomics to promote player health and comfort. This focus on ergonomics puts the company’s flagship keyboard in a different bracket than most gaming keyboard companies.

Gaming keyboards all follow similar designs, making for an “if it ain’t broke, don’t fix it” market that rarely offers much in the way of meaningful innovation. This tried-and-true formula isn’t inherently bad, but in offering something that can please the masses, the finer details regarding player health and comfort can slide by the wayside in favor of a more interesting-looking case or more compact package. Ergonomic keyboards typically try to remedy this issue, but their designs can be difficult to get used to typing with while others resemble the typewriters of old.

Looking at Dygma’s Raise keyboard, the goal seems to be to bridge the gap between modern gaming keyboards and ergonomics to create something fresh. Taking the comfort and health benefits of a split keyboard design along with the responsiveness of a gaming keyboard, Dygma hopes to check all the boxes for gamers but hit an undeniable pitfall in the process.

Dygma’s flagship keyboard is an ergonomic with an optional split, meaning that you can use it in a 60 percent form or in a split configuration. There are plenty of keyboards out there with this split configuration, but few offer an optional approach. In making the split fully optional, Dygma makes it slightly easier for your hands and muscles to adjust. But the Raise offers a bit more than most keyboards, ergonomic or otherwise. 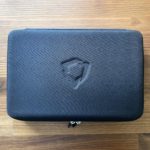 The Raise does its best to impress straightaway with doubleshot PBT keycaps, carrying case, tools, and accessories. The included case feels sturdy and is similar to the one that ships with Kinesis Gaming’s TKO keyboard. Inside the case, there’s a magnetic compartment for the necessary USB-C cables and a few smaller accessories like a switch puller. The switch and keycap puller combo tool comes in the Raise Enhancement kit. The kit also features O-rings, a switch tester, two extra keycaps, and a couple of cleaning cloths. 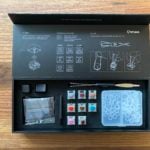 To connect the Raise, Dygma provides four USB-C cables, but three will do. The choice to include USB-C connections tracks with the theme of comfort since having to connect three cables seems a little extra for those who aren’t used to non-traditional keyboards. Being USB-C, the cables are easy to connect at odd angles should you have a more restricted setup.

One of the most important features of a keyboard is its switches and having a hot-swappable PCB allows users to experiment to find the best switch for them. It isn’t a unique feature by any means, but for an ergonomic split keyboard, it’s a solid addition that makes sense given the intended purpose of a keyboard like the Raise. Dygma offers the choice between Kailh Speed Silvers, Kailh Speed Coppers, Kailh Speed Bronze, Cherry MX Red, Cherry MX Brown, Cherry MX Blue, Kailh Silent Pink, and Kailh Silent Brown.

Something that is normally a concern on other keyboards is the fixed typing angle. Running a fixed typing angle is always a gamble, and the lack of flip-up feet here still ding the overall value since any adjustment is locked behind the add-on tenting kit; however, the Raise gets by very well without the extra adjustment. Still, the lack of adjustability—ergonomically minded or not—dents the value of this expensive keyboard.

Let’s just address it up top, the Raise isn’t the prettiest keyboard in town, but that’s actually one of the best things it has going for it. Because this design does its best to work within the confines of being an inherently funky-looking split ergonomic keyboard, it’s actually mildly charming once you get to typing and experience the benefits of the split functionality.

Split keyboards are a larger step away from normal than most keyboards that have come across the review desk, but indulging the Raise’s half-gamer, half-ergo look gives way to an experience that has a great deal of substance. 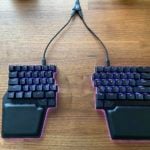 The design feels thoughtful and leaves itself open for creative desk configurations. Need more room for flick shots and sweeping mouse movements? Just unplug the half of the keyboard that’s blocking up your mouse. Out of deskpad with the keyboard split too far apart? Toss the mouse in the middle of the split. There are so many ways to use a split keyboard, giving options like the Raise a style that informs its substance.

While you could likely get a similar experience with something like the Kinesis Freestyle Edge RGB, the Raise has other aspects of its design to make it more welcoming.

Split slowly or all at once

One factor that helps boost the appeal of the Raise is its optional split. This might not sound exciting—and it isn’t—but the Raise allowing users to use the keyboard in 60 percent mode, along with gradually moving the keyboard apart is crucial in ensuring beginners are comfortable.

It’s not that you simply put the two halves of the keyboard close together like the Freestyle Edge RGB; instead, you can lock the Raise into its 60 percent form as if it was intended to be a traditional board. This makes it easy to start in 60 percent and then split the keyboard little by little to help mitigate the inherently steep learning curve. If you’re a touch typist, you might have a bit of a leg up. But you may need to adjust which finger you use to reach the Y and B keys.

A utility belt of function possibilities 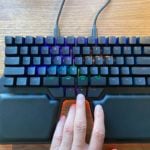 Another huge selling point that doesn’t make itself known until you really start messing around in the Bazecor software is the Raise’s impressive functionality. Most 60 percent boards feel like you’re sacrificing functionality in the name of desk space, even when you’re able to program arrow keys like on the Ducky One 2 Mini. The opposite is true for the Raise.

Using the thumb cluster, users can get an impressive amount of use out of the Raise. Programming the thumb cluster to trigger layers via tapping or holding the keys gives easy access to whatever function you need. This includes macros, media keys, a numpad, arrow keys, and other more complex functions better suited for power users and programmers. The thumb cluster just makes everything feel much more accessible and eases the pain of losing dedicated keys.

In trying to create the most comfortable experience possible, cutting Ctrl and assigning it to one of the thumb cluster keys seemed to be the right move. No more awkwardly reaching down with a pinky to hit control, just a casual tap on a thumb cluster key to get the job done. It’s only a matter of light retraining in that case. Your learning curve will vary depending on how complex you want assignments and layers to get.

Pairing the functional layers with the highly-customizable RGB zones creates a sense of purpose behind the inclusion of RGB. Having control over the layers of lighting and which zones are lit makes it easy to identify what layer you’re in. It’s a simple but crucial detail in defining the Raise’s functionality and justification of RGB.

Is the Dygma Raise for you?

The Dygma Raise is an interesting, albeit expensive keyboard that is ready for quite literally anything you can throw at it. But it’s certainly not for everyone given the $319 price tag.

Raise’s gaming-grade performance, impressive functionality, and high degree of comfort make it more than worth it for professionals and gamers who are at their desks for six or so hours a day. After using the Raise as a daily driver for work and gaming, the posture and the general comfort benefits of the wrist rest, split design, and typing angle provide the most comfortable typing and gaming experience in recent memory.

If you’re intrigued by the idea of a more comfortable experience for hours of gaming or work but have shied away from other ergonomic options in the past, the Raise provides an easier learner curve thanks to the optional split. If this doesn’t sound like you, then you’ll definitely want to pass on this do-it-all ergonomic option and its hefty price tag.