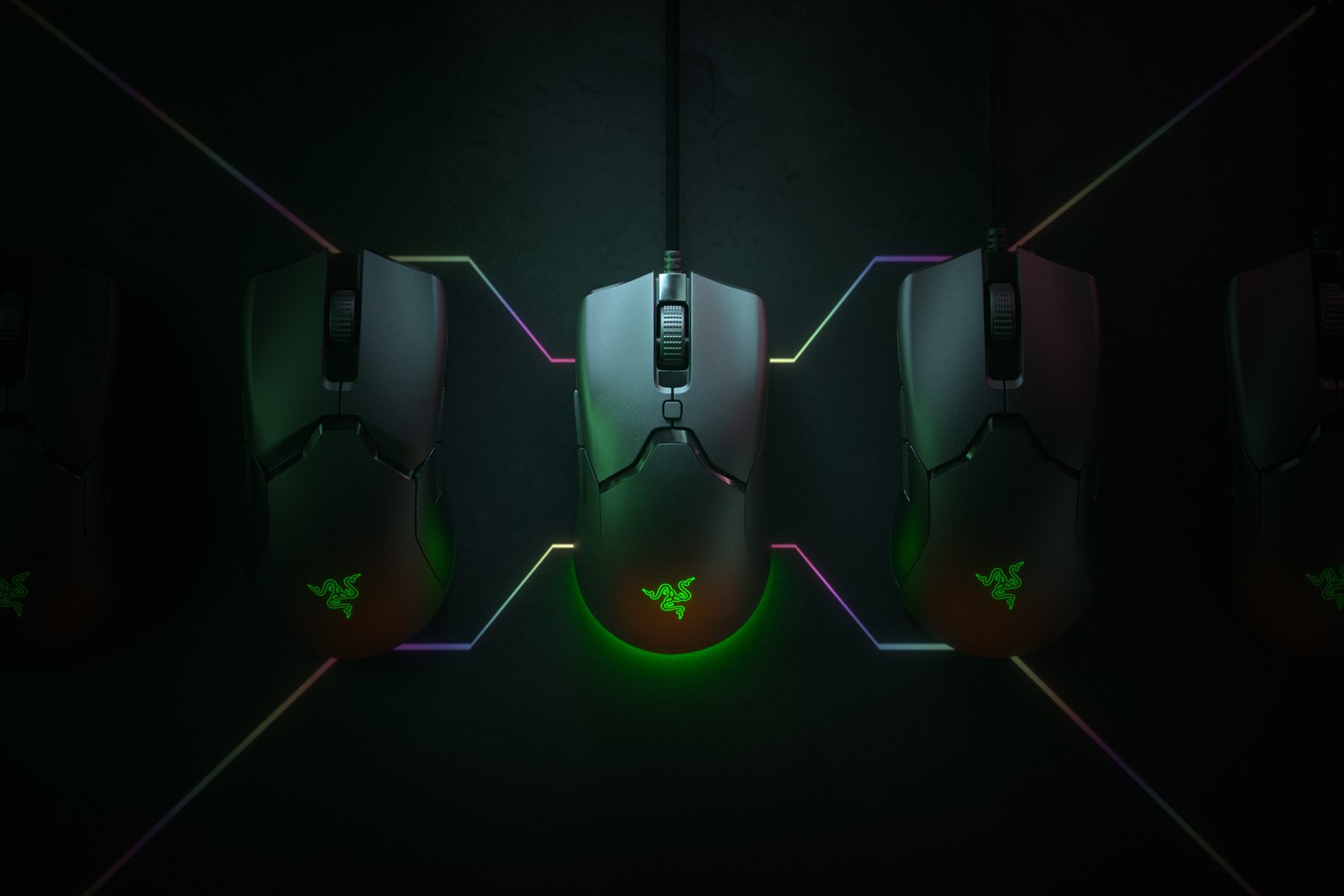 Ultralight gaming mice took off after the Finalmouse Air58 Ninja launched in 2018, and most manufacturers now have ultralight mice in their lineups. These lightweight mice are easier and faster to maneuver, making them ideal for fast-paced competitive games where players need any edge they can find.

One of the most common ways companies reduce the weight of their mice is by using a honeycomb design. The cutouts lower the amount of material used, bringing down the mouse’s weight considerably. Other common weight reduction methods include making the mouse smaller and cutting out certain functions like RGB lighting.

While ultralight mice are fast, some are small and force users to adjust their grip to suit the new shape. Buyers looking for an ultralight option should note the mouse’s size to ensure it’s a good fit before making a purchase.

These are the lightest mice for gaming in order of heaviest to lightest.

Razer is known for its high-quality gaming products, but most of them are pricey. The Viper Mini bucks the trend by giving users the same quality in a compact and lightweight product.

The Viper Mini is the only mouse on this list without a perforated design. Instead, it follows Razer’s matte black design language with green accents. Despite its solid shell, the Viper Mini still weighs in at only 61 grams. It might be heavier than the alternatives on this list, but it’s still lighter than most gaming mice out there. When it comes to size, the Viper Mini is almost the same as the M42, measuring 118 by 62 by 38 millimeters (LxWxH).

One way Razer keeps the Viper Mini price down is by using a lesser sensor compared to the other mice listed here. While the Model O- and Pulsefire Haste go up to 12,000 and 16,000 DPI, respectively, the Mini Viper only goes up to 8,000 DPI. Apart from the sensor, the other components of the Viper Mini, like the optical switches and Speedflex cable, are the same as the regular Viper.

While the Viper Mini isn’t perfect, it has a lot going for it. It’s lightweight and has responsive switches. This mouse’s DPI might not be the highest, but most players don’t go above 8,000 DPI. The Viper Mini’s drawbacks are hard to fault when considering its affordable price tag and impressive value.

HyperX’s Pulsefire Haste resembles Xtrfy’s M42 in many ways. Both mice have a similar all-black design with perforations on the body and buttons. They also have a symmetrical shape with side buttons on the left side only. One difference is the Pulsefire Haste ships with grip tape users can stick to the buttons to add more friction.

Size-wise, the Pulsefire Haste has similar dimensions to the other mice on this list. At 124 by 67 by 38 millimeters, it’s longer and wider than the M42, but its weight is the same at 59 grams.

While the Pulsefire Haste is more affordable than the mice listed so far, it has comparable performance. HyperX uses a Pixart 3335 sensor capable of up to 16,000 DPI. The TTC Gold Series switches used in this mouse are durable and have an estimated lifespan of around 60 million clicks.

HyperX’s Pulsefire Haste is a no-frills mouse designed for speed. It doesn’t have any advanced features, but it’s lightweight and packs a decent feature set for a reasonable price.

Xtrfy’s M42 is another lightweight mouse with a perforated design. Instead of the honeycomb pattern found on the other mice on this list, it has circular holes on the top, bottom, and sides to save weight. Like the Model O-, it has RGB lighting strips on either side to add some color to the all-black design.

There’s a minimal weight difference between the M42 and the Model O-. The M42 is only one gram heavier than the Model O- with a weight of 59 grams. Where it stands out is the addition of a modular shell. Two shells come in the box, with one having a more pronounced hump and the other with a more slanted profile. They are easy to install and remove and also add value by allowing the user to reshape the mouse and change grip styles on a whim.

Another area where the M42 differs from the other mice on this list is the location of its buttons. Most of the buttons are in their expected positions, including the left and right-click, the scroll wheel, and side buttons. Where the M42 differs is having the DPI adjustment buttons located underneath the mouse and having the RGB button behind the scroll wheel. This means that players can only adjust the DPI by turning the mouse upside down. If they want to switch between the various lighting settings, players must use the button behind the scroll wheel.

One of the main complaints about lightweight mice is that they don’t fit everyones’ hands. The M42 fixes this issue by having a modular design, allowing users to adjust the shape to suit their needs. Xtrfy’s M42 maintains lightweight status with decent performance, but the lack of software might turn off some users.

The Glorious Model O- isn’t as light as the MM720, but it excels in other areas, like customization. Compared to the MM720, the Model O- longer and narrower, measuring 120 by 63 by 36 millimeters. Despite being heavier than the MM720, Glorious’ mouse still weighs a respectable 58 grams, which is exceptionally light by gaming mouse standards.

Glorious’ original Model O was one of the early adopters of the honeycomb design but kept other elements of the mouse fairly standard. The company brought this perforated pattern to the Model O- to keep its weight down. Apart from the honeycomb design, the O- has a symmetrical shape with side buttons on the right side. It also has the standard left and right-click buttons sitting on either side of the scroll wheel. Users can adjust the DPI with a button behind the scroll wheel instead of using software like the MM720. At 120 by 63 by 36 millimeters, it is longer and more narrow than the MM720.

Customization is one of the strongpoints of the Model O-. Users can choose between black or white in matte or glossy plastic. There are extended paracord cables available in colors like green, purple, and red. Glorious also sells extra feet and a mouse bungee for the Model O-.

While the Model O- sensor only goes up to 12,000 DPI, it’s still more than enough for most users. Considering its reasonable price, the Model O- has more than acceptable performance, making it a strong contender in the ultralight gaming mouse market.

Cooler Master’s MM720 is a featherweight mouse with an ergonomic shape. Like most mice on this list, it uses a honeycomb pattern to reduce its mass, but it’s lighter at 49 grams.

The ergonomic shape of the MM720 is aimed at right-handed users only. Instead of a symmetrical shape like the other mice on this list, the MM720 has a pronounced finger rest on the right side, leaving left-handed players out of luck. One of the best design elements of this mouse is its large surface area, which makes it more comfortable for users with bigger hands. The MM720 measures 105 by 78 by 37 millimeters, giving it enough width for larger hands to get a comfortable grip.

For a lightweight mouse, the MM720 has solid performance that makes few compromises. It uses the popular 16,000 DPI Pixart PMW 3389 optical sensor found in other mice on this list, like the M42. The MM720 also uses durable LK optical switches with an expected lifespan of 70 million clicks.

The only area where the MM720 lags behind the other mice on this list is the lack of adjustment buttons. Omitting a DPI button was probably done to save weight, forcing users to change the DPI using software only.

For a perforated mouse, the MM720 has impressive durability. Its internals are coated with a protective layer, giving it an IP58 rating. The IP58 rating means the mouse is protected from limited amounts of dust and light water spray. While the MM720 has some protection from the elements, it’s inadvisable to put it to the test.