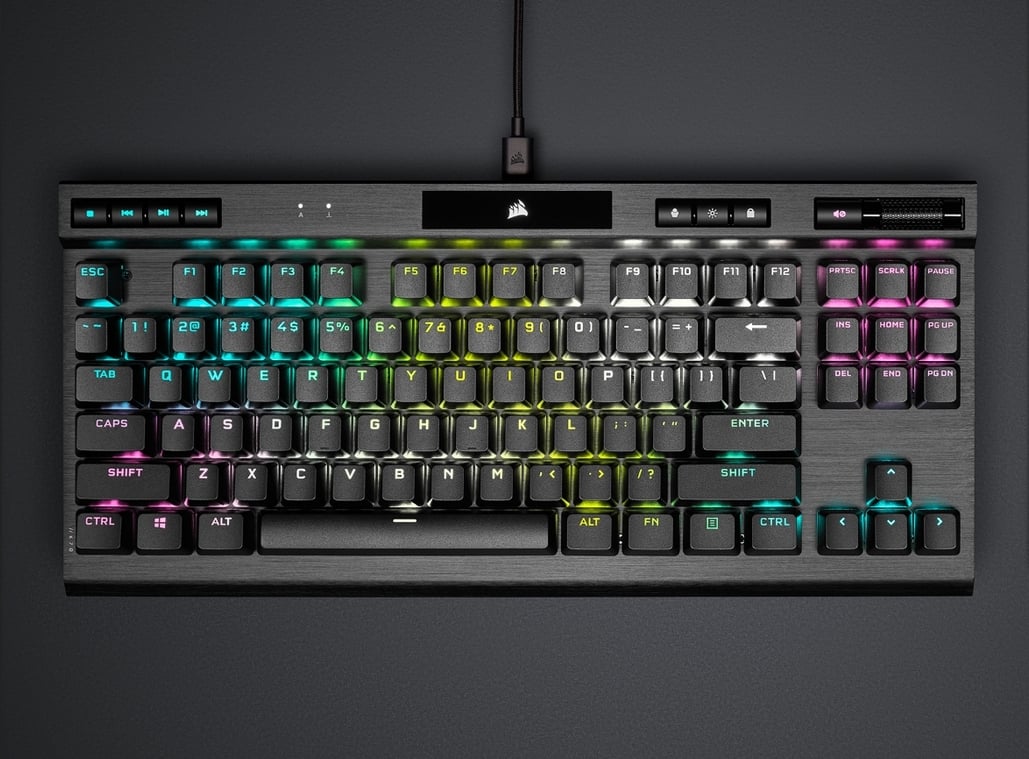 After the Razer 8KHz hit the market, many reviewers questioned whether keyboards would soon follow suit. Corsair was quick on the ball, adopting the 8,000 Hz polling rate with its AXON hyper-polling tech included on the K65 Mini. These 8,000 Hz gaming peripherals report to your PC eight times faster than current industry-standard mice, offering the fastest gaming experience possible. While the advantages of a faster polling rate are impressive on paper, the real-world benefits are hard to notice—and this goes double for Corsair’s newest esports-focused keyboard.

Corsair keyboards have come a long way in terms of overall quality. It wasn’t long ago the company used a pesky non-standard bottom row layout and ABS keycaps. Those days are over thanks to some modern updates, like PBT keycaps and a standard bottom row. Corsair also includes a few other quality-of-life features that stand out immediately.

A big win for the K70 Champion Series is its volume roller, a rarity for TKL keyboards. The ability to adjust volume without heading into the settings or tabbing out of a game is always appreciated. SteelSeries and ROCCAT also include similar volume adjustments on their respective keyboards. It’s promising to see another well-known company adopt this feature.

The stabilizers on the K70 Champion Series feel slightly better than past iterations. There’s still plenty of play and rattle to the stabilizer, but they’re nowhere near as rough as HyperX’s Alloy Origins 60 stabilizers.

Don’t I know you from somewhere?

Despite the quality-of-life updates, the K70 Champion Series follows its predecessors’ designs in most ways. From the familiar aluminum and plastic construction to the angular design, there’s no mistaking this for any other brand’s product.

Those familiar with Corsair keyboards will recognize the aluminum top plate and plastic case. This combo is popular among mainstream peripheral companies but can sometimes lead to a metallic pinging. Users will find this design flaw in every keyboard. Metallic pinging gets worse depending on the form factor and hollowness of the case. Being a tenkeyless keyboard, the K70 Champion Series doesn’t suffer too terribly from this issue. Tapping your fingernail on your keyboard’s aluminum plate will give you a good idea of the maximum level of noise you’ll hear.

The one feature our reviewer wishes didn’t return is the single-layer adjustable feet. Corsair isn’t the only company guilty of skimping out on adjustability. ROCCAT cut the same corner and it’s an easy omission to note on keyboards that hit above $100.

Other returning features include dedicated media keys, brightness control, and a Windows Lock key. All of these features are welcome returns that help offset misplays like single-layer adjustable feet.

The K70 Champion Series hosts a few esports-centric features, including a detachable USB-C cable and a tournament mode switch. Detachable cables have become increasingly popular as peripheral manufacturers double down on supporting esports. The inclusion of a tournament mode switch is also handy but is somewhat pointless outside of its intended audience.

Having the option to toggle tournament mode on and off with the flick of a switch is great, but it may be lost on gamers who don’t see themselves competing anytime soon. There’s no reason to use tournament mode outside of its intended use since it blocks out much of what you’re paying for with a keyboard like the K70 Champion Series.

Is this really necessary?

Corsair’s K70 Champion Series hits an interesting roadblock when it comes to performance. While the prospects of an 8,000 Hz gaming mouse are exciting, the potential benefits of Corsair AXON hyper-polling get lost in translation between mouse and keyboard.

Along with the faster polling rate comes the need for a modern CPU. Because 8,000 Hz peripherals send more reports per second to your PC, your CPU has to process more information than with a 1,000 Hz peripheral. Our reviewer used an Intel i7-9700K to review this keyboard and saw CPU usage spike slightly higher than usual. CPU usage will vary from system to system, but it’s something to note if you haven’t upgraded your CPU in a while.

The ever-so-slight benefits of an 8,000 Hz gaming mouse are hard to pin down when carried over to a keyboard. Both a mouse and keyboard play crucial roles in how you perform but not in equal measures as far as 8,000 Hz polling is concerned. Because of how you use your mouse, it makes sense to want every swipe, turn, and flick to register as fast as possible. Slight performance differences seen in gaming mice don’t translate to a keyboard because a keystroke is a keystroke to an extent. Conversely, a mouse flick needs to be tracked accurately and consistently to ensure precision movement the whole way through. An 8,000 Hz keyboard feels like overkill, especially considering the switches Corsair put in the K70 Champion Series.

Corsair’s decision to use Cherry MX Speed Silvers in the K70 Champion Series sticks out in an unflattering way. While there are many die-hard mechanical switch enthusiasts, there’s no denying the immediacy of optical switches.

The decision to use mechanical switches is puzzling since Corsair has its proprietary OPX optical switches. Given that 8,000 Hz polling rates are all about speed and information accuracy, it doesn’t track for Corsair to omit its OPX switches since they undercut the actuation point of Cherry MX Speed Silver by 0.2 millimeters. The difference in actuation seems negligible, but we come to a troubling conclusion if we run with that logic. There’s no point in an 8,000 Hz keyboard since the difference between the Corsair K70 Series with 8,000 Hz enabled and 1,000 Hz enabled is negligible.

Despite this odd pitfall, Cherry MX Speed Silvers still feel fast and light. Still, Corsair’s decision to run these instead of its in-house OPX switches is strange considering the purpose of 8,000 Hz hyper-polling.

Our reviewer’s experience with Corsair’s iCUE software was a mixed bag, as it is with most software. At first, iCUE didn’t recognize the K70 Champion Series but picked up the Sabre Pro mouse straight away. After several uninstalls and reinstalls, iCUE finally registered the keyboard. Saving profiles and lighting effects to the keyboard is straightforward but may take the software a few tries to save onto the board. HyperX’s NGenuity software had a similar issue last year, though iCUE is nowhere near as frustrating. Aside from those hiccups, iCUE looks a lot better than it did in its previous form.

An admirable aspect of the iCUE software is that it’s upfront in telling the user they need to have a high-performance PC to run 8,000 Hz hyper-polling. The K70 Champion Series ships with 1,000 Hz polling active instead of the 8,000 Hz hyper-polling. This move makes sense considering using an 8,000 Hz polling rate will dent your CPU usage and some users may not have the overhead for that extra usage. Our reviewer would like to see the same level of transparency from Razer in the future.

The K70 Champion Series has a full feature set that justifies its reasonable price, even if its main draw falls flat. Modern touches like a detachable USB-C cable, PBT keycaps, and standard bottom row also help futureproof the K70 Champion Series. If you’re a Corsair fan and haven’t updated your keyboard in a while, you should definitely check this keyboard out since it ships with a more CPU-friendly 1,000 Hz polling rate. But if you upgraded not too long ago and aren’t into the impending 8,000 Hz polling rate wave, you can skip this one.