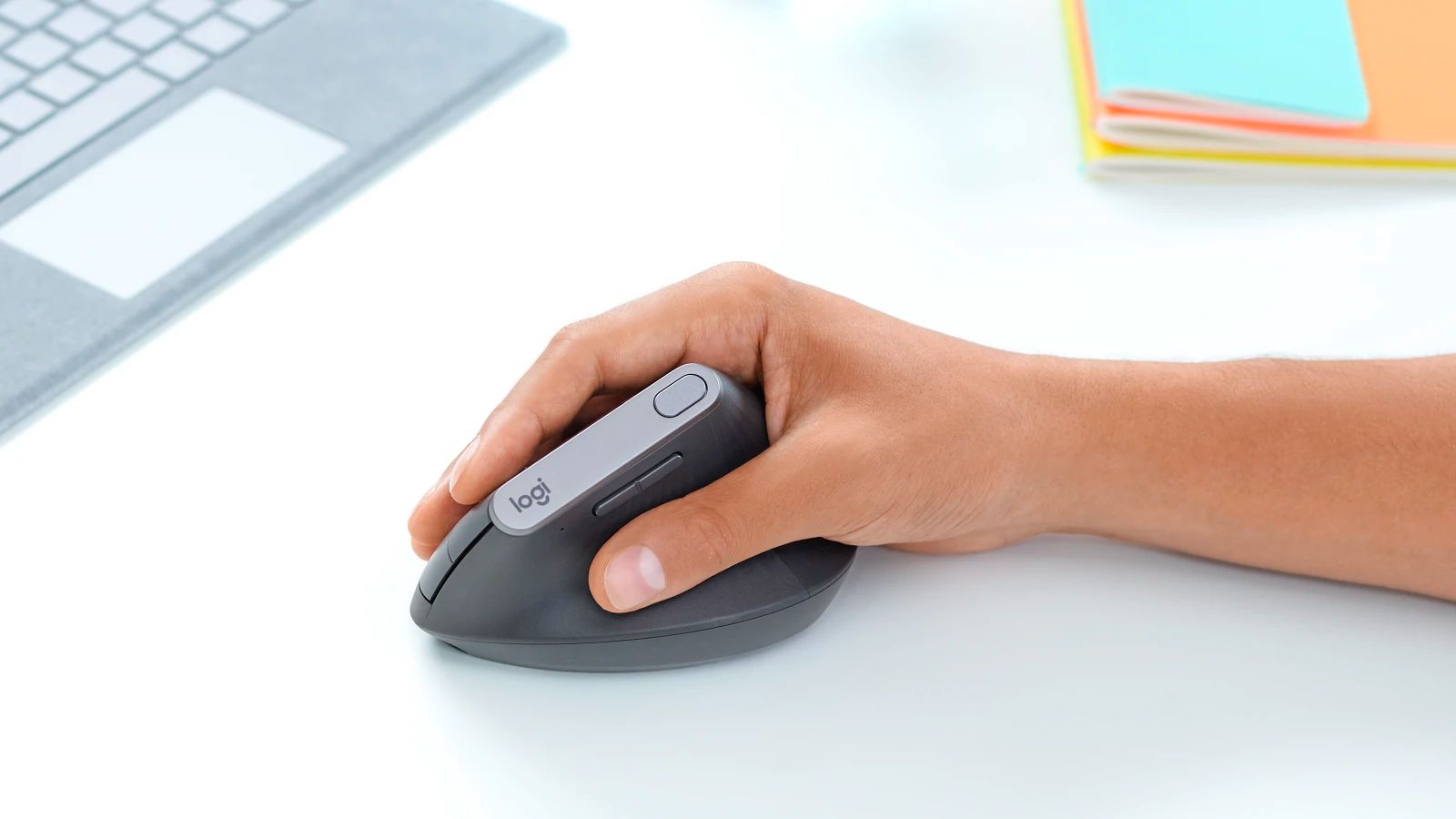 Vertical mice have an ergonomic shape designed to reduce strain on users’ wrists. Many users spend hours at their desk every day and increase their chances of getting repetitive strain injuries (RSIs) or carpal tunnel syndrome because of their posture and hand positioning.

Ergonomic alternatives like vertical mice reduce stress on the wrists by keeping them in a more natural upright position, keeping your wrist and arm more relaxed.

But while a vertical mouse may be better for your wrists, it can take a while to get used to the new position. Most vertical mice resemble a regular mouse turned on its side but have a completely different feel.

Logitech’s MX Vertical Wireless Mouse is an ergonomic alternative to the regular mice in its lineup. It has a classy grey and silver appearance with a large base doubling as a hand rest. There’s a prominent 57-degree curve on the right side for users to get a tight grip while accessing the left and right clicks and the scroll wheel.

There’s no cable on the MX Vertical Wireless Mouse to cause drag and reduce performance. This mouse works connects via Bluetooth or with Logitech’s unifying receiver and is compatible with most PCs. The unifying receiver works with other Logitech products and allows users to connect keyboards and other devices simultaneously. Logitech claims the MX Vertical Wireless Mouse can last around four months when fully charged through a USB-C cable.

Users looking for more functionality might consider the Evoluent Vertical Mouse D. It adds a third button beside the left and right-clicks, and there are also two extra thumb control buttons on the other side for added functionality. All three main buttons are curved for better grip, and there’s another discrete button behind them to change the DPI.

The Vertical Mouse D uses a combination of different plastics, including black and gray with silver for the thumb buttons. There’s also texturing behind the buttons to keep the user’s hand firmly in place.

While the Vertical Mouse D offers more functionality than the MX Vertical Wireless, it also costs more. Experienced vertical mouse users may be happy to pay the price, but novices might be better off with a more affordable alternative until they get used to the different feel.

Delux’s Wired Ergonomic Vertical Mouse is a more affordable alternative than the above mice. It comes in a gloss black finish with vivid RGB lighting to match the user’s other equipment. Unlike the other mice mentioned so far, it also comes with a removable wrist rest for extra padding. It’s a wired vertical mouse though, unlike the Logitech and Evoluent offerings.

Instead of flush buttons like the other mice on this list, the Delux has chunky buttons raised above the mouse’s body. This design makes them easier to find by touch, which is especially useful when users are still getting used to a vertical mouse. The buttons on the Delux mouse include a right and left-click with a scroll wheel on one side and two additional thumb-control buttons on the other side.

Unsurprisingly, the Delux has limited sensitivity options and isn’t really designed for competitive gaming. Its sensitivity ranges between 800 and 4,000 DPI, making it more suited to slower-paced games like Civilization or X-COM than Apex Legends or Overwatch.

While the Delux mouse has its flaws, it’s still a viable option. The wired connection might not be to some users liking, just like the limited sensitivity. On the other hand, it’s hard to complain at such a low price.

iClever’s TM209G has a unique shape compared to the others on this list. It maintains a vertical shape, but it is curved and the center is hollowed out, forming a U-shape. Despite its unusual design, the iClever mouse maintains a simple button layout with large left and right-click buttons with a scroll wheel and a DPI adjustment button sitting between them. There is also a pair of thumb control buttons on the other side to increase functionality.

Where the iClever mouse differs from the other mice on this list is its connectivity. Instead of using a wired or Bluetooth connection, it connects via a 2.4GHz wireless dongle. Wireless connections are known for being more stable and having less lag than most Bluetooth alternatives.

The low sensitivity range isn’t surprising considering that the mouse is primarily designed for office use. Users can only adjust the sensitivity between 1,000 and 1,600 DPI, but that should be enough for most daily tasks.

While it’s unusual design might not be for everyone, the iClever mouse decent specs for a reasonable price. It keeps things simple, coming in a single color with no lighting effects, and might be appealing to users who value functionality over looks.

The Anker 2.4G Wireless Vertical Ergonomic Optical Mouse sits in the same price range as the Delux option and may be a better option for office use because of its subtle styling. It comes in a matte black finish with a discrete silver accent on the left side. Like the Delux mouse, it has the left and right-click buttons and a scroll wheel on one side and two thumb buttons on the other.

This mouse emulates the iClever TM209G by connecting to a PC with a wireless connection. It works on the same 2.4GHz band and comes with the dongle included.

Despite having a wireless connection, the Anker mouse lags behind the other mice on this list when it comes to sensitivity. It ranges between 800 and 1,600 DPI, which matches the iClever TM209G.

Anker’s wireless mouse is comfortable and ideal for home or office use. While it excels by using a wireless connection, it’s let down by its older sensor and lack of customisability. But given its pricing, it’s still a worthwhile option.