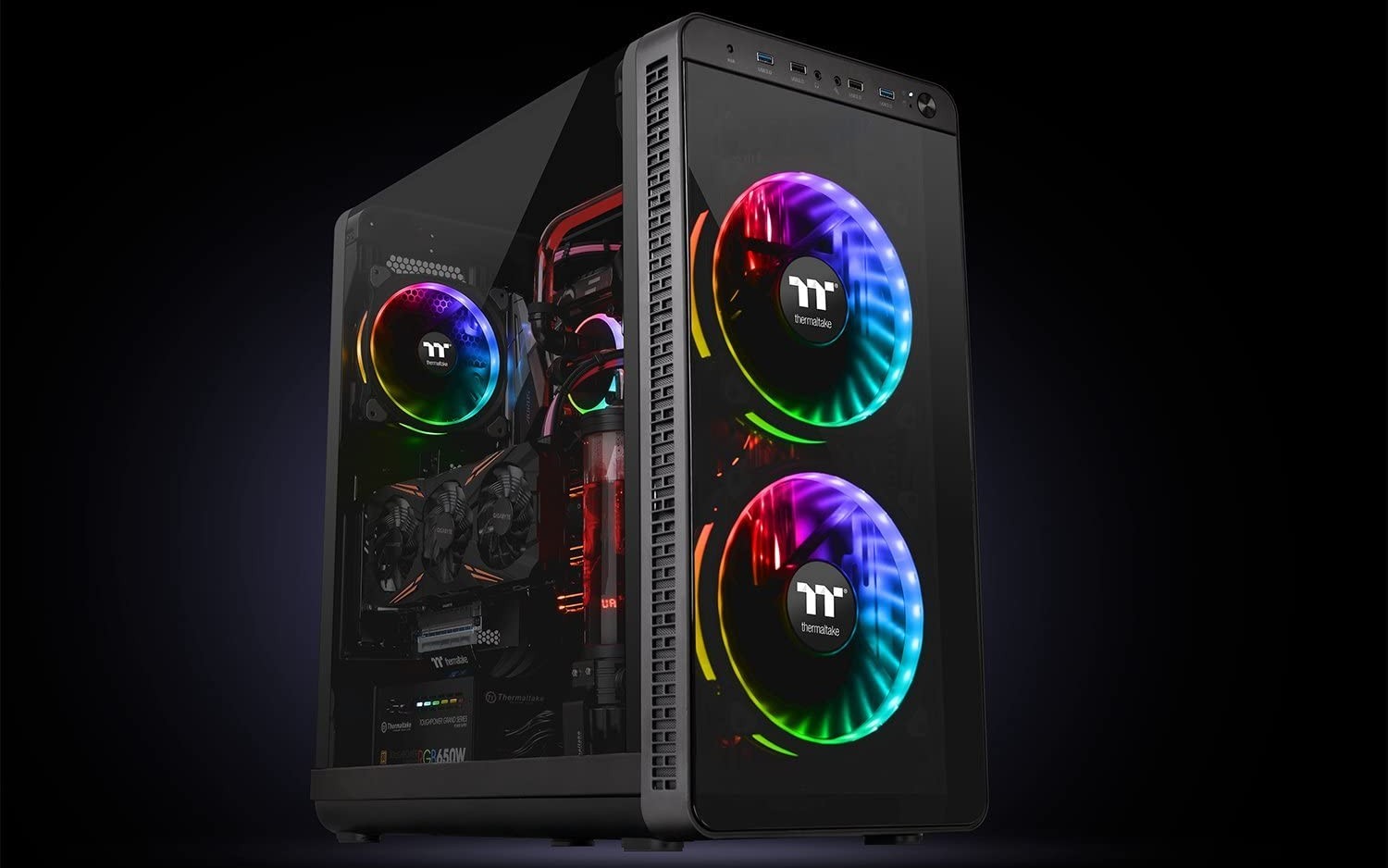 Gaming PCs use high-performance components that generate heat as they work. While some components like the central processing unit (CPU) and graphics processing unit (GPU) have built-in cooling features, the case’s interior can still get hot, leading to faster wear and tear.

Most cases combat the heat issue by having fans to regulate the airflow and expel hot air. The fans are usually configured in a push/pull configuration. This means the fans in the front suck in cool air from outside, and the rear fans expel hot air from inside the case.

Modern cases often come with built-in fans and typically have space to add more. The most common fan size is 120 millimeters, followed by 140-millimeter alternatives. While the larger 200-millimeter fans are also very effective, they are bulky and incompatible with some cases.

Besides their cooling performance, fans can also have an aesthetic function, especially when paired with RGB lighting. RGB lighting can brighten up a build and add some flair. The best RGB fans have multiple LEDs and software to configure the colors or sync them with other devices like mice or keyboards.

Corsair’s LL120 Series excels in cooling and providing bright RGB lighting. As a pulse width modulation (PWM) fan, it spins slower and produces less noise when the system isn’t too hot, and it turns faster and generates more noise when the temperature is high, and it needs to cool the PC.

The LL120 Series fan comes as standard in many cases and is known for its cooling performance. It spins between 360 and 2,200 rotations per minute (RPM), generates airflow of 63 CFM (cubic feet per minute), and operates at around 36 decibels (dB).

Apart from its cooling performance, the LL120 Series has vivid lighting. Each fan has 16 individually addressable LEDs, with four on the rotor hub and 12 on the outer ring. When the LL120 Series is bought as a set of three, it comes with a Corsair Lighting Node. The node acts as a hub to connect the fans, and it integrates with the iCUE app for users to configure the fans.

It’s hard to go wrong with Corsair’s LL120 Series fan. Not only does it provide efficient cooling and customizable lighting, but it’s also reasonably priced and includes a Lighting Node with the three-pack.

The Thermaltake Riing Quad 120mm is the same size as the LL120 Series, but it’s almost double the price. A couple of reasons why it’s so expensive are its extensive lighting and advanced software.

Compared to the LL120 Series, the Riing Quad 120mm has a slower rotation speed and generates less airflow. This fan spins between 500 and 1,500 RPM, generating airflow of 40.9 CFM. Due to the slower fan speed, the noise levels are also lower at 25dB.

One of the standout features of the Riing Quad 120mm is its extensive lighting. There are a total of 54 LEDs spread through four rings. The two outer rings have 18 LEDs each, and the two inner rings have nine LEDs.

Another strong point of this fan is the software. Thermaltake offers the TT RGB plus app for desktop and mobile users, allowing them to control the lighting anywhere. The app also has Alexa compatibility, but a separate device is needed to support it.

While the Riing Quad 120mm provides decent cooling, it’s quite pricey because of the lighting and app features. It’s worth it for users looking for the best lighting possible on a fan, as long as they’re willing to pay the price.

The Cooler Master SickleFlow 140 comes as a single fan instead of a three-pack like the LL120 Series and the Riing Quad 120mm, but it’s reasonably priced and generates impressive airflow.

Considering its larger size, it’s no surprise that the SickleFlow 140 pumps out more airflow than the other fans mentioned so far. It runs at between 640 and 1,400 RPM and generates airflow of around 67 CFM. The noise levels caused by the SickleFlow 140 are also lower than the previously mentioned fans, running between 10 and 27 decibels.

Cooler Master’s SickleFlow 140 may offer better cooling performance, but its lighting can’t match the LL120 Series and the Riing Quad 120mm. It only has six addressable LEDs with a holographic sticker to refract the light. One of its advantages is that it’s compatible with third-party software like Asus Aura and MSI Mystic Light.

The main appeals of the SickleFlow 140 are its cooling ability and affordable price. While its lighting may be basic, it can still add color to a build and is compatible with products from other vendors.

While 200-millimeter fans offer the most effective cooling, their massive size limits their use. Thermaltake’s Riing Plus 20 is a high-end fan that offers outstanding cooling and RGB lighting, but it doesn’t come cheap.

The Riing Plus 20 blows away the competition listed here in the airflow department. It spins at a lower rate of between 500 and 1,000 RPM and generates massive airflow of 117.96 CFM. While it generates high airflow, the Riing Plus 20’s noise levels are about average at 29.2dB.

Lighting is another area where the Riing Plus 20 excels. It has 11 addressable LEDs, and like the Riing Quad 120mm, it works with the Thermaltake TT RGB Plus mobile and desktop app. The Riing Plus 20 also comes with a digital fan controller with a five-fan capacity, so it’s easy to integrate into a system.

Although the Riing Plus 20 offers one of the best mixes of performance and lighting, it has some major drawbacks. Its size might not fit some PC cases, and its high price might also be out of reach for many users.

Builders looking for an affordable cooling solution with RGB lighting might consider the Cougar Hydraulic Vortex. This RGB fan is reasonably priced and comes with a wireless remote control and Cougar’s Core Box fan controller.

While the Hydraulic Vortex has an affordable price, its performance can still match more expensive alternatives like the Riing Quad 120mm. This fan generates around 43.54 CFM and spins between 600 and 1,500 RPM. It’s also reasonably quiet, with noise levels of around 26dB.

There’s no doubt that the Hydraulic Vortex punches above its weight when it comes to lighting and performance. It can match the airflow of the high-end Riing Quad 120mm and includes a fan controller and remote for a fraction of the price.