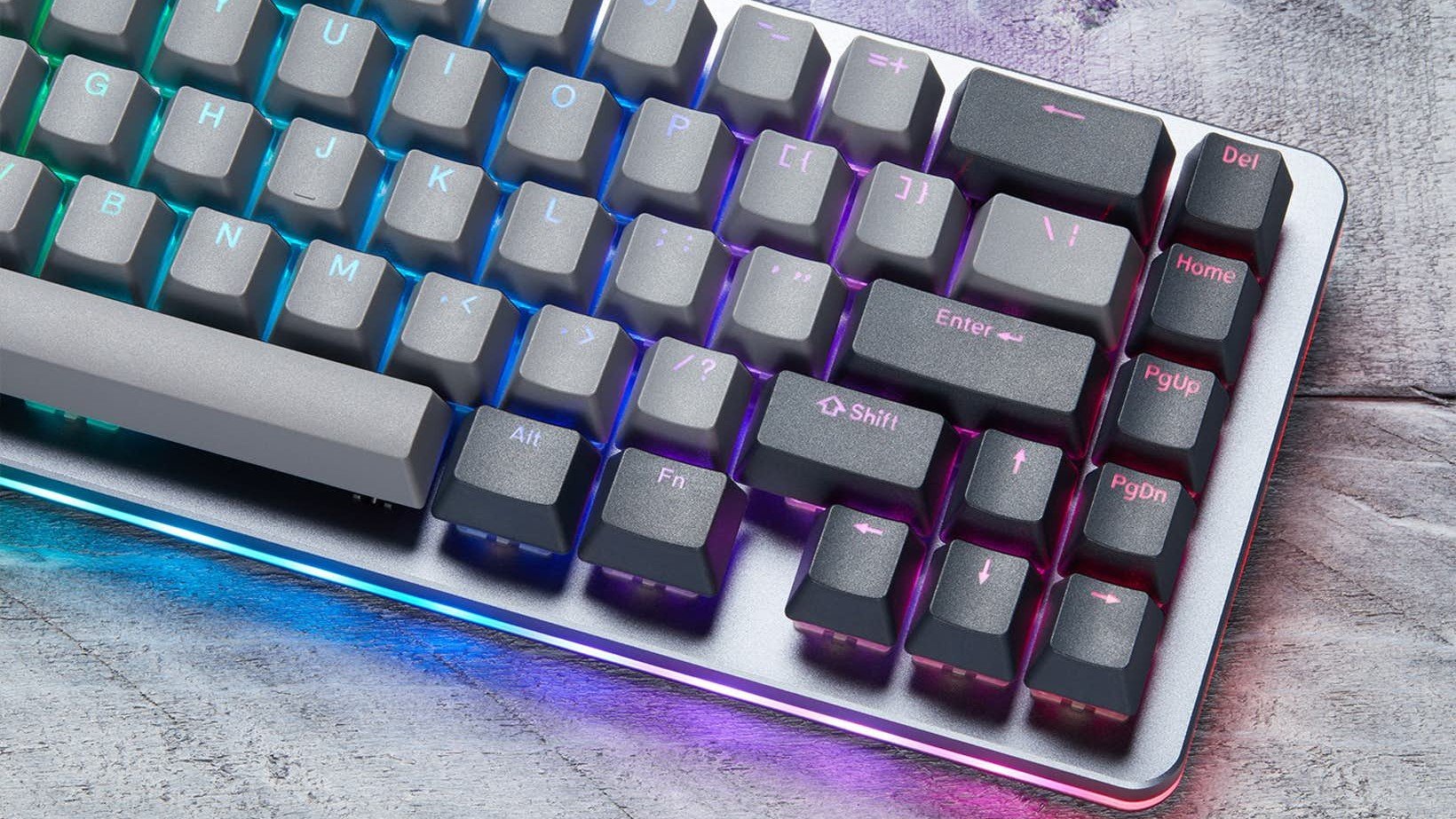 Thanks to their convenience and practicality, mini keyboards have grown from their enthusiast beginnings to mainstream popularity.

One of the main reasons for their rise is that they cut off unnecessary keys that most gamers don’t use. The smaller mini keyboards are easier to transport to tournaments, providing more desk space.

One-handed keyboards are designed exclusively for gaming and only have a handful of keys. Unlike the other mini gaming keyboard types, one-handed options aren’t great for typing or office work because their limited keys don’t cover the whole alphabet.

The Razer Huntsman V2 TKL is geared towards pros looking for the most responsive switches and a fast polling rate. At 8000Hz, its polling rate is one of the highest of any gaming keyboard, but the speed improvement might only be noticeable by players with 240Hz or 360Hz monitors.

Instead of mechanical switches like most mini keyboards, the Huntsman V2 TKL boasts Razer’s proprietary optical switches. When you press an optical switch, a light beam travels through the stem to actuate the key. Optical switches are faster than mechanical alternatives and more durable, with an expected 100 million press lifespan.

Lighting fans will be glad to hear that there’s per-key RGB lighting as well as custom downloadable profiles for compatible games like Apex Legends and Overwatch through the Chroma App. They can also set macros and profiles with Synapse 3.

The Huntsman V2 TKL’s high polling rate and optical switches make it stand out from other mini gaming keyboards. On the other hand, it’s pretty pricey, and many buyers won’t notice the performance difference over keyboards with lower polling rates.

The Drop ALT Mechanical Keyboard gives buyers unlimited switch options and has outstanding build quality. Buyers can get this keyboard with popular switch types like Cherry MX Blues or Brown or use the hot-swapping feature to add whatever switches they prefer. The keycap and switch pullers are included in the box.

There’s no doubt about the Drop ALT’s quality, and it oozes class with a rugged aluminum frame and high-quality PBT doubleshot keycaps. Its magnetic feet and dual USB-C ports set it apart from the other keyboards on this list. The USB-C ports allow users to connect the cable on either the left or right side of the keyboard, while the magnetic feet can attach at various angles to increase or reduce its height.

Software customization isn’t as easy as the BlackWidow TKL because this keyboard uses open-source QMK software. It’s not as user-friendly as Razer’s apps, but it gets the job done and allows users to map additional layers and customize the lighting.

Quality comes at a premium, and the Drop ALT is no exception. Its design and hot-swapping features are top-notch, but it costs significantly more than the Huntsman V2 TKL. This keyboard is worthwhile for enthusiasts who’ll use the hot-swapping function or buyers willing to pay extra. Everyone else may prefer the other options below.

Ducky’s One 2 Mini RGB has an eye-catching two-tone design and is available with an extensive range of switches.

This keyboard has an all-plastic design, but it’s firm with no flex. The top plate and doubleshot PBT keycaps are black, while the bottom frame, including the adjustable feet are white. Like the Huntsman V2 TKL and Drop ALT, it has a detachable USB-C cable. Ducky also throws in a few unique keycaps to increase the coolness factor.

There’s no shortage of switch options for the One 2 Mini. It’s available with an extensive range of options from Cherry MX, Kailh, Gateron, and TTC, including the popular Red, Blue, and Brown variants.

One of the areas where the Ducky One 2 Mini RGB lags behind the alternatives mentioned so far is its software, or rather, lack of software. The keyboard has adjustable RGB lighting with three layers of macros and up to six profiles, but the only way to configure it is with a combination of keypresses. While this system gets the job done, it can be unnecessarily complicated for some buyers.

Mini gaming keyboards don’t get smaller than the Cooler Master ControlPad. Its size and limited keys make it more of a niche product, but it’s still a worthwhile choice for players wanting minimal clutter and the most deskspace possible while they play.

Compared to the other keyboards mentioned so far, the ControlPad has a simple yet functional design with 24 numbered keys in a grid layout and a pair of aluminum scroll wheels. If numbered keys aren’t your thing, replacement keycap sets with gaming, Premiere Pro, or Photoshop symbols are available at an extra cost. Cooler Master also includes a detachable wrist rest with plush leatherette padding to provide some support.

The Control Pad comes with either Cherry MX or Gateron Red switches, standard options on many mechanical keyboards. A different feature, though, is the pressure-sensitive switches. Cooler Master calls it Aimpad, and it uses infrared sensors to detect the key’s movements and set different actuation points for each one. This feature allows users to map multiple functions to a single key at different actuation points similar to an analog stick.

Although the Control Pad isn’t the best for typing, it has more than enough keys for gaming with the added benefit of pressure-sensitive keys. Some buyers might not like the numeric keycaps, but they are easily replaceable.

Mini keyboards don’t have to be expensive. The SteelSeries Apex 3 TKL  costs far less than any alternatives on this list, but there’s a catch. It comes with membrane switches instead of mechanical or optical variants. Most standard keyboards come with membrane switches, known for their mushy feel. On the other hand, they are durable and inexpensive.

Thanks to its membrane switches, the Apex 3 is IP32 certified and has better dust and water resistance than the other keyboards on this list. It’s capable of enduring light spills, although it’s not advisable to start spraying or splashing water on the keyboard.

Apart from the membrane switches, the Apex 3 can rival the other keyboards on this list regarding features. It has a stiff plastic frame with six dedicated macro keys and a scroll wheel. Buyers can adjust the 10-zone RGB lighting with the SteelSeries Engine app.

While the membrane switches might turn off some buyers, the Apex 3 is still a perfect entry point for beginners wanting a taste of mini gaming keyboards. It also has many similar features to its mechanical rivals but costs a fraction of the price.

Kechron K6 – The Kechron K6 is an aluminum-framed 65 percent keyboard that works with a USB cable or Bluetooth. It comes standard with Gateron switches, but it also has hot-swapping capability, so users can add whichever switches they prefer.

Anne Pro 2 – The Anne Pro 2 is a 60 percent mechanical keyboard available with a range of Gateron and Kailh switches, including the common Red, Blue, and Brown variants. Like the Kechron K6, it works with either a USB-C cable or Bluetooth.