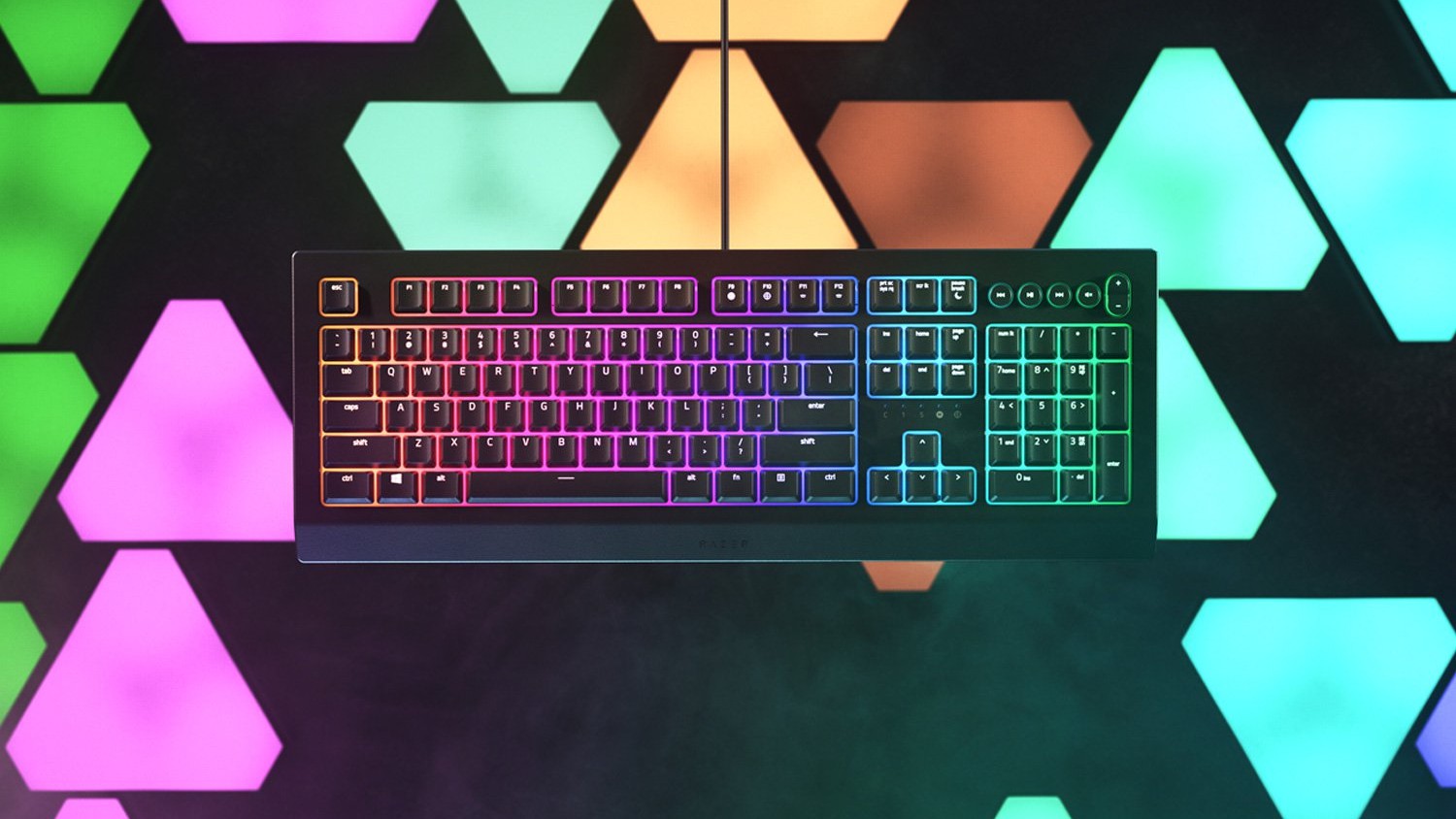 Want a new keyboard, but don’t want to shell out for the noise or premium of something mechanical? Then membrane keyboards have some features that are well worth considering.

Most keyboards manufactured today use membrane switches because of their simpler manufacturing process and lower cost. Instead of individual switches for each key, this keyboard type has a rubber membrane with dome switches that contact the circuit board.

Many serious gamers prefer mechanical keyboards for their responsiveness and customizations. Since every key has its own switch, every keypress is guaranteed to register. While membrane keyboards can’t offer the same level of responsiveness, many try to emulate the feel of mechanical keys. One of the advantages of membrane switches is their silent operation, which might be better for certain environments.

These are the best membrane keyboards for gaming.

The Cynosa V2 is a full-size keyboard that’s versatile enough for gaming or office work. It has an all-black design with per-key RGB lighting to add some flair. There are dedicated media keys on the top right corner to make things convenient for users who listen to music on their PC. Razer advertises the Cynosa V2 as spill-proof but doesn’t quantify the claim.

Many features on the Cynosa V2 are accessed through software. Buyers can adjust the per-key RGB lighting with Razer’s Chroma app, and they need the Synapse 3 app to configure different profiles and create macros.

Like most entry-level keyboards, the Cynosa V2 has some drawbacks. There’s no onboard memory, and some users may be disappointed at the lack of a wrist rest. It’s hard to complain at such a low price, and the Cynosa V2 is a fantastic entry point into the world of gaming keyboards.

The Logitech G213 Prodigy tries to bridge the gap between membrane and mechanical keyboards with its Mech-Dome keys. The keys are designed to mimic the feel of mechanical switches with four millimeters of travel distance and require 50 grams of actuation force. While this system can’t match the feel of genuine mechanical switches, it’s better than many membrane rivals.

Some features on the G213 Prodigy match the Cynosa V2. Both options are all-black full-sized keyboards with dedicated media keys in the top-right corner. One of the most significant differences between them is that the G213 Prodigy features an integrated wrist rest that adds to its size and makes it quite bulky. Like the Cynosa V2, it’s spill-resistant, and Logitech says it’s tested to 60 milliliters.

One of the areas where the G213 Prodigy can’t match the Cynosa V2 is its customization options. Instead of per-key RGB lighting, it only has five zones. The macros are also limited to the function keys and might not be enough for advanced users.

Despite its shortcomings, the G213 Prodigy is a worthwhile choice as a membrane gaming keyboard. It might be bulky and have limited lighting options, but it also has fast keys and a wrist rest for added comfort.

The other keyboards mentioned so far claim to be spill-resistant, but the Corsair K55 has official certification. Its IP42 rating means it can withstand water spray from less than 60 degrees from vertical and gives buyers some peace of mind about its durability.

Corsair’s K55 is another full-size keyboard with dedicated media keys in the top right corner. Where it differs from the Cynosa V2 and the G213 Prodigy is the inclusion of dedicated macro keys in a vertical orientation on the left side. These keys give users quick access to macros without remapping the regular keys. Another difference is the rubberized wrist rest that’s also removable.

Like most Corsair products, the RGB lighting on the K55 is configured with the iCUE app. The lighting options are limited compared to the Cynosa V2 and the G213 Prodigy, with only three lighting zones and a handful of presets available.

The K55 is durable and has a robust feature set for an affordable keyboard. It’s resistant to spills and has dedicated macro keys and a removable wrist rest. The limited RGB lighting is a minor drawback and probably won’t be an issue for most buyers anyways.

Many competitive gamers are switching to tenkeyless (TKL) keyboards because their compact size makes them easier to transport and frees up more desk space for mouse movements. The SteelSeries Apex 3 TKL cuts off the numberpad to make it smaller and lighter.

SteelSeries markets the Apex 3 as the world’s first water-resistant TKL gaming keyboard. Its IP32 rating means it’s protected against water spray from less than 15 degrees from vertical. While this rating is lower than the IP42 on the K55, it’s better than the unrated Cynosa V2 and G213 Prodigy.

As expected, the smaller size of the Apex 3 TKL means it can’t fit in the same functionality as the larger keyboards listed here. Apart from having no numberpad, the Apex 3 TKL only has a scroll wheel instead of media keys, but at least there are six macro keys on the right side. For a compact keyboard, the Apex 3 TKL has an impressive 10 RGB lighting zones.

There aren’t many TKL membrane gaming keyboards out there and it’s refreshing to see SteelSeries wandering into new territory. The Apex 3 TKL is ideal for buyers who want a TKL keyboard without paying the price of mechanical alternatives.

HyperX’s Alloy Core RGB remains a popular choice amongst gamers because it’s affordable and gets the job done. This keyboard has a lower price than its rivals on this list while retaining many of their features.

Like most options on this list, the Alloy Core RGB is a full-size keyboard with dedicated media keys. There are also dedicated keys on the left side to adjust the RGB brightness and switch between effects, but there are no dedicated macro keys. HyperX claims the Alloy Core RGB can withstand up to 120 milliliters of liquid, but there’s no certification like the K55 and Cynosa V2.

Where the Alloy Core RGB lags behinds its competitors on this list is its lack of software. It’s designed to be plug-and-play and isn’t compatible with HyperX’s Ngenuity software. The lack of software compatibility means that users can’t record macros and can only configure the five-zone RGB lighting using the dedicated keys.

The HyperX Alloy Core RGB is designed as a no-frills entry-level keyboard and doesn’t claim to be anything else. It’s a practical choice for budget-conscious buyers looking for their first gaming keyboard. Advanced users will be disappointed with its limited functionality and may be better off with other options on this list.