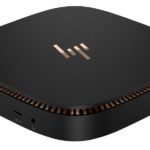 Back in the day, if you wanted to get a computer that you could carry around, the go-to options were laptops. Even though laptops are fine, they may come up short when it comes down to power. If we were to compare a similarly-priced mini PC and a laptop, a mini PC would almost always offer a better value in terms of specs.

If you don’t really use your computer on the go and only need it at work, school, or home, then a mini PC could be just right for you. Most mini PCs are significantly smaller than laptops so they’re also easier to carry around while being more powerful as well. They also have more ports than an average laptop so a mini PC can also end your struggle of carrying around dongles.

But, as gamers, what good is a piece of tech if you can’t run games on it? Initially, most mini PCs were being marketed as productivity machines. But there are some exceptions to this.

Even though most of these PCs may not be able to run the latest Call of Duty or Battlefield games on ultra settings, most are more than powerful enough to run games such as League of Legends, Dota 2 and CS:GO with a smooth frame rate.

The competition in the mini PC market is intense. Finding the right one for your specific needs may take hours. If your primary objective is to get some work done on these machines while being able to play some games, then our list should save you some time.

Beelink might not be a well-known brand, but it has some solid products on its lineup to challenge some famous brands like HP or Asus. The Beelink SEI8 is one of the most affordable mini PCs for gaming and offers smooth performance to support your gaming sessions. The device has a compact design and won’t occupy a lot of space on the desk. Also, It features an 8th gen Intel i5-8279U processor and Intel Iris Plus Graphics 655. You’ll also find 16G RAM (upgradable to 32GB) and 500GB SSD (upgradable to 2TB) under the hood.

The Beelink SEI8 mini PC supports dual-screen and 4K HD (4096×2304) content. This is an essential feature for gamers. Also, the device has an array of ports, including one Ethernet, four USB 3.0, two HDMI, and one Type-C port. 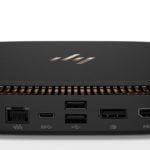 Business meetings tend to get intense. Tons of Excel files alongside a conference call may require some specs to back it up. Well, those specs can also be used for gaming when you’re at home.

The HP Elite Slice is being marketed as a productivity machine but should really be considered a decent all-around system. It has a form that resembles a headphone case and only weighs 2.31 pounds.

The Intel HD Graphics 530 graphics card inside is more than enough to satisfy your low to mid-level gaming needs.

When it comes to mini PCs, Apple Mac Mini is a name that shines to the brightest. It is a versatile PC with massive power thanks to its M1 chip. While most Mac Mini buyers may use it for business or office purposes, it could be a solid choice for gamers too. For a bit above $1,000, you’ll get a stylish and compact device with an M1 processor as a worthy replacement for Intel chips. Also, 16GB of RAM and 512GB of SSD storage are available. You can choose other configurations with a few hundred bucks less or more.

While Apple Mac Mini features one of the most powerful processors ever, it experienced a price drop compared to its processors. Regarding the connectivity ports, you will have everything necessary for a gaming session. Also, the HDMI port on this device can handle up to 6K resolution.

Intel is not just a producer of internal components, and it has some quality mini PCs in its lineup. Intel’s Next Unit of Computing (NUC) lineup introduces NUC11BTMi9 with a core i9-11900KB processor and UHD Integrated graphics. This combination promises a decent performance for gaming. The device is also open for further upgrades. Intel also offers 14 different configurations, and you can choose each according to budget and needs.

The design of Intel NUC11BTMi9 might be a bit bulky compared to other products in this list, but for being a full-fledged device, sometimes it is necessary to look a little bulky. The device also offers a great port selection. 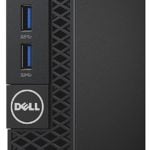 As its name suggests, the CF5C is one of the most compact options out there when considering its specs. Its form resembles a console and it only weighs 6.1 pounds. The CF5C isn’t customizable and is the top micro PC that Dell has to offer.

The CF5C packs an i5-7500T, 8GB of RAM, 256GB SSD, and an integrated Intel HD Graphics 630 graphics card. In terms of specs, it’s more than capable of doing anything work and media-related.

You can definitely consider this mini PC if you aren’t a hardcore gamer. The integrated graphics card should be enough to satisfy your low to medium gaming needs.

Sacrificing a good GPU is just the price we have to pay for a smaller form factor and a lighter weight.

The OptiPlex 7070 Ultra is a product for those looking for an entry-level mini PC for gaming and have a tight budget. The product comes from Dell, and for less than $700, it offers you an Intel i5 8-8265U processor with 8GB of RAM. The Dell OptiPlex 7070 Ultra is highly upgradeable thanks to a modular design. When you see the OptiPlex 7070 Ultra for the first time, its slim and lightweight design is impressive. You can easily place it behind a monitor. The device also weighs only 1.000 lbs (453 grams). 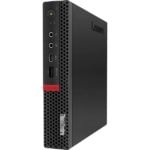 Though connecting your PC to your router with an Ethernet cable is the best way to eliminate ping and lag, sometimes it may just not be possible. If your router is downstairs and you don’t want to drill a hole through your ceiling, going wireless will be the only option. Most mini PCs come with Wi-Fi adapters inside, but it’s hard to match the quality of the one inside of Lenovo’s ThinkCentre M720q Tiny.

Lenovo’s ThinkCentre M720q Tiny owes most of its wireless connection quality to the antenna slot it has on the back. You should find a small antenna inside its packaging, which you can simply screw in. This antenna increases your mini PC’s Wi-Fi range alongside bettering the overall connection quality.

There’s a lot to consider when picking your ThinkCentre M720q since there countless options when it comes to the internals it stores. The RAM options vary from eight to 16GB, while you can choose from different i3, i5, and i7 processors. You could also decide to bump its storage with a 1TB hard drive or with a larger SSD. All models come with an integrated graphics solution, however, which decreases M720q’s gaming potential.

This compact PC is still enough for users with light gaming habits, and it handles any productivity task like it’s a walk in the park. 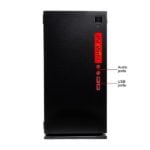 Compared to all the tiny PCs on our list, SkyTech Legacy Mini could look like a giant. Though it’ll almost be impossible to fit it in a backpack, it’s still compact enough to move it around easily. SkyTech Legacy Mini made it into the list because it didn’t feel complete without an option for hardcore gamers. Most mini PCs lack a dedicated graphics card and cooling system to play resource-hungry games, which leaves competitive gamers empty-handed.

You’ll get to choose from processors like AMD Ryen 7 1700 and 2700 to go with your Legacy mini, alongside graphics card options such as Nvidia’s RTX 2060 and 2070. Like most mini PCs, this gaming beast also comes with a Wi-Fi antenna that further increases its portability. You’ll be able to set it up anywhere around your house, and you should be good to go if you have a strong enough Wi-Fi signal.

SkyTech also issues a year-long warranty for all of your parts in addition to what they already have, doubling the available protection. The rig’s standard cooling setup ensures a decent airflow, but you can opt-in for water cooling as well. Considering the limited space inside the case, water cooling does wonders to keep the temperatures low.

We would hate to be the ones to say “have you considered this other option?” while you’re shopping for a mini PC. But if you have a decent laptop already, you may also benefit from an external GPU.

EGPUs are basically graphics cards that are housed inside specially designed panels. Configuring them is quite easy since you only need to plug them into your laptop or your gaming machine via a Thunderbolt 3 or any advised type of port to get them running. Most have a quite straightforward installation process since your system should detect them, but some may require you to install additional drivers.

A laptop with decent-enough specs to match a mini PC should already be good enough for light gaming. It’s quite difficult to get a high-tier gaming performance out of a mini PC without paying the big bucks, making the external GPUs an excellent form of power boost for your laptop.

The portability side of things will obviously be worse, but an eGPU can be the difference between getting smooth frame rates in a triple-A title and being able to run it.