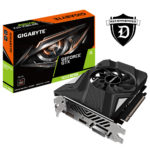 Not every gamer needs a state-of-the-art PC that rocks the most powerful hardware. Sometimes size does matter, and building a compact PC can be more beneficial than getting yourself a stacked full-size tower.

Smaller PC cases offer a lot less room to work with, and that is where low-profile graphics cards come into the picture. They’re relatively slimmer and smaller than regular GPUs. Their smaller size also assures a better airflow for your already tiny system, making them a solid choice to lower the overall temperatures.

While there’ll be a significant performance difference between the full-sized and small-sized versions of a particular GPU model, you’ll be just fine playing competitive games like VALORANT, CS:GO, Dota 2, League of Legends, or even Fortnite. They also cost quite less than full-sized models, which makes them budget-friendly as well.

Picking the correct low-profile graphics card can be tough since the market’s filled with dozens of different versions of the same GPU. We went through all the viable options that are currently available and compiled the following list so you can save some time from researching, and get busy gaming. 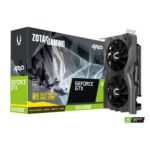 Zotac’s version of GTX 1660 is equipped with two silent fans and a base clock speed of 1,530MHz. The clock speed will boost up to 1,785MHz under heavy load, and its total video memory of 6GB is one of the higher ones you’ll find in a low-profile graphics card.

The GPU featuring Nvidia’s Turing architecture draws 125 watts of power and uses an eight-pin power connector. If you’re looking for the absolute best low-profile graphics card capable of putting out stable and smooth frame rates, then look no further than a GTX 1660 Super low-profile variant.

If you’re curious about this GPU’s capabilities, PCMag’s lab testings showed that it could punch above 300 frames-per-second (fps) on CS:GO when paired with the right components. 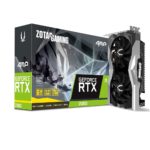 This one may look a bit taller than your average low-profile graphics card, but it’s still shorter than a 2080 TI.

Opting-in for Zotac’s compact version of RTX 2060 will possibly give you the best graphical performance out of your small form factor PC, but it’ll also cost you the highest. RTX 2060 Amp features a base clock speed of 1,365MHz, and it can scale up to 1,800MHz when it’s boosted. Featuring a video memory of 6GB, the card only draws 160 watts in power and uses an eight-pin power connector.

Despite its small size, RTX 2060 Amp also supports ray-tracing like its bigger siblings, but turning it on may decrease your performance.

Regarding its gaming performance, the card is more than capable of pushing above 100fps on Far Cry 5 and 200fps on Rainbow Six Siege in 1080p. Your results may vary depending on the other pieces in your rig, however. 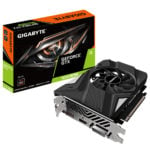 Though the first two entries on our list are two of the most powerful low-profile graphics cards you can get, they may be overkill if you only play less resource-hungry games.

Gigabyte’s small form factor version of 1650 Super has a base core clock speed of 1,740MHz, and it can boost itself up to 1,875MHz when needed. It comes with 4GB of RAM and Gigabyte recommends combining it with at least a 350-watt power supply.

With the right supporting cast, the card reaches above 250fps on CS:GO and 60fps on Grand Theft Auto V.

Considering its price point, Gigabyte GeForce 1650 Super OC 4G offers an excellent deal of price for performance, and it also features a DisplayPort, which’s getting rarer to find these days. 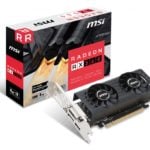 MSI Radeon RX 560 4GT LP OC is one of the few small GPUs by AMD to consider picking up, and it comes with 4GB of virtual memory. With its core clock speeds up to 1,196MHz, you should be able to push above smooth frame rates while playing competitive games.

One significant advantage it has is that it draws a lot less power than its competition at 60 watts, but MSI still recommends a power supply that delivers above 400 watts of power. The card features three inputs being DisplayPort, HDMI, and DL-DVI-D.

When it comes to real-world gaming performance, the card can output above 30fps on Shadow of the Tomb Raider in Medium graphics settings. While it’s able to achieve above 130fps on Fortnite with the lowest settings, you can still experience dips to around 70 frames if you decide to land in a crowded area. 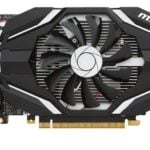 The 1050 TI is a gen behind now, but it doesn’t mean that it’s outdated by any means. In fact, Turing graphics cards’ release lowered this card’s price to the point that you can easily find bargain deals. This is a massive plus for anyone who cares about the price-performance ratio they’ll get with their GPU.

MSI GeForce GTX 1050 TI 4G OC has 4GB of virtual RAM and a base clock speed of 1,341MHz. The card can boost itself to 1,455MHz under heavy load, which’s still lower than most of its competition. Don’t let it fool you, however, since these values are more than enough for gaming in 1080p.

MSI’s take on the GTX 1050 TI 4G OC consumes 75 watts of power, but you should still aim for a PSU that can deliver wattage higher than 300 to be safe.

When combined with parts fit for gaming, the 1050 TI 4G OC can push over 99 FPS on games like Overwatch. 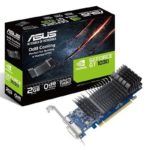 Each gamer has different gaming habits. Some enjoy competitive games, some prefer AAA titles, and many gamers love playing less hardware-dependent indie games and old Nintendo Entertainment System (NES) titles. If you belong to the third category, you can get away with cutting corners that other gamers can’t effort to pull off in their rigs.

ASUS GeForce GT 1030 features a passive cooling system that lowers its power consumption and price. The GPU has 2GB of virtual memory and features two outputs being HDMI and DVI-D. It features a base clock speed of 1,266MHz, which maxes out at 1,506MHz and GT. The card itself consumes 30 watts of power, but Nvidia recommends a 300 watt PSU, at least to avoid any power issues.

While you’ll be able to achieve frames above 100 in most indie games, GT 1030 can also produce stable frames between 25 and 30 in games like Battlefield V and Sekiro Shadows Die Twice. 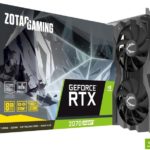 If you trust your cooling system, then you can only benefit from pushing your rig to its limits. While RTX 2070 Super Mini can be considered big in size compared to its competition, it’s still small enough to deserve the mini tag in its name.

ZOTAC Gaming GeForce RTX 2070 Super Mini features 8GB of GDDR6 virtual memory and comes with four outputs. Three 1.4 DisplayPorts and an HDMI slot should be more than enough to sustain a multi-monitor setup. The card has a base clock speed of 1410 MHz and a boosted clock speed of 1,770MHz, making it powerful enough to accomplish any heavy task you can throw at a small form factor PC.

This card consumes about 215 watts of power, and Zotac recommends a power supply that has a capacity of at least 650 watts. This combination can significantly increase the cost of your rig, but performance doesn’t grow on trees.

ZOTAC Gaming GeForce RTX 2070 Super Mini is more than powerful to dish out above 350fps in CS:GO and will net your smooth frame rates in most recent AAA games as well.