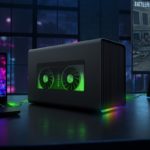 Gaming on a high-end desktop PC will give you the best experience in terms of performance and high quality. While they’re powerful machines, moving them around can be too much of a hassle. You’ll always need a monitor, a keyboard, and a mouse to use your system.

Though gaming laptops emerged to fix this problem by featuring desktop-grade graphics cards and top-of-the-line cooling systems, their size and weight decreased their usability for mobile users. You can always take your gaming laptop to school or work, but you’ll be working out your arm muscles simultaneously.

Ultrabooks’ small form factor makes them the perfect candidate for such mobile usage, but most lack a GPU, which prevents them from running games smoothly. This is where external graphics cards (eGPU) come in. Despite being a niche product, eGPUs allow gamers to power up their ultrabook and non-gaming laptops whenever they need to.

The most popular options on the market support Thunderbolt 3, making them compatible with almost all recent laptops. While some come with an included GPU, others may require you to splurge on a new graphics card, which plays a considerable role while evaluating which eGPU you should buy.

Here are some of the best eGPUs on the market. Any pick off this list should help you take your gaming experience to the next level. 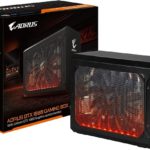 If you’ve been in the market for a new motherboard or GPU, the name Gigabyte will sound familiar. The company specializes in the hardware industry and it builds eGPUs with the graphics cards it also produces. This helps keep the cost down, making the Aorus gaming boxes more accessible.

There’s an Aorus gaming box for every type of gamer. The graphics card options you’d prefer inside range from AMD RX 580 1070 to Nvidia GeForce RTX 2080 TI. In addition to giving you access to a powerful GPU, the Aorus also doubles as a hub. With an HDMI port, three display ports, three USB ports, and a single DVI-D port, this eGPU turns your laptop into a desktop PC in seconds.

It’s one of the most portable eGPUs on the market. Depending on the GPU you prefer to have inside, it should be able to run almost all of your favorite games.

While the setup process is a bit tricky on MacBooks, it still doesn’t take more than 20 minutes. The Aorus gaming box is essentially a plug-and-play device on Windows laptops. 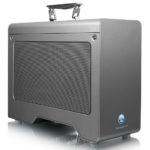 The name AkiTio may not sound familiar to most gamers. But the U.S.-based firm mainly focuses on storage solutions and external chassis systems, making them a perfect candidate for manufacturing eGPUs.

While the Node is compatible with almost all GPUs on the market, it has a bulky build and a high weight of nearly 15 pounds. Its size also allows for better airflow, which keeps your GPU cooler by a few degrees compared to other options.

It comes with a single Thunderbolt 3 port in the back, which can only be a drawback for ultrabook users with fewer USB ports. If you don’t have enough ports to plug in your peripherals, you may need to invest in a portable USB hub.

Though the Node supports almost all GPUs on the market, you should still check out all the compatible GPUs on AKiTiO’s official website. 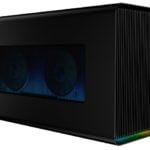 When the topic is anything related to gaming, it’s hard not to find a Razer product tailored for it. Most Razer products differentiate themselves from their respective competition with their design and quality-of-life features—and it’s no different for the Razer Core X.

The Razer Core X’s exterior design makes it look like an extension of your laptop or PC. In addition to featuring a Thunderbolt 3 port for maximum compatibility, it’s big enough to house almost all graphics cards on the market. It also backs up its size with a robust power supply that boasts 650 watts, making it the perfect candidate for hardcore gamers.

It lacks extra ports, which can be a deal-breaker for gamers running low on connectivity ports. But its affordable price compared to its competition makes up for that absence.

While the Razer Core X doesn’t come with any RGB lightning, one of the reasons that keeps its cost down, you can also opt-in for its better-looking sibling, the Razer Core X Chroma. The Core X Chroma features all the characteristics of the regular Core X but also comes with the iconic Razer Chroma effects that allow you to have a mini disco in your room. 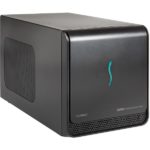 Most eGPUs offer limited customization options. You can change the graphics card inside if they’re bundled with graphics cards, but not all of them offer options in the power supply department.

Sonnet Breakaway comes with three different power supplies options: 350, 550, and 650 watts. This lowers the cost of a Sonnet Breakaway eGPU for anyone who isn’t planning to use a high-end graphics card inside.

It’s slightly smaller than its competition and comes with a dedicated fan inside the case, which helps keep the temperatures down. You can also choose to have a liquid cooling system inside your Sonnet Breakaway to further cool down your system.

Despite its portability and lighter weight, the inside of the Breakaway is spacious and you should be able to fit almost all full-length graphics cards inside. Though it dedicates most of its PSU resources to the GPU, the Sonnet Breakaway also spares 15 watts of power in case you’d like to charge your laptop through it.

Check out Sonnet’s official website before buying a GPU for it to make sure it’s compatible with the Breakaway. 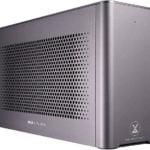 If portability and a professional look are on the top of your list of eGPU criteria, the Asus XG Station Pro brings both the performance and looks like it’s from a James Bond movie.

The XG Station Pro is one of the lighter models on our list, weighing 6.5 pounds. Carrying it around is a seamless process. It owes most of its low weight to its small size, which still allows it to house some of the best-performing graphics cards available.

The main compromise of the XG Station Pro is its power supply. At 330 watts of power capacity, the PSU may make it harder for you to use GPUs like RTX 2080 TI. Be sure to check out your desired GPU’s minimum power requirements before investing in one.

In addition to a Thunderbolt 3 port, the XG Station Pro also features a 3.1 USB port and two internal fans, which is surprising for an eGPU of its size. 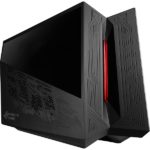 Gamer problems need gamer solutions. While the above Asus eGPU keeps it professional in terms of looks, it lacks the power to push a GPU to its limits.

Asus’ solution for higher-end GPUs, the ROG XG Station 2, comes with a 600-watt PSU and is big enough to store almost all GPUs on the market. The eGPU also doubles as a hub with four USB 3.0 ports, one USB Type B, and an ethernet port.

It’s certainly heavier and bigger than your average eGPU, but the ROG XG Station 2 serves more as a centerpiece that turns your laptop into a desktop machine when you get home.

It also comes with great RGB lights that sync with other Asus graphics cards that support Aura Sync. This technology allows gamers to sync all the RGB lights in their system, which increases its appeal to the eye. 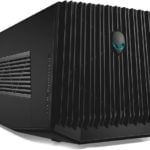 Ecosystems can improve an already decent product even further. Take a look at Apple, for example. While each Apple product features close-to-the-top specs, their compatibility with each other defines them.

Alienware takes the same approach with its eGPU and makes them only compatible with Alienware laptops. Though you won’t be able to use this eGPU without an Alienware laptop, it’s potentially the best option for gamers that already have one.

The Alienware Graphics Amplifier uses a unique port on laptops instead of the industry-standard Thunderbolt 3. It supports full-length GPUs that don’t need more than 460 watts to run and is surprisingly cheap compared to the market.

The Alienware Graphics Amplifier also features four USB 3.0 ports. Swapping out GPUs is also relatively easy, making it an excellent choice for anyone with multiple GPUs at hand.

Make sure to check out Alienware’s official website, though, to ensure it supports your laptop.