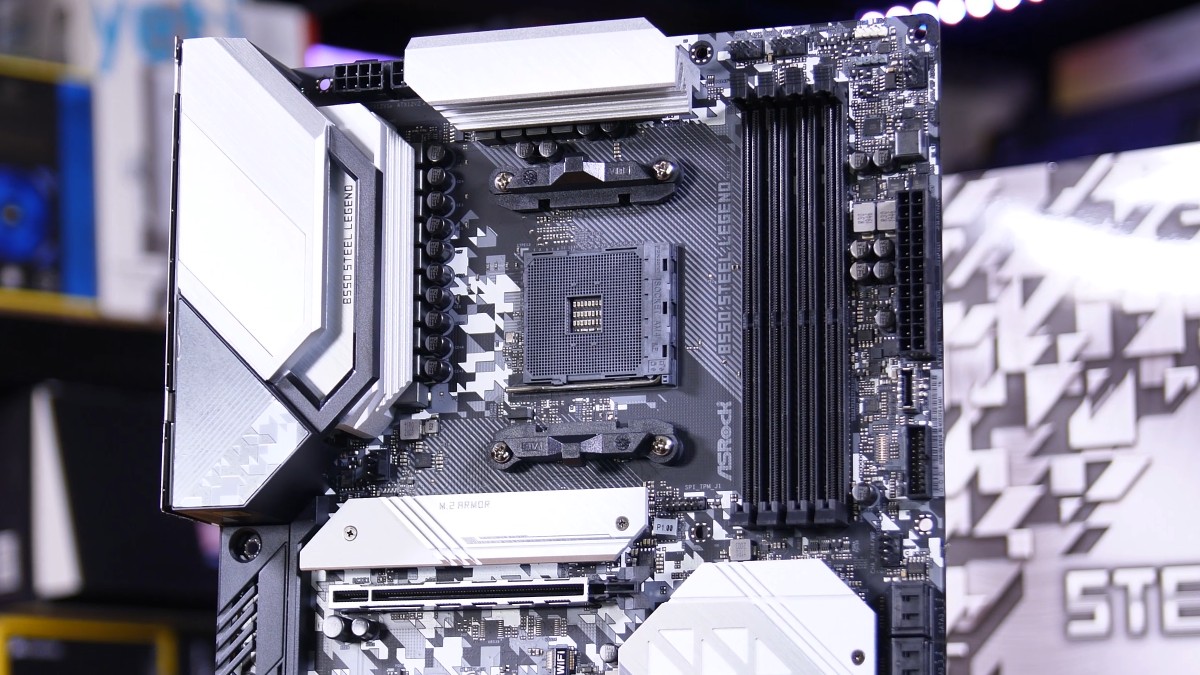 AMD B550 motherboards make an excellent foundation for a gaming PC, especially with the new AMD Zen3 chips. The new chips run around 19 percent faster than the older Zen 2 chips, and they also have Smart Memory Access to connect directly with the VRAM of a compatible graphics card.

The B550 sits in the middle of the range, but there’s a lot of overlap, and they can sometimes be more expensive than some B570 motherboards. Either way, the B550 is worth a look because of its features and future compatibility.

Here are some of the best B550 motherboards for gaming.

The Gigabyte B550 Aorus Master is a fantastic motherboard packed with features. It has a 16-stage VRM with a 70A power stage and four DDR 4 RAM slots with a 128GB limit. Network capability is also excellent with Wi-Fi 6 and a 2.5-gigabit LAN port included. There’s also a dual bios feature so you can overclock the board without worrying about corruption.

The Asus ROG Strix B550-E is another 16-phase motherboard ideal for 3rd Gen Ryzen processors and the Zen3 Ryzen 5000. This motherboard is perfect for games like Call of Duty or Apex Legends and features two M.2 slots with heatsinks for the latest NVMe SSDs. It also comes with a 2.5-gigabit LAN port and Wi-fi 6 internet.

Installing your graphics card is also simple, with the four PCIe slots of which two support PCIe 4.0. The ROG Strix B550-E is built for performance and features headers for fans and water cooling systems. There’s also built-in RGB lighting that’s configured using the Aura app. Other useful features include front and rear USB-C ports and 7.1 surround sound. This motherboard may be expensive, but it justifies its price with impressive performance.

The MSI MAG B550 is affordable and competes with the best budget gaming motherboards. It has a stylish black and white theme with a large heatsink protecting the 13-phase VRM. There’s also the usual features you’d expect from a gaming motherboard, including four DDR 4 RAM slots, two M.2 slots, and two full-size PCIe v4 x 16 slots.

MSI had to cut a couple of corners to keep the price low, and it shows. There’s no built-in Wi-Fi, and they’ve sacrificed the top-tier Realtek ALC 1220 audio codec in favor of the lesser ALC1200. There may be no Wi-Fi, but there are dual ethernet ports with one supporting 2.5-gigabit speeds and the other supporting 1-gigabit speeds. This motherboard has brilliant value and is a solid foundation for building your gaming rig.

The ASRock B550 Steel Legend is another low-priced motherboard that punches above its weight. You can tell by looking at the chunky heatsinks that it means business, and it doesn’t disappoint. This motherboard features a 14-phase VRM with high-quality Nichicon 12K capacitors with a lifespan of 12,000 hours. The inner layers of the PCB are also made from two-ounce copper to increase efficiency.

The B550 has all the gaming features you’d expect, like three CrossFireX compatible PCIe slots, 2.5-gigabit LAN, and 7.1 surround sound. There are also many USB ports, including USB-C and USB 3.2 Gen2. If you want to add a fast NVMe SSD, there are two M.2 slots available. One supports PCIe Gen 4 x 4, while the other supports PCIe Gen3 x 2 and SATA3 mode. There’s no Wi-Fi, but it’s not surprising at this price-point.

The Asus TUF Gaming B550M-Plus Wi-Fi sits at the top of the TUF Gaming B550 range offers a brilliant mix of price and performance. The TUF range has moved towards entry-level gaming, but it still uses durable components. This motherboard features a 10-phase VRM shielded under a massive heatsink. It also has two M.2 slots, with one of them able to handle the latest PCIe 4.0 NVME SSDs. Despite the affordable price, there’s even built-in Wi-Fi 6 and a 2.5-gigabit ethernet adapter.

One of the interesting features of this motherboard is the BIOS Flashback utility. It allows you to quickly restore a backup without needing memory or a CPU installed. The other standard equipment includes four four-pin fan headers, two regular RGB headers, and two addressable RGB headers. This motherboard won’t compete with the latest Z490 motherboards, but you’ll be able to play most games like VALORANT or Assassins Creed: Valhalla.

The Gigabyte B550 Aorus Pro is similar to the Aorus Master, buts it’s cheaper because it only has a 14-phase VRM compared to the Master’s 16-phases. It still boasts fantastic performance and efficiently delivers power to all the components on the motherboard. All the major parts have thermal protection with large heatsinks and an enormous shroud protecting the CPU.

The B550 Aorus Pro still features terrific build-quality and all the features you’d expect, like two M.2 slots with full heatsink coverage, three PCIe slots, and six SATA 6 ports. There’s also a Thunderbolt header, eight fan headers, and the RGB headers. The RGB lighting is controlled using Gigabyte Fusion, and you can sync it with your headset or lighting kit.

The MSI MPG B550I is the perfect choice if you’re looking for a compact B550 motherboard. This Mini-ITX motherboard will run the latest Ryzen chips smoothly and comes with two DDR 4 RAM slots and a 10-phase VRM. It also has one full-size PCIe slot and two M.2 slots. You won’t worry about network speed because the MPG B550i has both Wi-Fi 6 capability and a 2.5-gigabit LAN port.

Mini-ITX motherboards often have fewer features due to space constraints, but this one has respectable performance with most of the functions you need. The CPU backplate might not be compatible with some instances. There’s also no onboard RGB lighting, but that may please people going for a more subtle look.