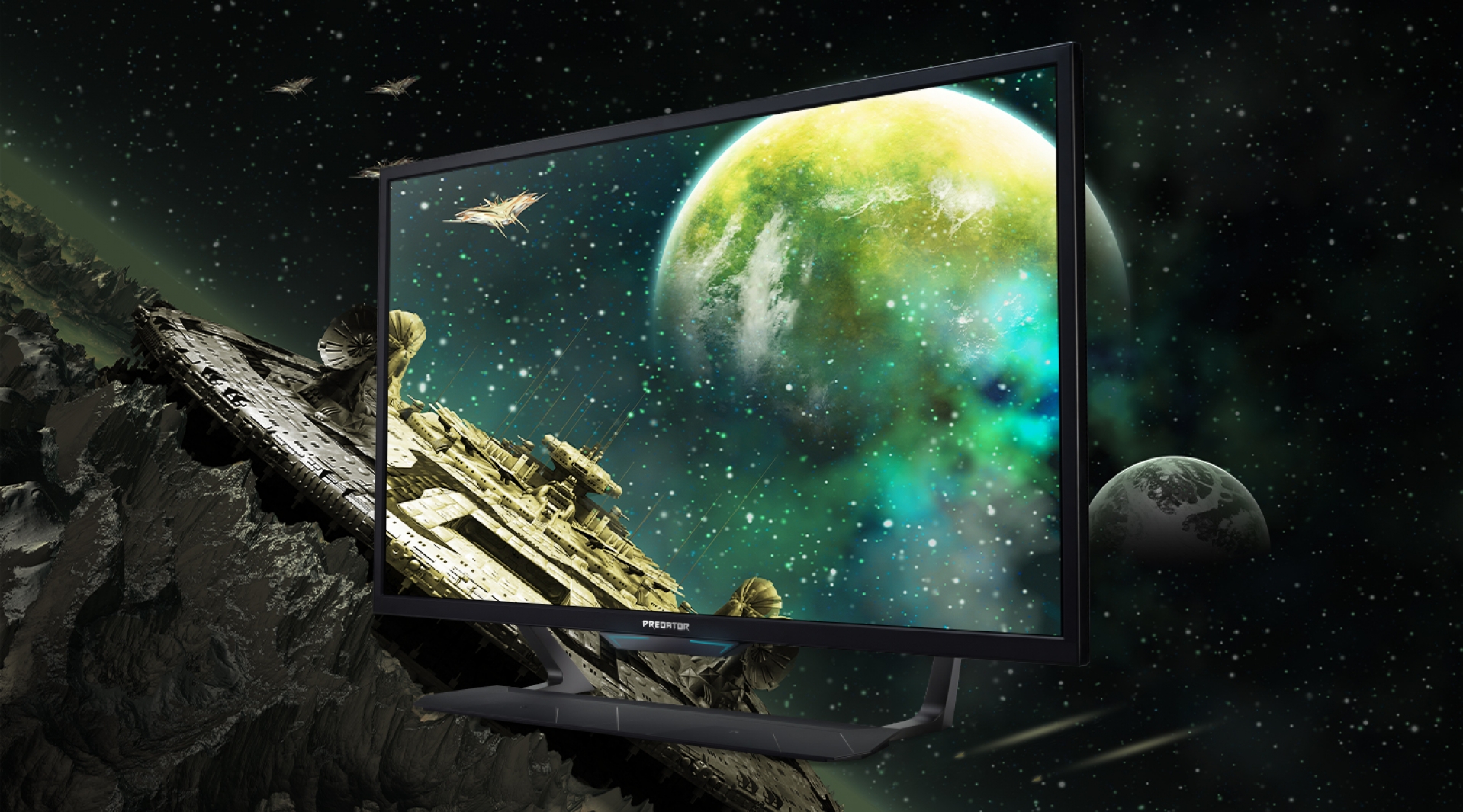 Gaming monitors differ from regular monitors because they need to be faster to handle intense graphics. They also have to have a low input delay in instantly sending the signal from your PC to the screen.

Most gaming monitors cater to speed but also need to have fantastic graphics. Pro gamers may sacrifice screen size and resolution for speed, but casual gamers appreciate a big screen with detailed graphics. Many modern gaming screens also feature FreeSync or G-Sync compatibility to sync their framerates with the graphics cards to eliminate screen tearing.

When it comes to gaming screens, Acer is a force to be reckoned with. The company was founded in Taiwan in 1976 and has grown into one of the world’s largest computer suppliers. In 2008 they established the Predator brand to focus on high-end gaming products.

Acer Predator monitors are some of the best in the business and push the envelope for performance and features. Below the Predator brand is the Nitro and AOpen brands that use Acer technology to make more affordable gaming products.

Here are the best Acer gaming monitors so you can see what they’re all about.

The Predator X27 isn’t the biggest gaming monitor in the Acer lineup, but it takes performance to another level. This 27-inch monitor is packed with everything a gamer could want, like 4K UHD (3840 x 2160) resolution and a 144Hz refresh rate. It uses an IPS panel with 384 backlit zones and 1,000 nits peak brightness. There’s also HDR and Adobe RGB color to ensure a vibrant and crisp display.

This monitor has G-Sync to prevent screen tearing and a 4ms response time. You only get a single HDMI 2.0 port, a Displayport 1.4, and two USB ports. The sound is courtesy of two seven-watt speakers. Everything about this monitor is top-notch, including the build-quality. It’s a bit thicker than other monitors, but it still looks fantastic with angled aluminum legs and a hood around the screen. All this incredible performance doesn’t come cheap, but it’s worth it if you have the hardware to run it.

The Predator CG7 is a massive monitor with outstanding performance. The idea behind it is to take gamer-friendly features and pack them into a TV-sized monitor. The result is a 43-inch screen with 4K UHD resolution and VESA Display HDR certification. It also has a native refresh rate of 120Hz that can be overclocked to 144Hz. Other gamer-centric features include a 1ms response time and G-Sync compatibility.

This monitor also has two built-in 10-watt speakers and multiple ports, including three HDMI 2.0 ports, a DisplayPort, a USB-C port, and four USB Type-A ports. It also looks impressive with its sleek black design and enormous base. The CG7 comes with a remote control, but there’s no TV tuner. It’s one of the best options if you want to play on a big screen, but you have to pay the price.

The Predator X35 is an excellent choice if you prefer playing Call of Duty or Apex Legends on a curved screen. This 35-inch ultrawide monitor has a 21:9 aspect ratio and QHD 3440 x 1440 resolution. The VA panel has an incredible 512 local dimming zones and Quantum dot technology for excellent picture quality. This screen also has G-Sync technology to eliminate screen tearing and an impressive 2ms GtG response time. Its native refresh rate is 180Hz, but you can overclock it to 200Hz.

Just like the other monitors we’ve mentioned, the X53 has HDR10 support and VESA DisplayHDR1000 certification. The sound comes from two 4-watt speakers, but you’ll probably want to use a headset or external speakers. You also get a single HDMI port, a DisplayPort, and four USB ports. The Predator X35 has stylish looks with thin bezels and distinctive legs. It may be pricey, but it offers an exceptional gaming experience.

The Predator XB1 is all about speed. This 24-inch monitor uses a TN panel and has full HD 1920 x 1080 resolution. Where it stands out is the blistering 144Hz refresh rate that can be overclocked to 180Hz and the 1ms response time. It also has G-Sync functionality to sync with your Nvidia graphics card. You get less screen tearing and better clarity when your GPU’s refresh rate matches your monitor’s refresh rate.

The connectivity options on this monitor are limited to an HDMI 1.4 port and a single 1.2 DisplayPort. There’s no USB hub like many rivals, but it has two 2-watt speakers built-in. As expected, the sound quality isn’t fantastic, but you’ll probably only use it as a backup to your headset. Overall, this monitor is perfect for people who want the edge in VALORANT or CS:GO because of its outstanding speed.

The Acer Nitro XV272U is an excellent monitor and comes with Freesync compatibility. The Nitro monitors don’t get as much attention as the Predator range but still have impressive performance. The XV272U uses an IPS panel and has a 27-inch screen with WQHD 2560 x 1440 resolution. It only has Display HDR 400 functionality, but in this price range, it’s acceptable.

Unlike the other monitors on this list, there’s no G-Sync compatibility, and instead, there’s AMD Freesync. Where it excels is the 1ms response time and great 144Hz refresh rate. This monitor doesn’t stand out and looks like a regular office monitor. It still has excellent functionality and can pivot 90-degrees and swivel 360-degrees. The XV272U comes at a reasonable price and still manages to have crisp and clear picture quality.

AOpen is considered Acer’s budget brand and offers affordable products with brilliant value. The AOpen 25MH1Q is one of the best options if you want a gaming monitor on a limited budget. This 24.5-inch monitor may be inexpensive, but it still offers features like full HD 1920 x 1080 resolution and Freesync compatibility. The TN panel helps to keep the price down and also allows it to have faster speeds.

It has a native refresh rate of 144Hz and a quick response time of 1ms, making it ideal for games like Fortnite or Overwatch. The 25MH1Q has an understated look with slim bezels on three sides and a small red logo on the stand. It’s one of the best options if you want superb performance without paying much.

The AOpen 27HC5R is another reasonably-priced gaming monitor with a curved screen. It features a 27-inch screen with a 16:9 aspect ratio and full HD 1920 x 1080 resolution. It also has a mammoth 165Hz refresh rate and a decent 5ms response time. There’s no need to worry about screen tearing because AMD Freesync is included.

The 27HC5R features a single DisplayPort, two HDMI ports, and there are also two 3-watt speakers. It uses a frameless design like the 25MH1Q and can tilt between 14 to 18 degrees for a better viewing angle. This curved monitor has excellent speed and great picture quality without costing a fortune.