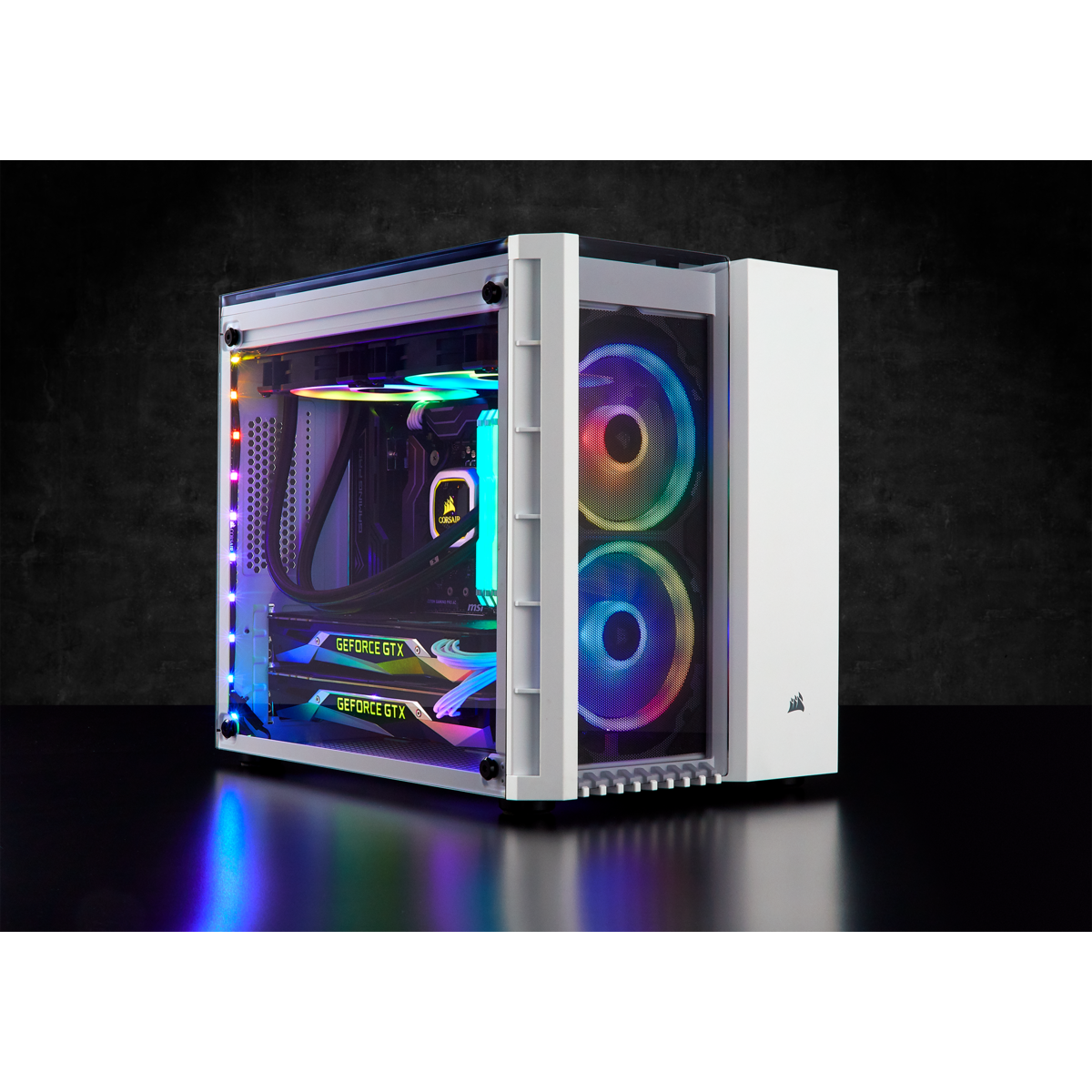 With the gaming community trending towards a streamlined setup, mini-ITX builds have become increasingly more popular over recent years.

An ITX motherboard is much smaller than a regular-sized one, allowing for the setup to be built more compact. While they do have their downsides, such as the limited compatible parts compared to a traditional sized build, mini-ITX cases will not only save space but also save money as they tend to be a cheaper alternative to the traditional option.

There are many casing options on the market for ITX builds, and these are some of the best available options.

Any gamer building their setup wants it to look and feel like a capable gaming machine. Luckily, the compact design of mini-ITX builds doesn’t mean it can’t look like an impressive gaming machine.

The Corsair 280X will put the system on full display, boasting three tempered glass panels and RGB lighting. While the case might be slightly larger than many of the other mini-ITX options since it was built to support both micro-ATX and mini-ITX builds, the unit itself is still small but with some extra space to ensure a tidy appearance inside the case.

The dual-chamber internal layout allows for components to be tucked away from the side view of the case, hiding away the not-so-impressive-looking parts such as the power supply and storage drives, while the motherboard, graphics card(s), fans, and CPU cooler remain on full view.

One of the biggest issues that can occur when choosing to use a mini-ITX case is that the unit will heat up due to the small space between all the components. This is not an issue in the case of the Corsair 280X as it has a trademarked Direct Airflow path cooling, seeing the case be optimized to ensure air flows past the hottest components.

If you’re after a case that will look much like its traditional counterparts, the NZXT H210i is the case for you. This case offers all the features that are available over the H Series range of NZXT’s cases. Due to its sleek appearance, it looks like it belongs right next to the rest of the line.

Appearance is still at the forefront for many who chose to go the route of mini-ITX and this case has unique additions to ensure your build is as clean as it possibly can be. Cable management has never been easier with the NZXT signature cable management bar. Hiding away undesirable components such as power supplies and storage drives is made easy with the covered power supply compartment at the bottom of the case and the SSD clips that will be hidden away on the back behind your motherboard.

Cooling is no issue in this case with three fan mount locations on the front of the case and removable filters on the front grill and power supply ensuring no dust or dirt makes its way into your build.

A1 Plus mini-ITX Tower

RGB lighting has become more popular over time and the A1 Plus makes that feature one of its main priorities. With RGB lighting integrated into both the units base and its two included fans, this case has aesthetic at the core of its design. The square design of the case allows for easy access and makes installing components a hassle-free process.

While the unit may otherwise seem like a standard casing option, it is equipped with some other unique features that aren’t offered in a lot of the bases available today, such as a wireless charging panel on the top of the case. This allows the user to recharge all their compatible wireless charging devices while they remain at their PC.

If you are looking for something eye-catching this is a fantastic option that should be considered.

One of the things that make mini-ITX builds so enticing is their versatility. A case such as the MasterCase H100 can be used as a streamlined gaming rig or a living room streaming PC due to its compact design.

While this case may look tiny, it allows for ATX power supplies to be used so that it can improve hardware compatibility and ensure efficient power is provided around the case. With a built-in handle on the top, the case is portable and easily moved or taken with the player should they chose to attend a gaming event such as a LAN. This case also caters to both SSD and HDD storage drives with mountable locations for both being located in the back of the case.

This case is perfect for the competitive player who is looking for a small lightweight portable setup to bring with them wherever they are required to train or compete without sacrificing in performance.

It doesn’t get more portable than the 380T. This case doesn’t hold back when displaying its intended use, boasting a handle in the center of the top of the case as well as a curved design as opposed to the common flat design that can be seen in many of the cases available.

The industrial look of the case doesn’t take away from its capabilities. The case can easier fit many high-end components including an extra-long graphics card. Accessing the components has never been easier with three liftable side panels revealing the interior of the case. This allows the player to customize their setup with ease or fix issues that may arise on the fly. Cooling is of no concern in this build as it includes five different fan mounts and a three-speed controller.

While it may look like an odd choice, this case excels due to its clever use of design to maximize size enabling it to suit full-size GPUs and PSUs that many other mini-ITX cases just aren’t capable of.