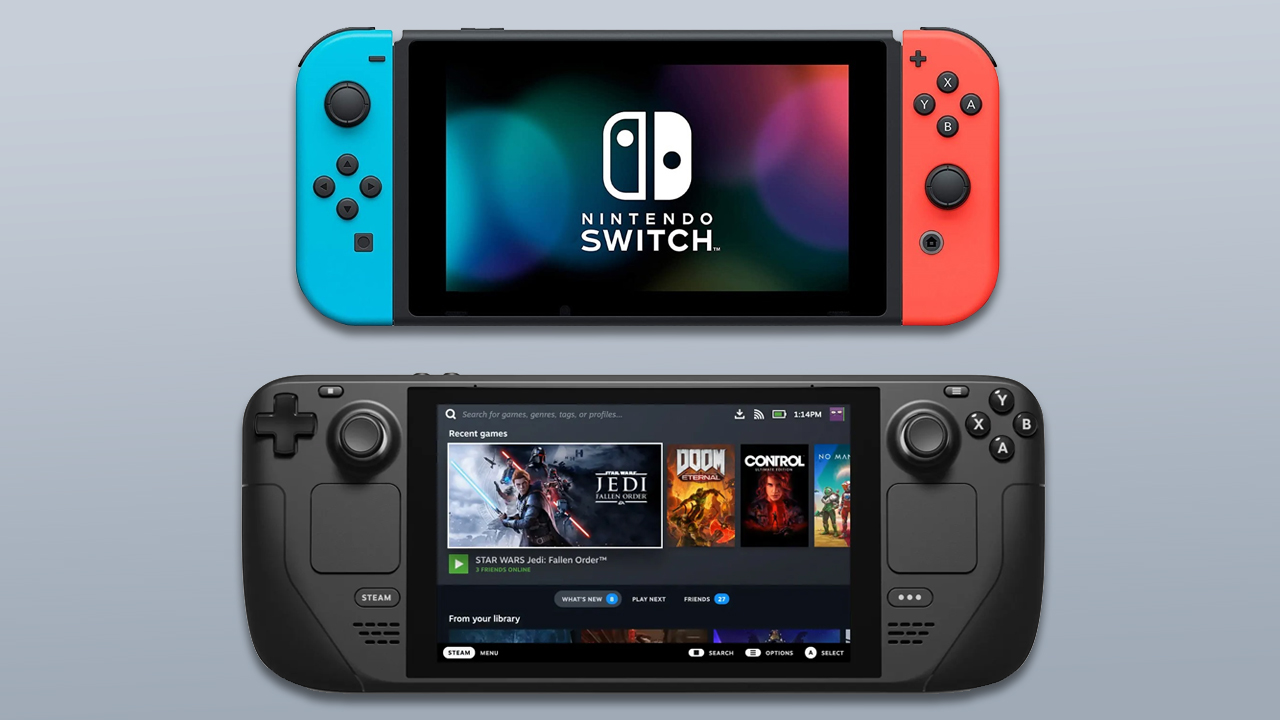 On July 15, Valve shocked the gaming community with the surprise announcement of its gaming handheld, the Steam Deck—a compact gaming machine that aims to let players access AAA PC titles and their entire Steam libraries on the go for just a fraction of the price of a gaming PC.

For many, it seemed too good to be true. As more hands-on content surfaces with the device, however, it seems true enough to be good. With superior power, a more expansive library of games, and the ability for general computer browsing, the Steam Deck seems poised to take over the handled gaming market, even from the likes of its most influential innovator, Nintendo.

Beginning with the Game Boy in 1989, Nintendo has remained relatively untouched in the market and consistently released upgraded products up to the current, industry-leading handheld, the Nintendo Switch. But can a new contender emerging in the handheld gaming space shake up the tight grip that Nintendo has held over the space for the last two decades?

The two devices boast a similar design, with a large display in the center of their controls, triggers, a touch screen, and docking capabilities. But how do the two compare? And should Nintendo worry about its position as the leader in gaming handhelds as the new challenger approaches?

To answer these questions, we’ll be breaking down some of the key differences between these two devices to draw an early conclusion of whether the Steam Deck can impact Nintendo’s market share when it launches in 2022.

You’ll notice several glaring similarities immediately upon seeing the two hybrid consoles side-by-side. The design on both of these devices aims to provide as much screen real estate as possible while keeping them portable and creating a comfortable position for the controls to make them fit users’ hands.

The Nintendo Switch may have recently received a slight update with its OLED model that will launch on Oct. 8, but its overall design has remained the same. With a detachable set of Joy-Cons on either side, a kickstand on the back, and its screen in the middle, the Switch caters both to those playing alone and to anyone who wants to easily share the gaming action with nearby friends.

The Steam Deck, on the other hand, looks more closely targeted to servicing a single gamer with its thicker handles, touchpads on either side, and larger, sturdier triggers.

Thanks to the USB-C port at the top of the console, users can connect external devices such as controllers. However, there aren’t any reports regarding the effectiveness of playing local multiplayer on the device as of yet.

When it comes to screen real estate, the Steam Deck boasts a larger seven-inch display. Although the regular Switch has a smaller 6.2-inch display, the Switch OLED has the same screen size as Valve’s handheld at seven inches.

The Steam Deck is the bigger and sturdier of the two devices, but it doesn’t offer the multiplayer accessibility that the Switch does right out of the box. Instead, it requires external peripherals to match that capacity.

The Steam Deck is the larger of the two consoles, and when looking at the components it houses, it shouldn’t really be a surprise why.

Weighing over twice as much as the Nintendo Switch, this goliath is outfitted with a custom AMD APU Zen 2 processor, 16GB of ram, options of between 64, 256, and 512GB of internal SSD storage, a seven-inch 1280×800 resolution screen, and early reports of between two and eight hours of battery life.

The Switch boasts a smaller form and weighs substantially less, making it more portable. It has an Nvidia custom Tegra processor, 4GB of ram, 32GB of internal storage, an HDMI output built into the dock, a 6.2-inch 720p screen, and an average battery life of up to six and a half hours.

Although the Switch is clearly outmatched when it comes to technical specifications, it is also priced at just $299.99, while the Steam Deck will cost between $399 and $549 depending on the storage size. The Steam Deck’s prices are still quite reasonable given its capabilities, however.

With the Nintendo Switch, you know exactly what you’re getting when it comes to the user interface. Its UI has remained mostly unchanged since release and likely won’t see changes until a new console takes its place in Nintendo’s line of handhelds. With an easy-to-navigate block-style menu, there should be no issues picking the device up and getting started on your gaming adventure.

Breaking down the Steam Deck is slightly more tricky. While it does run a Linux-based version of SteamOS, since it is essentially a PC on its own, Valve has revealed you could potentially boot any operating system of your choice to optimize the user experience to your liking. This is perfect for tech enthusiasts who want to dive in and tinker with everything the Steam Deck has to offer. For those just looking to pick up a few games, though, the SteamOS provides your collection in an easy-to-navigate fashion, with the store just a click away.

Comparing the User Interfaces for these two devices comes down to preference. They’re both simple to use, and although the Switch’s UI is slightly easier to understand, there are undoubtedly more customization options available on the Steam Deck.

It is hard to come to a clear conclusion on the performance capabilities of the Steam Deck since it hasn’t been available to consumers as of yet. Thanks to test footage, however, we have seen it in action with some games—and, unsurprisingly, it performs well.

While it may be limited in its capabilities due to its smaller screen, the Steam Deck can run many games at smooth 60fps and 720p with some optimization tinkering. We’ll get a better look at the pros and cons of the device once it is widely available. For now, however, the perspective is positive.

The Nintendo Switch performs flawlessly since it only exists within the Nintendo ecosystem. The Switch won’t struggle to perform with many games because the only ports that make it to the console are approved and optimized for it. That being said, the Switch can only support up to 720p, 30fps in handheld, with some titles receiving a bump to 1080p or 60fps while docked.

While the Steam Deck does include a docking mode, it doesn’t offer the same boosts that the Switch’s does. The performance on the Valve handheld is unquestionably more powerful, however.

Both handhelds have built-in controls on the sides of the device. In the Switch’s case, these can be removed to make one or two controllers for use wirelessly. Where these two devices both shine the brightest controller-wise, though, is through the external devices that players can connect.

The Nintendo Switch has a wide range of different controllers, both wired and wireless, that can be used to play while docked. Some of the best include the Pro Controller line, which has been perfectly optimized for the system, or the third-party Split Pad Pro, which can provide the Joycon experience while handheld.

Despite the Switch’s huge range of accessories, the Steam Deck blows it out of the water in this category. Being a PC, it can use pretty much any keyboard, mouse, or controller connected via its USB-C port or wirelessly through Bluetooth.

The most important category in this comparison: the games. If you’re buying a gaming handheld, then you’re likely looking to get the most play out of it, and both of these devices do an exceptional job of that—with their obvious differences.

Valve’s Steam Deck can access pretty much any game that a regular PC can, though storage could be an issue on the lower-spec versions. But this doesn’t mean that they will all work or perform well on the device. The best games to play on the handheld are going to be those available in Valve’s Steam marketplace. Like other categories on this list, however, the user can optimize their device to support other titles.

As is tradition, the Nintendo Switch can only run games released by Nintendo through either physical sales or on its digital marketplace. While this does mean no third-party games, there isn’t a huge problem on that matter. Nintendo already has a massive library of titles, with a game for every type of consumer, and many of the console’s biggest hits are available exclusively on the Nintendo Switch. For many people, this will be the deciding factor to select one device over the other.

Is Nintendo in trouble?

The short answer is no. Nintendo has always had competition and has pulled through in those scenarios. Let’s not forget Sony’s attempts with the PSP and PSP Vita—both technically superior consoles, but couldn’t surpass Nintendo’s library of beloved first-party exclusives.

Valve’s Steam Deck does a lot well, and it will likely be the better device for most hardcore gamers. That’s precisely its point. The audience that Nintendo targets—and has continued to capture for more than 20 years—isn’t the hardcore gaming community. Instead, it finds a spot for casual and family audiences. Valve’s Steam Deck isn’t the device for these kinds of gamers, nor is Valve marketing it towards them.

With its campaign, Valve has been attempting to position the Steam Deck as not only the next big gaming handheld, but also, for a lot of people, their next PC, and the mission doesn’t collide with Nintendo’s niche. For that reason, they can both coexist.

The one caveat to this is that emulation could potentially cause a massive problem for the Nintendo Switch if a solid emulator is crafted for the Steam Deck. Piracy, however, is a larger issue.