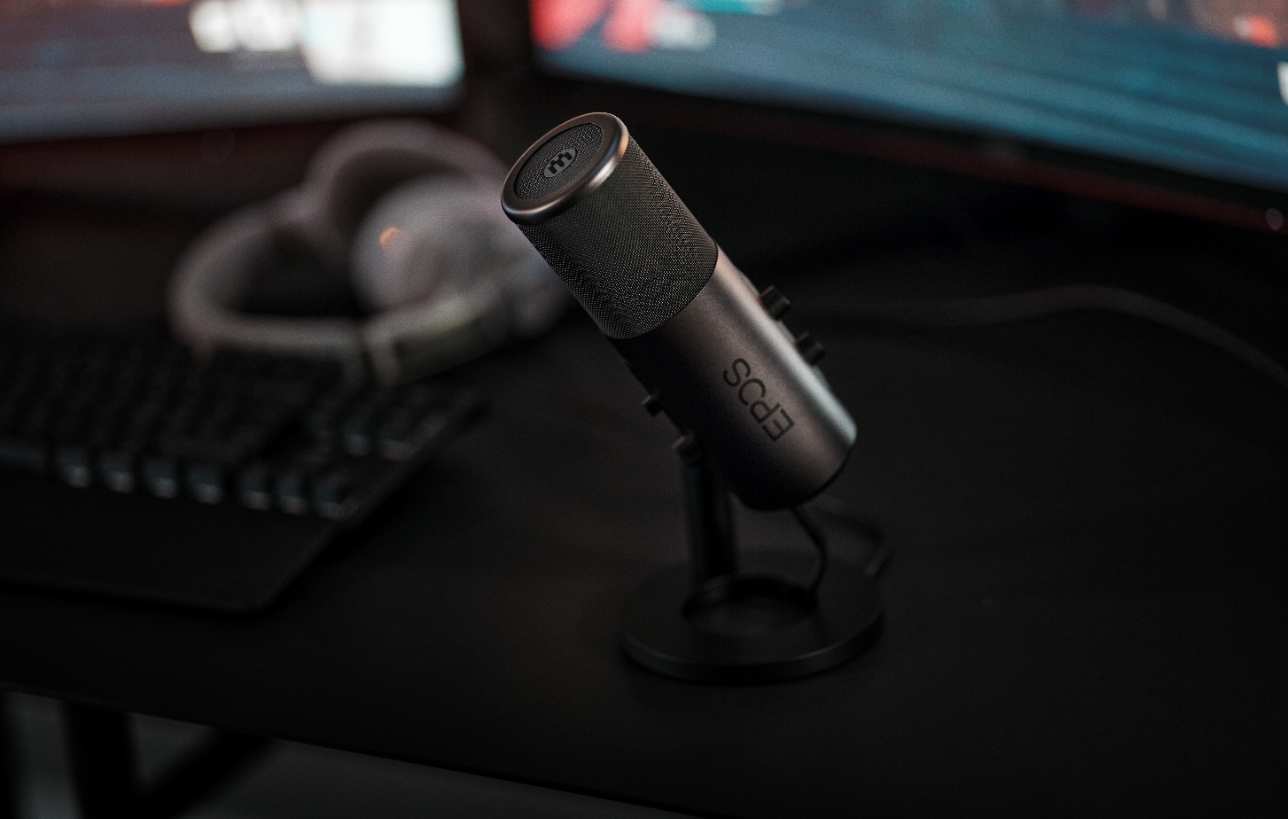 After splitting from Sennheiser in 2020, EPOS has continued to release high-end gaming audio solutions. The brand is striving to maintain the high watermark set under the Sennheiser umbrella. While EPOS’ products are relatively pricey compared to competitors’, the company has a knack for balancing clean designs and quality audio. EPOS brings this balanced formula to its newest release, the B20 microphone.

The B20 sticks out in a crowded mic market thanks to its decidedly premium design, flexibility, and bright sound, but the software doesn’t rise to the occasion.

EPOS’ B20 is a plug-and-play USB condenser microphone with plenty of onboard controls to dial in your desired experience. A large part of the B20’s appeal is its swappable polar patterns, but EPOS gives users a bit more flexibility with a mute toggle, gain knob, headphone jack, and volume knob.

The ability to switch between polar patterns adds significant value to this microphone and is the main reason why its high price is somewhat justified. Using this mic for various tasks, from gaming and streaming to podcast recording in the round, makes the B20 a multifaceted product that’s ready for nearly everything.

Aside from the polar pattern control, the B20’s mute toggle, volume knob, and gain control are all welcome additions. Everything here is straightforward, but users should watch their gain level since cranking your gain introduces a healthy amount of background noise into the mix. The mute function is sleek considering it’s only a mute toggle. The thin, vertical white light changes to red once muted, and it plays well with the gunmetal finish.

The B20 is also compatible with 3/8-inch threaded boom arm connections. While the included desk stand is a sturdy and reliable option, those with less desk space can easily connect the mic to their arm of choice. Just be sure to double-check the threading on the arm or make sure it comes with an adapter.

Thanks to EPOS’ inclusion of a USB-C connection, connecting the mic is fool-proof. It’s pretty difficult to mess up plugging in a USB cable, but we’ve all done the Micro-USB dance, and it’s getting old now that USB-C has been around for some years.

A selling point of the B20 is its mature design. EPOS nails the aesthetics of its products, and the B20 showcases this perfectly. Sleek, sturdy, and lightweight, the B20 has it going on. Every control knob, line, and detail looks purposeful and user-friendly.

The simple design of the B20 allows it to fit in any setup with ease. Thanks to the subtle gunmetal finish and unassuming cylindrical shape, the B20 doesn’t pull attention in the way something like the brightly lit HyperX QuadCast S does. Its flair is limited to the mute indicator light, the EPOS logo on the right side, and a small EPOS badge on the top of the microphone.

The included stand isn’t quite a selling point, but it does take the cake over similar products like the QuadCast S. EPOS attaches a small arm to the mic that connects to the base of the stand. This allows the mic to tilt well past 180 degrees in both directions, though you might not want to do that if you value the life of the included USB-C cable since it can get snagged while tilting the mic.

EPOS’ flat, circular stand base has a wide notch at the rear for the cable to slip through. Most stands include some feature that feeds the cable back but is particularly clean. The wider notch is also useful when plugging in headphones to monitor sidetone since it prevents cables from catching on each other.

Comparing out-of-the-box sound to the HyperX QuadCast S, which also features on-the-fly polar pattern switching, is where things get a little more complicated. After spending time with each of these microphones, the QuadCast S has a decidedly warmer, bass-heavy sound.

The B20 does a fine job of providing slightly brighter input in its stock form but introduces a pinch of sibilance at times. Sibilance is a slight harshness on sounds like S or Z. Being sibilant isn’t an inherent quality of the mic, and users can avoid this by positioning the mic a little further away from their mouths and at a slight angle. After sorting out the positioning, the mic retained its bright characteristics.

Users can dial in the B20 further with EPOS Gaming Suite software, but it isn’t reliable. EPOS’ software rarely cooperates and can be a bit of a pain to get working. Once it’s up and running, users are free to adjust the noise gate, audio enhancements, EQ, and more. The additional software is a nice touch that adds an extra bit of value, but it worked poorly and had to be uninstalled and reinstalled several times during the review process.

Each polar pattern provides a distinct sound that works for specific scenarios. Cardioid often sounds the clearest and brightest. Stereo has a surprisingly natural tone, but omnidirectional is the most natural-sounding and takes on the room’s qualities. Bidirectional has a warm but congested feel. Every pattern aside from cardioid will likely introduce more noise from your surroundings when not used appropriately.

Microphones offering several polar patterns are best suited for users engaging in activities beyond gaming. Things like podcasting or recording with a buddy are where much of this mic’s value is held. The QuadCast S found itself in a similar boat but costs a bit less than the B20.

EPOS’ B20 is the pinnacle of design. The microphone avoids the intense gamer aesthetic of HyperX’s QuadCast S and provides a similar but brighter performance. Everything from the stand to the mute button brings a considerable amount of class to most setups.

Some users might prefer something warmer out of the box, but they’re free to customize the B20 in the EPOS software if it cooperates. Being slightly brighter isn’t an inherently negative quality, but it isn’t our reviewer’s personal preference. There is a warm preset in the software, but it had little impact on the microphone.

If you’re in the market for a feature-packed desktop microphone with a sleek design, the EPOS B20 does a convincing job of justifying its price. Just don’t expect the software to do you any favors.