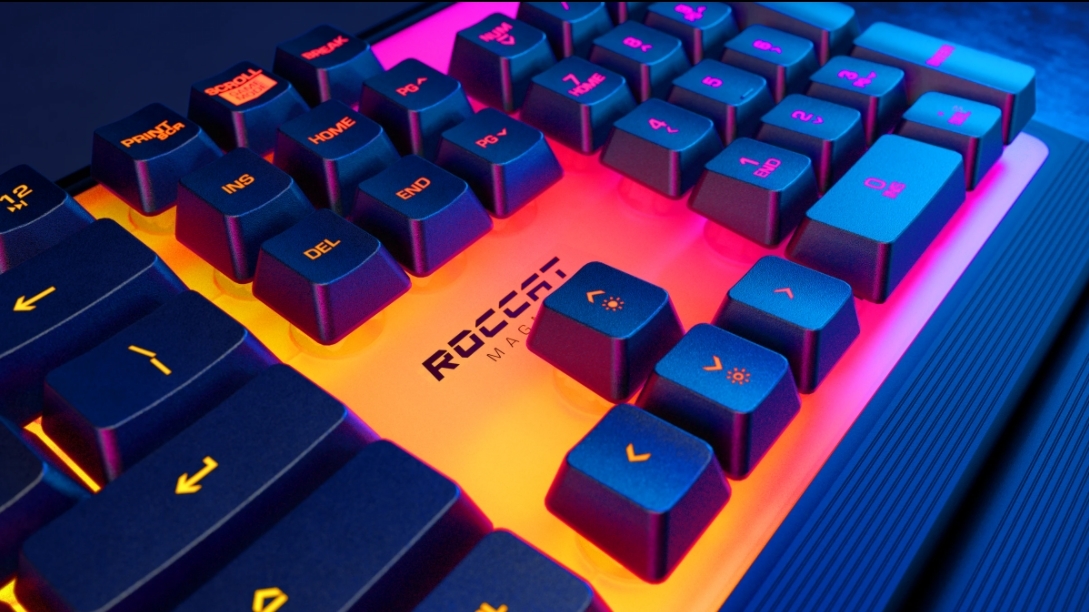 Gaming keyboards are one of the more personal purchases a gamer can make. Everything from the switch type to the keycap material makes a difference. Because of these strong preferences, many players disregard membrane as a competitive option. Every once in a while, though, a membrane keyboard comes along and tries its best to make a good impression. ROCCAT’s Magma board is one of those products.

The Magma keyboard knows it isn’t competing with mechanical keyboards, and its design helps highlight the strengths of membrane keyboards.

ROCCAT’s Magma keyboard design is one of the most eye-catching designs our reviewer has seen all year. Nothing comes close to touching the aesthetics of the semi-transparent plastic plate. With the five-zone RGB backlighting blasting from behind the keys, this keyboard is as flashy as they come.

While the translucent plate is the Magma’s biggest strength, it’s also its biggest structural weakness. The only major concern about this board is the flex in the plate. Because the case and plate are both made of plastic, the Magma lacks a sturdy backbone. Pressing anywhere on the plate causes some creaking and slightly separates the plate from the case. Membrane keyboards aren’t known for their durability, so this didn’t come as too big of a shock. But if you slam your keys, this one might not be for you.

A nitpick regarding the translucent plate is that some of the standoffs are visible through the plate. It isn’t a performance issue, but it does become bothersome considering the amount of flex in the keyboard.

Our reviewer was pleasantly surprised by how responsive the Magma was. There was never an instance where they felt let down by the membrane keys. ROCCAT also includes anti-ghosting to help this keyboard keep up the pace without stumbling over missed inputs. The membrane keys maintained consistency over many matches without any issue, and the silence was quite enjoyable.

One of the main reasons to consider this keyboard is if you need something on the quiet side. Mechanical keyboards can be disruptive if you’re living with roommates or family. Silent mechanical switches use the term “silent” in a relative sense and often still produce a fair amount of noise. The Magma’s membrane keys are a better option if you’re looking for a silent keyboard that won’t wake the neighbors.

I really don’t want to clean this

The Magma comes with a grooved detachable wrist rest, adding stress if you’re a neat freak like our reviewer. Having a wrist rest is inherently good, but the grooved design of the Magma’s wrist rest gets dirty in practically no time at all. Anything and everything will find its way into the grooves of the wrist wrest: dust, lint, you name it. While this won’t be an issue for every user, it’s something to consider if you’re someone that likes to keep their battle station prim and proper.

Another surprising feature at this price point is the flip-up feet. Having adjustable feet is a common feature in keyboards $100 and up, so seeing this feature on a membrane board that’s well under the hundred-dollar mark presents some additional value. As always, it’d be better to have two layers of adjustable feet, but given the low price, our reviewer can’t complain.

ROCCAT’s Magma membrane keyboard boasts an eye-popping design that sets it apart from competitors. While it’s still a membrane keyboard, it does perform surprisingly well in competitive titles. Whether that performance will last will likely vary on a case-by-case basis.

If you’re on a budget and in the market for a silent keyboard that won’t wake the neighbors, ROCCAT’s Magma board is worth the minimal investment despite durability concerns.