Used by the likes of Dr Disrespect, Roccat’s Kone Pro mouse has found favor with many gamers. Now, the company is taking its unique design language and upping the RGB ante with the Kone XP.

Roccat’s new Kone XP design preserves the shape and performance of the original while adding more functionality and a wealth of RGB lighting. What sets the Kone XP apart from its lower-key siblings is its creative use of RGB both in the shell and the scroll wheel. Roccat has implemented RGB throughout the top shell on both black and white colorways. The company loads the Kone XP with 22 individual LEDs, calling it 3D RGB. But then Roccat goes a step further with their lighting on this model by way of the Krystal 4D scroll wheel, which uses a smoky tint to diffuse the programmed RGB. If it sounds like a lot of RGB, it’s because it is. 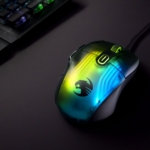 Another major step away from the original Kone Pro formula is the amount of buttons players have access to on the Kone XP. Instead of the traditional five to six button design, the Kone XP boasts six side buttons that can take the total count up to 15 with the help of its Easy-Shift[+] function. Roccat clearly accounted for and targeted MMO RPG players with the Kone XP.

Aside from the new visual and functionality tweaks, Kone fans can also expect the return of Roccat’s Owl-Eye sensor, Titan optical switches, its pliable PhantomFlex cable, and heat-treated PFTE mouse feet for industry-standard performance. All of these features went a long way in providing a comfortable experience on the previously released Kone Pro Air, which only suffered due to its connectivity issues.

The Kone XP is available for pre-order on Roccat’s official store for $89.99, which is $10 above the base cost of the standard Kone Pro but well beneath the wireless Kone Pro Air. Roccat’s Kone XP begins shipping March 29.