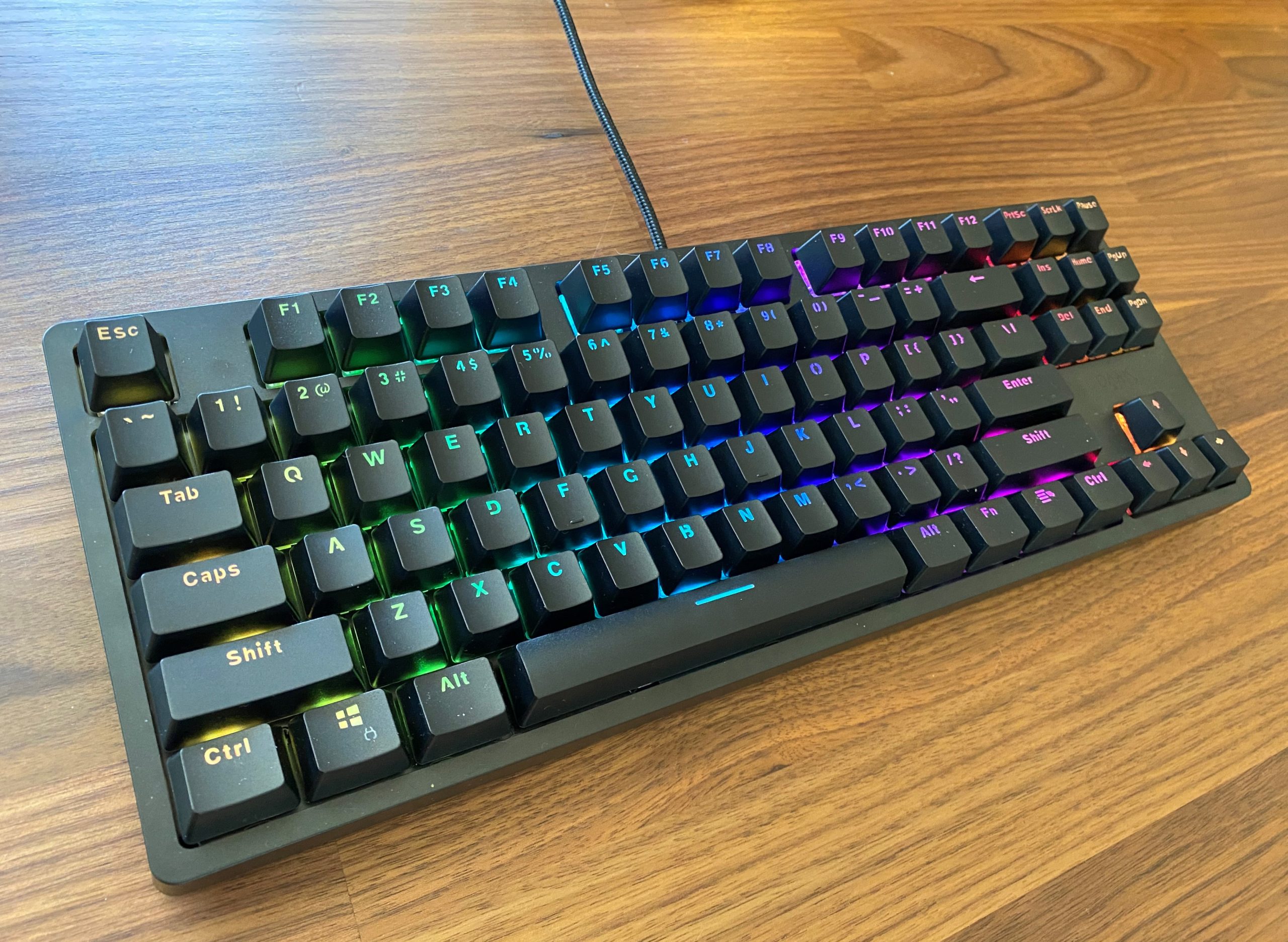 Monoprice has been in the consumer electronics business since 2002. The company supplies customers with everything from ethernet cables to headphones and gaming peripherals. In June, Monoprice launched Dark Matter, its new gaming peripheral division. The Collider TKL keyboard is Dark Matter’s attempt to break into the competitive tenkeyless market.

Dark Matter’s Collider TKL is a reliable but plain keyboard. The Collider TKL seems worth its mid-range price tag at one moment, and the next, it doesn’t.

The Collider is a standard plug-and-play TKL keyboard, and its simplicity works to its benefit. Given Monoprice’s focus on providing high-quality tech for less, it tracks that its gaming division would do the same.

Dark Matter’s Collider TKL is unique in that its first impression sticks throughout the entire experience. At first glance, there’s nothing left up for interpretation and the keyboard never really surprises in any meaningful way. This is a standard black keyboard with an ABS case, steel plate, and light branding above the arrow key cluster. It’s a sturdy build, but HyperX’s similarly-priced Alloy Origins Core line of fully aluminum keyboards outclass it. The RGB lighting carries most of the visual pizazz. If you’re not into RGB, what you see is what you get.

For those interested in RGB and macro recording, the Collider features onboard customization and dedicated software. Customizing RGB on the fly with a couple of key combinations is convenient and takes little time to master. Using onboard controls is often easier than using the software for some users. Generally speaking, recording macros can be a pain if you’re new to the process. The software used to customize macros is simple and looks a little rough around the edges, with the font looking particularly suspect. For around $100, the software should look far more presentable considering the appearance of the Hyper-K Ultralight mouse’s software.

Something wicked this way pings

The simplicity of its design makes the Collider resemble any number of keyboards, but it shares the most characteristics with Logitech G’s Pro X TKL. Dark Matter’s Collider mirrors some unfortunate similarities of the Pro X keyboard but one-ups it in other areas.

Hitting the Collider’s spacebar produces a sound similar to the Logitech G Pro X’s metallic pinging noise. This type of pinging noise isn’t uncommon, but it’s a little disappointing to hear if you’ve spent close to $100. Even when using a deskpad to absorb some sound, the pinging is still pronounced.

It’s not all bad, though. Compared to Logitech G’s Pro X noise, there is a significant lack of rattle to the Collider stabilizers. Dark Matter’s Collider is much quieter and has far less rattle than the more expensive G Pro X, making the pinging somewhat forgivable.

But how does it handle?

Dark Matter ships the Collider TKL in four different Cherry MX switch options, including Blues, Browns, Reds, and Speed Silvers. Our review unit came loaded with Speed Silvers. These switches have a 1.2-millimeter actuation point and take 45 grams of force to operate, making them a light and responsive linear switch.

In terms of performance, the Speed Silvers provide an unforgivingly fast experience. Prepare for a few fat fingers here and there if you’ve never used Speed Silvers or an optical switch before. Both switch types are essentially hair triggers that take little to no effort to actuate. The initial learning curve of these switches can take a few matches to get used to, but the Speed Silvers end up feeling effortlessly reactive.

The stabilizers also play a large role in creating a consistent experience and serve as a prime example of why Monoprice’s Dark Matter brand is worth a look. We’ve already touched on how the spacebar stabilizer is superior to Logitech’s, but it isn’t just the spacebar.

Few keyboards have stock stabilizers that feel like they belong to the same board. A recent example of how rough stabilizers can feel and sound is the Razer BlackWidow V3 Mini. Each stabilizer feels like it belongs on a separate keyboard. Conversely, each stabilizer on the Collider has a similar sound, feel, and slight wobble. There’s a sense of cohesion you don’t get with many keyboards out there, not even with a HyperX.

Despite missing out on an aluminum case, the Collider has a couple of small selling points that help give it legs in the long run. Features like a detachable USB-C cable and double-shot PBT keycaps provide a premium feel to an otherwise middle-of-the-road keyboard.

Dark Matter providing users with a detachable USB-C cable at this price point is a smart and necessary move in 2021. The recessed USB port is in the middle of the keyboard, allowing the user some wiggle room regarding which side they place their PC. Unfortunately, the notched design around the connector takes away from the convenience of a USB-C cable by only allowing the user to plug it in one way.

Having double-shot PBT is a big win for the Collider since they tend to be more durable and prevent oil buildup. These keycaps have a high-pitch bottom out to them that is exacerbated by the metallic pinging. Although the sound isn’t as pleasant as it could be, the texture of the keycaps is even and reminiscent of Razer’s PBT keycaps. Dark Matter’s keycaps aren’t as textured or thick, though.

Dark Matter’s Collider TKL provides a comfortable gaming experience and not much else. What you see is what you get with the Collider, and that works for and against it. Buyers get a no-frills gaming keyboard that doesn’t do anything wrong but doesn’t do much to impress aside from its stabilizers.

Including double-shot PBT keycaps, a single layer of flip-up feet, and a detachable USB-C cable are all wins but should also be considered the standard in 2021. Not all of the included features reach the benchmark, though. The flip-up feet only have one level, and the USB-C connector and port’s notched design eliminates the convenience of a USB-C connection.

Considering the pitfalls and price of the Collider TKL, it’s difficult to look at HyperX’s keyboards and not compare the two. You can get a fully aluminum HyperX Alloy Origins Core TKL with Red linear switches for $89.99 and sometimes $60 on sale. The Collider costs $99.99 on a regular day and $79.99 on sale. It essentially boils down to whether you enjoy a truly sturdy build or better stabilizers.