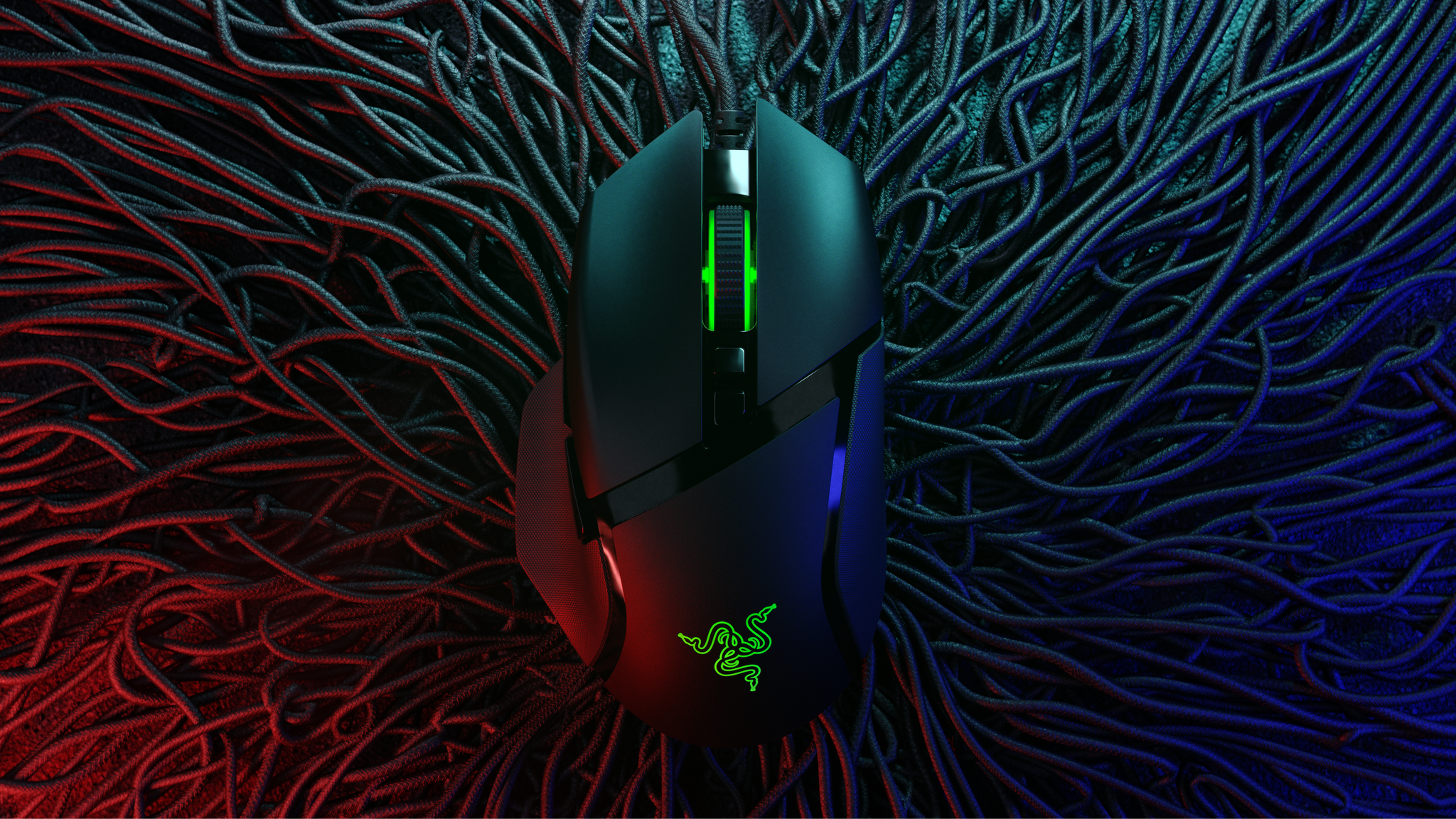 It’s no secret that Razer had a game-changing 2019. From the lightweight craze of the Viper to the wickedly responsive Huntsman TE, the company consistently upped the ante with an “anything you can do, I can do better” attitude.

The one-upping trend continues into 2020 with the Basilisk V2.

Razer’s latest addition to the gaming mouse market seems to be directly aimed at Logitech G502 users. The resemblance between the G502 and the Basilisk V2 is undeniable. Challenging one of Logitech’s most popular wired gaming mouse designs is a spicy way to enter 2020, and while the Basilisk Ultimate is just barely in the rearview, the V2 aims to be the more cost-conscious wired option.

While the Basilisk Ultimate is an undoubtedly great wireless option, the premium on wireless mice can be a bit too much for some buyers to stomach—and that’s fine. The V2 foregoes the wireless capability for the same Speedflex cable found on the Viper. For users who are weight conscious, the V2 also undercuts the Ultimate by a decent amount. The V2 comes in at 92 grams while the Ultimate weighs about 107 grams. Users who aren’t as weight-conscious are unlikely to notice any difference but it’s worth giving Razer credit where it’s due.

In keeping with challenging the G502, Razer gave the Basilisk V2 11 programmable buttons and a newly retooled ergonomic design that mirrors the G502. It’s actually a bit odd to look down at the mouse and realize that we aren’t handling a Logitech mouse, but there are two differentiating factors that present themselves immediately.

The first major difference is obviously the weight. The wired G502 weighs in at a sturdy 121 grams while the Basilisk V2 enters at 97 grams. This is a large difference when gaming and is further accentuated by Razer’s use of 100 percent PTFE mouse feet that help the mouse feel lighter on its feet.

The second big difference is the absence of Logitech’s Hyperscroll wheel. It’s an odd nitpick, but if you’re going to come for the crown, then you have to come correct—and this is a very narrow miss in our book. While the Basilisk V2 offers customizable scroll wheel resistance, it seems like a missed opportunity to give the user immediate control of this function. Instead, Razer allows the user to adjust the scroll wheel resistance on the bottom of the mouse. Again, it’s an extremely small thing to nitpick, but it’s really the only misstep Razer made in designing this mouse.

Moving on to the nuts and bolts of the Basilisk V2, Razer has updated the mouse to feature all of the usual trappings Razer fans have become accustomed to this past year. Razer has implemented its proprietary optical switches in lieu of the Omron mechs of gaming mice past. The change in switches also means the click rating gets a sizable bump from 50 million clicks to 70 million clicks, which is rather impressive considering most of us won’t be using a mouse for the full 50 million and beyond. Nevertheless, it’s good to have those extra 20 million in the bank for a rainy day of sorts.

Razer has updated the sensor on the Basilisk V2 to its current Focus+ 20K DPI optical sensor from the older version’s 5G 16K DPI optical sensor. Both are great sensors but the upgrade helps to justify the purchase of the redesign. Razer has given users a bit more flexibility in tuning its mouse via the Synapse software. Asymmetric Cut-off returns here and allows the user to set the distance at which the Basilisk V2 resumes tracking after it reaches its liftoff distance. We didn’t spend much time messing around with this setting since we found the mouse to be a solid performer out of the box. The Synapse software can admittedly be a bit frustrating to work with but allowing users to adjust and calibrate their mouse is a nice feature for those who want the most custom-tailored gaming experience possible.

The Basilisk V2 also boasts five programmable profiles, and while settings will save to the mouse outside of the Synapse software, lighting won’t follow if the software is closed. It’s a bit puzzling why Razer doesn’t allow for lighting to carry outside of Synapse given that the Basilisk V2 has onboard memory. We uninstalled and reinstalled Synapse and wiped our profiles from the V2 to try again, but the results were the same. It could be a software hiccup but the fact that this has been our experience with all the Razer peripherals boasting onboard memory we’ve tested leads us to believe that this is just the way Razer wants its software to work. It’s unfortunate and a bit annoying, but Razer is hardly alone in this department.

There’s a great deal of flexibility with the Basilisk V2, and while the same can be said of the Logitech G502, Razer’s option is clearly a product of the time and riffs on Logitech’s winning formula by one-upping Logitech in every department except the scroll wheel. We’re still huge fans of the G502, and while we find shape far more important than weight, the fact that Razer has lessened the weight and riffed on Logitech’s ergonomic design gives Razer the edge overall.

As always, any G502-like shape will be divisive in terms of comfort with some users loving the shape and others loathing it.

Razer’s Basilisk V2 is more than worth its weight and undercuts the pricey Basilisk Ultimate without sacrificing much else aside from wireless capability and a few grams here and there. It’s clear that Razer listened to the praise surrounding the Viper and implementing all of the winning features from the Viper into the rest of its lineup heading into 2020 is more than a wise move. Razer’s 2020 looks incredibly bright if the company continues to listen to the wants and needs of the community.