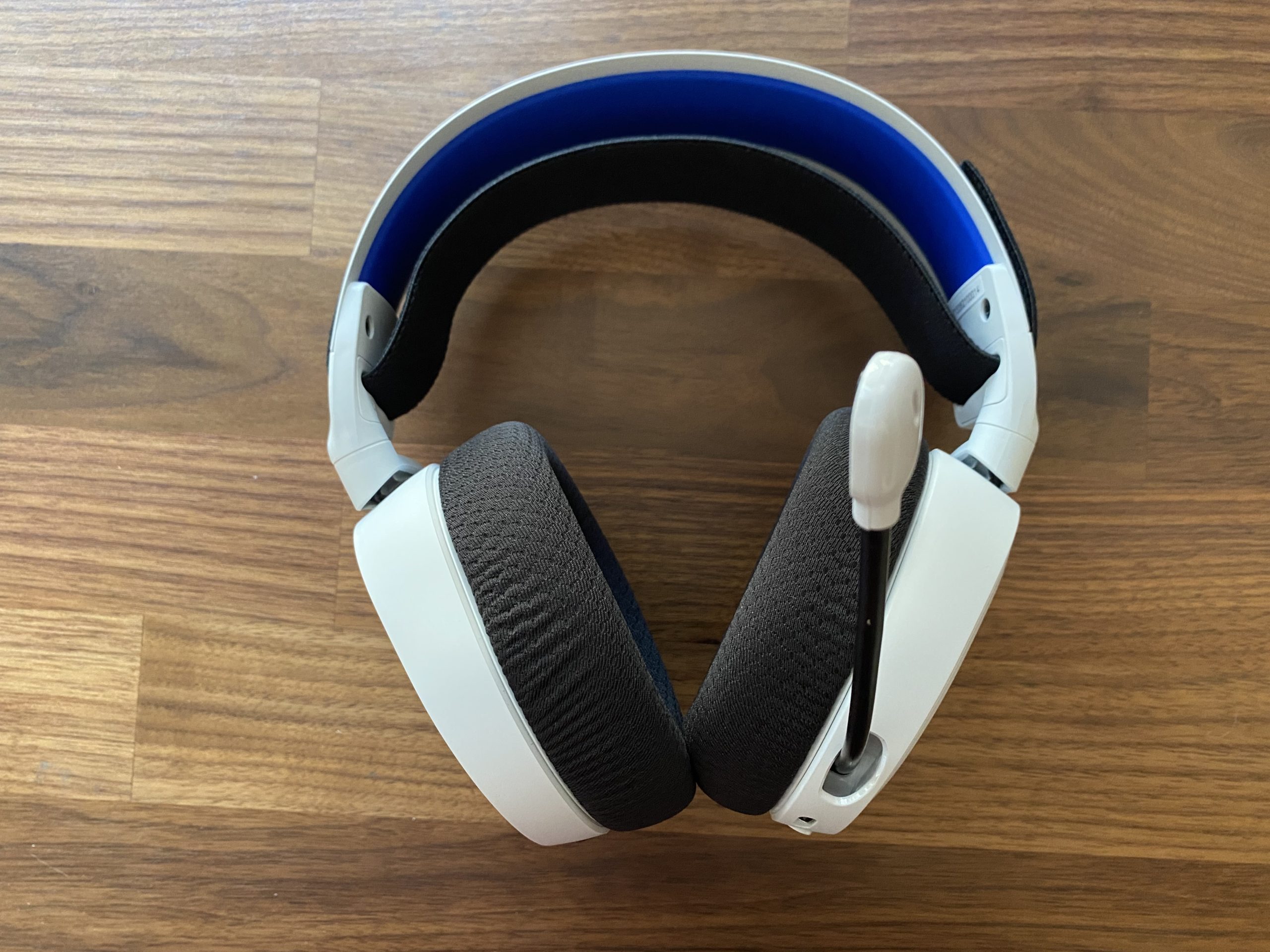 SteelSeries is joining HyperX and Razer as one of the most versatile peripheral manufacturers in the game. The brand has a heavy hand in the PC gaming market but also blends into the console arena as well. But above all other product lines, the Arctis lineup of headsets is one of SteelSeries’ most recognizable. After dropping the Arctis 7P alongside the PlayStation 5, SteelSeries updated the headset just a year later with its Arctis 7P+ headset.

The Arctis 7P+ wireless headset brings a couple of quality-of-life improvements that feel as though they should have been included the first time around on the 7P.

SteelSeries released the original Arctis 7P wireless headset in October 2020 following the launch of the PS5 and many of its bones remain in the new Arctis 7P+. Fans of SteelSeries headsets will recognize several of the Arctis’ key features returning with the newest PlayStation headset.

The Arctis 7P+ uses the same input and output as many of SteelSeries’ headsets. Using the 40-millimeter S1 drivers that promise low distortion, the Arctis 7P+ has a frequency range of 20Hz to 20kHz. This range puts it on par with other industry-leading headsets but behind SteelSeries’ own line of Arctis Pro headsets. On the input side, users have access to the ClearCast microphone that touts Discord Certification. The ClearCast mic uses a bidirectional pickup pattern and is also noise cancelling. 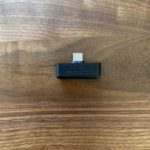 Aside from the drivers and mic, SteelSeries also includes a host of on-ear controls. On the left ear cup, users will find a mute toggle, volume control, 3.5-millimeter jack, a mobile cable jack for Android and Switch, and a USB-C port. The addition of USB-C charging is one of few upgrades the Arctis 7P+ has over the original 7P. On the right side, users will find only a sidetone control and the power button.

This headset is instantaneously recognizable as a SteelSeries product, thanks to its design. Using the same Airweave earpads, metal headband, and self-adjusting ski goggle band follows the Arctis design language to a tee. Like most of the brand’s headsets, the Arctis 7P+ uses color to denote its intended use. The Arctis 7P+ comes in black and blue or black and white to signal its PlayStation compatibility. Along with PlayStation compatibility comes Tempest 3D AudioTech compatibility for PS5 users to get the most out of their headset.

Hear everything with or without surround sound

SteelSeries headsets are typically some of the more dependable headsets on the market and that rings true with the Arctis 7P+ as well. This multiplatform headset may not feature the Hi-Res drivers of the Arctis Pro, but its performance is still up there with the best of them.

Jumping between PS4 and PC provided similar performance. The Arctis 7P+ gives the user a noticeable amount of separation and avoids any hint of muddiness. Even with bass boost on, there’s no need to strain while keeping an ear out for enemies. This is especially handy in games like Rainbow Six Siege with high risk-reward dynamics where confidence is a must. Going along with the separation, audio cues are also discernible through muffled in-game ambient noise.

Audio in games with an intense sound design still feel frenetic but lose a little energy on impact. Even with bass boost, there was some weight missing from the characteristically intense sound of Insurgency: Sandstorm. This felt like a reasonable trade-off, considering the separation helps in a more competitive environment than weighty bass.

SteelSeries gives players the option to dial in their own EQ settings through SteelSeries Engine and provides some presets as well. The preloaded presets are flat, bass boost, smiley, and focus. Bass boost is a little weak, flat provides a familiar out-of-the-box sound, smiley sticks the bass in the background, and focus sounds almost metallic or tinny at times. None are particularly winners, but that’s a more subjective note.

Another staple in the SteelSeries lineup, the ClearCast microphone is a familiar headset mic option. While it can’t compete with a desktop microphone, SteelSeries proprietary mic offers quality input that requires the user to dial in its placement more than other mics.

The Arctis 7P+ ClearCast mic is finicky when positioning it for use. On several occasions, the mic sounded muffled and distorted. Slightly adjusting the mic remedied the issue every time. While mic placement is always important, the ClearCast felt a bit more sensitive than others and needed to be tweaked somewhat frequently.

A desired feature on many headset mics is noise cancelling. This feature doesn’t shine quite as bright on the ClearCast, and the microphone lets in a decent amount of noise. What it seems to do well is make sure that the noise that does get in isn’t too loud. Background noise stays in the background, even if it’s a bit louder in your immediate surroundings. 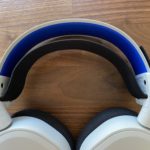 A massive win for nearly every SteelSeries headset is their exceptional comfort. Pairing the self-adjusting ski goggle band with the Airweave earpads creates a pressure-free gaming experience. The headband never digs into the top of the user’s head, and the Airweave earpads stay remarkably cool. It takes a couple of hours to feel slightly warm, and even then, there’s little discomfort or heat.

An unsung hero of most Arctis headsets is the metal headband. While many headsets include metal reinforcement, the Arctis 7P+, and its siblings feature a lightweight headband that doesn’t weigh down the experience. The Arctis 7P+ is only about an ounce lighter than the Logitech G Pro X Wireless, but the headband design makes it feel significantly lighter.

A little too similar

As noted earlier, this headset is a little too similar to its predecessor. Sharing nearly every spec and design feature with the original 7P that was released just a year ago feels like this is how the headset should have originally launched. Costing $20 more than the 7P also presents an issue.

Bumping the battery life up from 24 hours to 30 is a noticeable improvement but not an impressive one. Tacking on an additional six hours is undoubtedly helpful, but if you’re someone who bought this headset a year ago, then instead of paying a $20 premium last year for the extra battery, you now have to pay full price just to get one feature you needed from the 7P.

The same can be said with the USB-C port. It’s a worthy upgrade, but it’s something that should have shipped a year ago. SteelSeries made these improvements after listening to fan feedback, according to its website, but USB-C is hardly new tech and is often a desired feature. With many gamers and reviewers discussing the wide adoption of USB-C for what is now years, it’s an odd decision to not include it and double back a year later.

SteelSeries’ Arctis 7P+ features everything a PlayStation user might want in a wireless headset, but it feels like it’s a year late. The original Arctis 7P is just over a year old and is still listed on the SteelSeries site. It seems like an odd play to update a headset a year later with features that likely could have been implemented in the original. Now, instead of just ponying up the extra $20 at launch, 7P owners who are dissatisfied with the lack of USB-C or battery would have to go all-in on a new headset.

If you haven’t picked up a headset for the PS5 yet and are a SteelSeries fan, the Arctis 7P+ is a sure bet and has you covered across multiple platforms. If you’ve already picked up a 7P, there’s not much going on here that you aren’t already experiencing unless you need USB-C connectivity and a couple extra hours of battery.