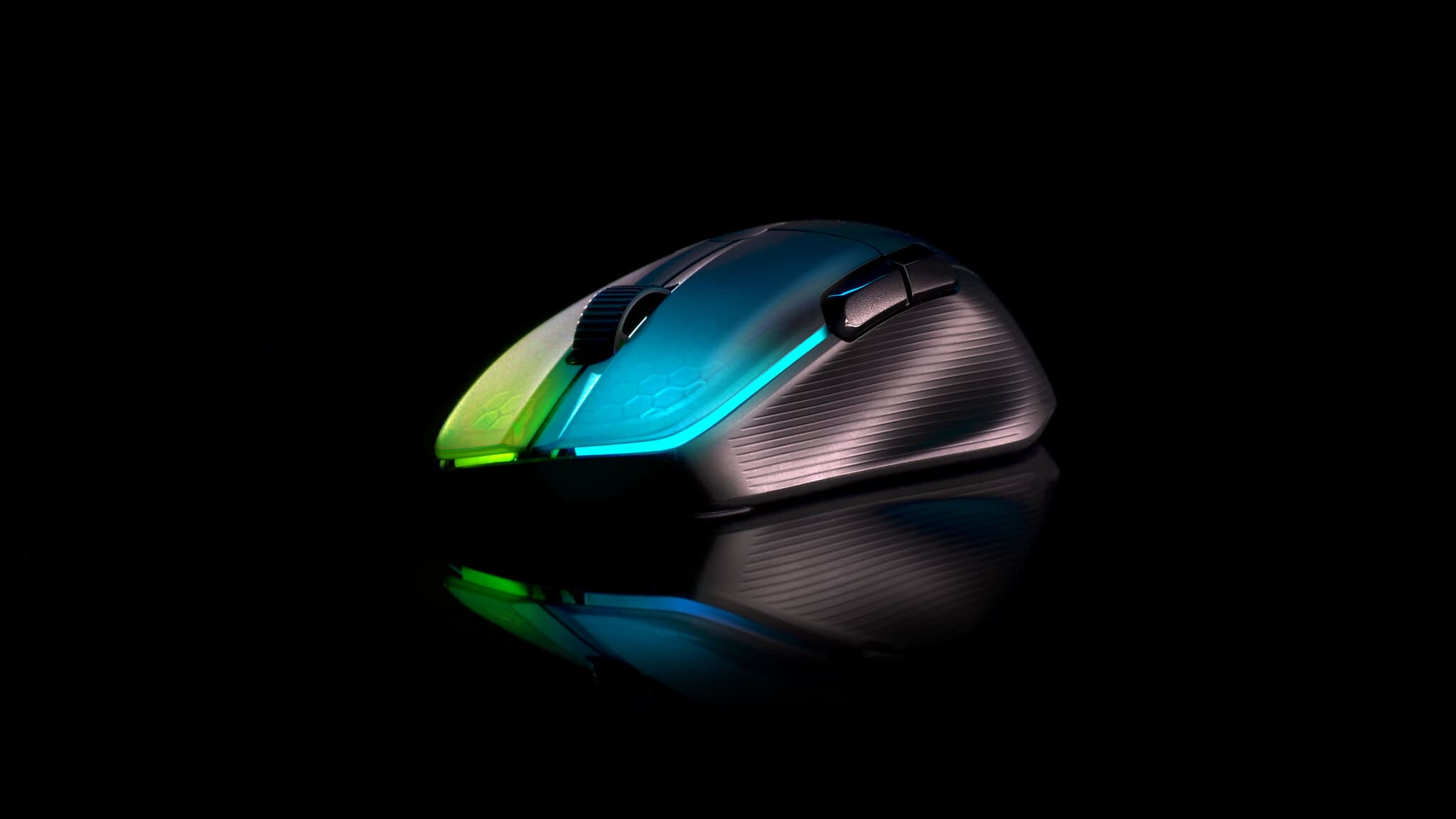 Lightweight gaming mice come in all shapes and sizes, and it’s hard to stand out in a crowded market with so many options available. ROCCAT consistently avoids this pitfall, thanks to its sometimes polarizing designs that are loud, aggressive, and fresh.

ROCCAT’s new lightweight option is a redesigned successor to the Kone Pure, and it excels in nearly every area, but some build quality issues hold it back from achieving its full potential.

The Kone Pro weighs in at 66 grams and features a solid-shell design with some additional flair. Its weight undercuts other right-handed ergonomic gaming mice like the Razer DeathAdder V2 and Corsair Sabre RGB Champion Series by 16 grams and eight grams, respectively. For a mouse that forgoes the traditional honeycomb design, the Kone Pro is impressively light. It even beats out the solid-shell Pwnage Ultra Custom Symm by 11 grams.

Pairing the minimal weight with the improved 19,000 DPI Owl Eye sensor makes for a responsive and effortless experience. While polling rate has primarily overtaken DPI as the main talking point in gaming mice, the Owl Eye sensor still provides industry-standard performance with a high maximum DPI, 1,000Hz polling rate, and 50g acceleration. Our reviewer didn’t notice any issues with the sensor, and performance felt consistent across DPI settings. Users can also adjust the liftoff distance and acceleration in the Swarm software.

ROCCAT loaded the Kone Pro with its proprietary Titan optical switches, rated at 100 million clicks. These switches have no pretravel and are relatively crisp, but not to the Logitech G Pro X Superlight’s level. There’s still a bit of softness despite the responsiveness of the switches, but probably not enough to be outright divisive.

The only real issue that hinders the Titan switches is the right mouse button creaking after a few days. It doesn’t feel like an issue with the actual switch and seems more like a build quality issue. Another build quality issue is the slight amount of play in the side buttons. It isn’t noticeable at first, but over time, the side buttons begin to wiggle and cause more rattle than our reviewer would have liked.

One odd but welcome addition is the lightweight aluminum scroll wheel, dubbed the Titan Wheel Pro. The tactility of the scrolling function combined with the overall harsher feel of the aluminum wheel takes some getting used to, but the scroll wheel was never an issue while gaming.

ROCCAT equips the Kone Pro with heat-treated PTFE feet and includes an additional set in the box. The feet on the Kone Pro are some of the best on the market and provide an impressively smooth glide that makes tracking slightly easier. These feet won’t make you better at gaming, but they might make you a bit more comfortable. For comparison, they feel just a hair smoother than the Logitech G Pro X Superlight.

Pairing the PTFE feet with the PhantomFlex cable makes the Kone Pro feel close to wireless. Corsair’s proprietary paracord cable still takes the cake in terms of overall pliability, but the PhantomFlex gives it a run for its money. ROCCAT’s PhantomFlex cable maintains a high level of flexibility without looking unsightly or outright ugly in the Corsair paracord’s case. Combined with the PTFE feet, the Kone Pro provides an unencumbered gaming experience.

Though its lighting is impressive, the Kone Pro’s main strength is its shape. Using a nearly identical shape to the original Kone Pure, the Kone Pro’s body falls somewhere between a Logitech MX518 and a DeathAdder. The shape of the Kone Pro lends itself to palm, claw, and fingertip grips. Despite this, it may be difficult to find a mouse as comfortable as the Kone Pro is when using a palm grip.

The Kone Pro measures 2.83 inches (7.2cm) in width and 4.9 inches (12.56cm) in length, making it friendlier toward medium to large-sized hands. The slightly wider flair and pronounced hump may feel uncomfortable for users with smaller hands.

Our reviewer recently said the Corsair Sabre RGB Pro Champion Series was their new favorite ergonomic mouse, but the Kone Pro knocks it off the pedestal. The hump of the mouse hits just below the knuckle, the thumb slots easily and securely into the groove, and the side buttons are large enough to reach with ease.

For reference, our reviewer’s right hand measures 7.7 inches (19.5cm) in length and 4.1 inches (10.4cm) in width, categorizing their hand within the medium to large range. ROCCAT’s Kone Pro will serve users with suitable hand sizes across all three grips, but there’s no denying the exceedingly comfortable palm grip experience.

The Kone Pro is easily one of the most comfortable right-handed ergonomic mice on the market, but some build quality issues hold it back from being one of the greats. The creak in the right mouse button and the wobble in the side buttons after only a few days of use doesn’t showcase overall build quality in a positive light.

There are many areas where the Kone Pro excels, making it a little easier to recommend. The mouse feet and cable besting some of the industry’s top names is an encouraging sign that ROCCAT is upping its standards. It also doesn’t hurt that ROCCAT’s RGB lighting game is on point here. But even with the exceedingly comfortable shape and unique design, the creak and wobble remain points of concern. These issues shouldn’t be present right out of the gate at this price point.

If you’re looking for the most comfortable palm grip experience for medium to large hands and don’t mind a little bit of jank, the Kone Pro will deliver.