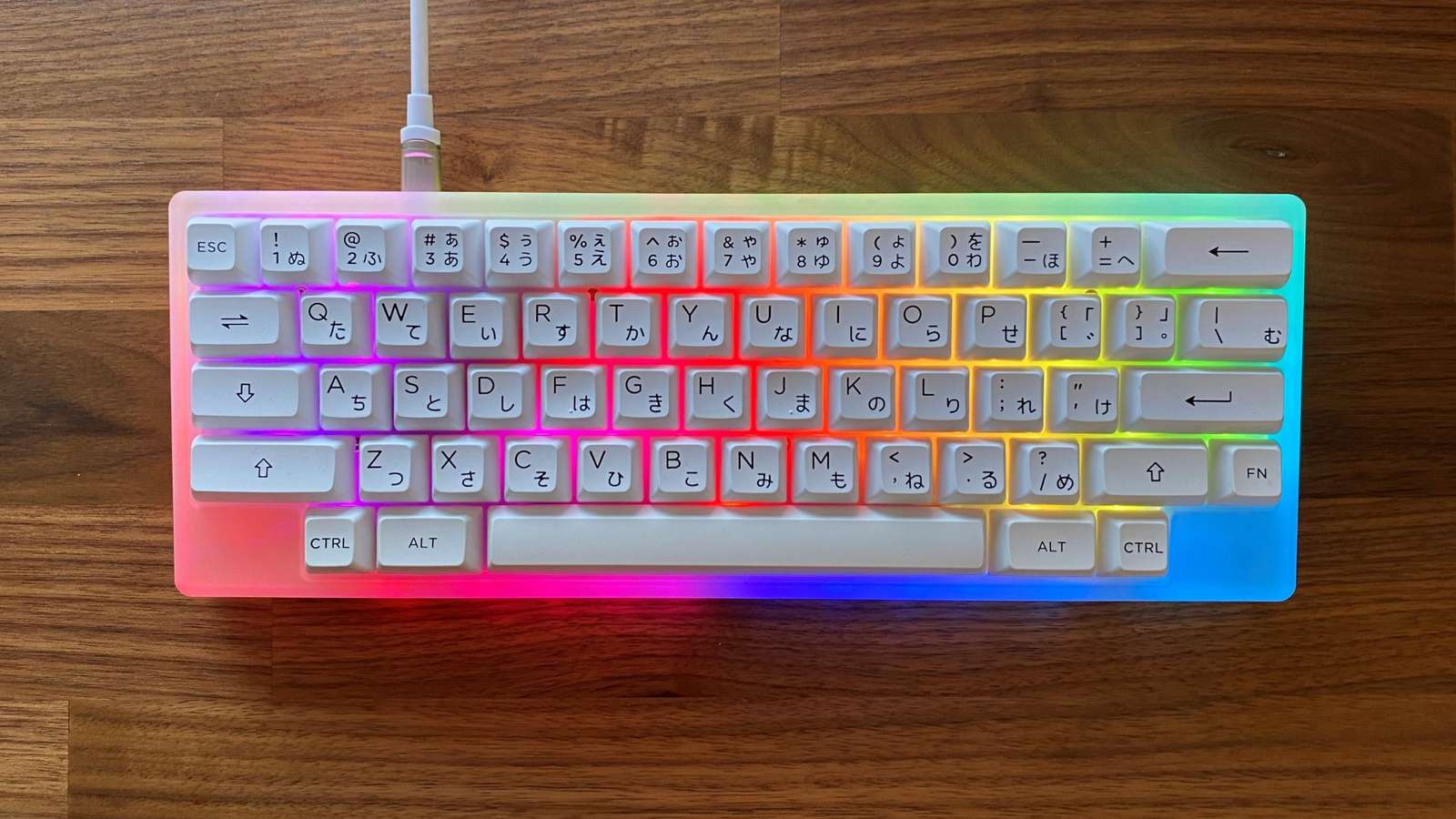 Gaming keyboards are somewhat predictable in their designs and while they do their best to evolve, they ultimately have to be widely appealing. Looking at the more aesthetically charged section of the market, Akko provides alternative options to gaming keyboards that offer a different take on the traditional gaming keyboard.

Akko’s ACR59 BOW uses a niche form that can be polarizing. While this small form factor keyboard may not be an ideal out-of-the-box option for competitive gaming, there’s no substitute for its dialed-in aesthetics.

Despite looking drastically different, Akko’s CNC acrylic-based ACR59 BOW boasts many of the core features of a standard gaming keyboard. Looking past the Windows keyless design, the ACR59 has n-key rollover, customizable RGB lighting, double-shot PBT keycaps, USB-C connectivity, macro support, and hot swappability. It’s easy to dismiss the ACR59 as anything but a gaming keyboard at first glance, but its feature set holds up well against traditional keyboards.

As companies move away from software, onboard customization is becoming increasingly popular—as seen recently with Xtrfy’s M4 Wireless. Being able to change up lighting with a few key presses is far more convenient than navigating bloated, buggy software. Granted, some users prefer software, and it’s noticeably felt when it’s missing on products that don’t quite nail the onboard commands. Luckily for Akko’s small form factor keyboard, this isn’t the case.

Probably the easiest way to get an attaboy in 2022 is with a USB-C port, which the ACR59 ships with. It also has a rubberized coiled cable for better or worse. While coiled cables are all the rage in the enthusiast scene, Akko’s iteration is folded rather than rolled, which causes kinks. Time will solve the issue but it’s unruly out of the box.

A smaller feature that would be sorely missed if absent is the double-shot PBT keycaps. Using PBT over ABS puts the Akko ACR59 on par with larger gaming peripheral companies like HyperX and Razer. The ACR59’s caps are less textured than Corsair and Razer’s, but they provide a decent feel while typing and are more textured than HyperX’s. The ACR59 also comes with extra keycaps for a wide variety of layouts up to full-size.

One design element that will stand out to any gamer is the Windows-keyless layout. This can help players stay in the game and avoid accidentally hitting the Windows key while reaching for a Ctrl bind. It isn’t for everyone, but for those who have suffered at the hands of the accidental fat-finger Windows keypress, it may be a permanent solution.

One pitfall of more enthusiast-geared keyboards is that many have a fixed typing angle. While this isn’t an inherently “bad” thing, it does take away from the ACR59’s flexibility. Akko recognizes and attempts to remedy the issue with dual-layer adjustable stick-on feet, but they, unfortunately, can’t stay locked.

The included stick-on feet just don’t hold up to any use. After applying the feet every which way, there was just no way to get the feet to lock in place. Every time the feet were positioned, they would almost immediately come unlocked, making it impossible to customize the typing angle.

While enthusiasts may be used to making a fixed typing angle work, many gamers may not be so familiar. There may be a degree of discomfort without a wrist rest to counteract the height of the keyboard but it isn’t just the fixed typing angle that may cause an issue.

Right off the rip, the ACR59 BOW is dripping with style. Aesthetically speaking, the keycaps aren’t unlike some of the more expensive options from GMK and other high-end keycap manufacturers. Even in those kits, expansion mods cost an arm and a leg, but Akko provides keycaps for every other popular layout up to full-size. But the issue comes with the profile of the keycaps.

Akko uses ASA profile keycaps on most of its keyboards and while this isn’t an issue for enthusiasts, it will be jarring for most gamers. If you’re unfamiliar with ASA profile vs. OEM and Cherry profile, ASA keycaps are taller and feature a rounded design. This can get in the way of gaming pretty easily, which is a shame because the double-shot PBT and overall look of the keycaps are of solid quality.

If you’re someone who has never ventured into other keycap profiles, having a wrist rest handy will easily solve the above issues. Because this is an easy fix that requires a modest additional investment, there’s no need to stay away from gaming on the ACR59 BOW, especially when discussing its switches.

There are a wide variety of switches clicking around the market. Some manufacturers like HyperX and Akko make their own switches, while companies like Cherry and Gateron have been around independently for some time now. Akko includes its Jelly White switches on the ACR59 BOW, but other editions come with different switches that are color-matched to the board.

Jelly White switches are lighter than traditional Cherry MX Reds, making them more than responsive enough for gaming. Akko’s proprietary switches feature a 35-gram operating force and a two-millimeter activation point. For reference, that’s 10 grams lighter than the standard Cherry MX Red while maintaining the two-millimeter activation. The experience here is optimal for gaming. Jelly White switches are speedy but do have a bit of scratchiness. Still, it’s nothing a bit a lube can’t fix if you’re willing to invest more time into customizing your keyboard.

Despite being ideal for gaming, the Jelly White switches are far less forgiving when it comes to the typing experience. Given the optimal activation point and the feather-light operating force, the Jelly White switches may have you pressing the backspace button a bit more than usual. There’s always the option to swap the switches if you’re attached to the rest of the board’s feature set.

If you’re in the market for something fresh that isn’t a dedicated gaming keyboard, the Akko ACR BOW is an interesting option. Having a Windows-keyless layout is going to be a polarizing design element—you’ll either love it or hate it. Either way, the smaller form saves a lot of desktop real estate, and the unorthodox design brings a lot to the table in terms of altering a gaming setup.

While the performance of the switches and quality of the keycaps feel like solid performers, the keycaps profile and lack of adjustable typing angle may be turn-offs for those who are accustomed to more traditional gaming keyboards. That isn’t to say the Akko ACR59 BOW is unfit for gaming, only that it will take a wrist rest to make it a truly comfortable gaming option. If you’re up for the additional investment of a wrist rest, the Akko ACR59 BOW is one of the more interesting prebuilt options on the market.