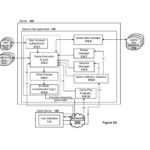 Newly-filed PS5 patents might have given fans their first look at the next-generation console’s user interface.

Sony is experimenting with a UI that would learn the player’s “game behavior,” using said information to generate “behavior metrics” that will “improve the user’s gameplay for the different portions of the game,” according to a new patent found by TheGamePost.

Rough sketches of the new UI allow us to see that it’s similar to the existing one of the PS4. It also shows the aiding process at work, where players have the option to press a hotkey to view a textual or video guide.

The machine learning process will also incorporate recorded gameplay footage from other players. The third-party footage will be used to further evaluate what a consumer needs to clear a particular level or beat a certain boss. The patent even describes that the system will help scan the video to see if it can further aid other players.

While fans might not be able to see the UI and the actual console for a while, Sony has officially announced that “The Future of Gaming” livestream will take place on June 11 at 3pm CT. The company intends to reveal upcoming releases for the next-generation console.

Related: How to watch the PlayStation 5 games reveal “The Future of Gaming”

Initially scheduled for June 4, the event was postponed in solidarity of protests over systemic racism and police brutality in the wake of George Floyd’s murder.