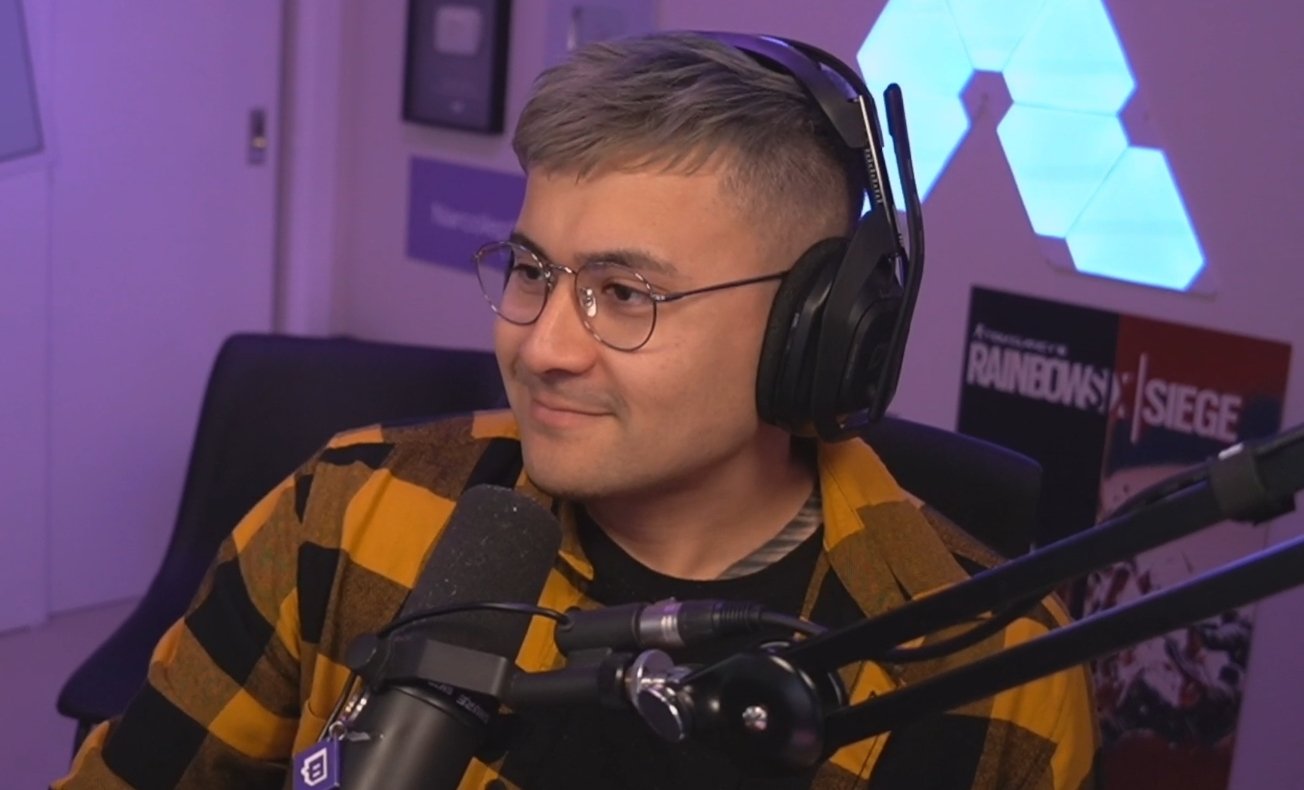 NarcolepticNugget is best known for his Rainbow Six Siege streams and YouTube uploads, but he also dabbles in other competitive titles like Apex Legends and VALORANT. Alongside him is a rotating cast of regulars that add to the hilarity and mishaps of each VOD or upload. From waffling about with Marley to visits from the classic Lunchbox crew, NarcolepticNugget keeps things upbeat with the help of his battlestation.

Astro A50s are one of the staple gaming headsets for cross-platform functionality. With the help of the base station and accompanying software, A50s can swap between console and PC with relative ease. While the Astro A50s provide great enough detail to accurately track enemy footsteps without bassy gunshots swallowing them up, the clamping force may be too strong for those with larger heads.

Logitech G gutted the excess weight, left side buttons, and DPI button from the original Pro Wireless mouse in favor of the 63-gram Pro X design. Despite its lack of left-handed support, the Pro X Superlight is one of the top gaming mice in competitive play. It won’t make you better by any means, but it’s understandable to see a gunner like NarcolepticNugget run one in his setup given its wide-appealing comfort. Beware the extravagant price tag, though. It’s worth waiting for a sale if you can help it.

Credited with being one of the first 60 percent keyboards to become mainstream, Ducky’s One 2 Mini can be seen on many types of gamers’ desks. From professional esports players to casuals, the space-saving benefits of this form factor are plentiful. If you can stomach losing dedicated arrow keys, the Ducky One 2 Mini provides a solid gaming experience that brands like Razer and Corsair have since imitated. Ducky’s option does fall behind in one area since it doesn’t give you an aluminum case.

Often touted as the microphone that recorded Michael Jackson’s Thriller, the SM7B can be seen in the setup of many content creators. The design has stood the test of time and, although it’s expensive, there’s a great deal of value to be had for those who are serious about their content creation. Shure’s shielded microphone has a frequency response of 50 to 20,000Hz with a cardioid polar pattern. It also comes with a foam windscreen and a close-talk windscreen for a bit of additional flexibility.

ZOWIE’s XL2540 is a popular choice among esports athletes and other types of competitive gamers. The 240Hz refresh rate keeps players in step with the competition, only outshined by 360Hz monitors powered by a capable GPU. ZOWIE’s take on a 240Hz monitor also includes the S-Switch, which lets users quickly switch between settings profiles. If you’re really having trouble blocking out the environment, the included side shields might help. ZOWIE also makes a model without the shields.

Aside from his main, NarcolepticNugget also runs two additional ASUS VG248QE monitors. These 1080p 144Hz monitors are still plenty enough for fast-paced gaming in 2022 but can serve as ideal secondary monitors, thanks to their 24-inch size. They may not be as fast as a 240Hz or 360Hz monitor, but they’ll still do the trick in a competitive environment without issue.

Glorious’ XXXL mousepad is exactly what it sounds like, an extra extra extra large mousepad that can almost cover an entire desktop depending on the size. It ships in three varieties: Stealth, white, and original. Stealth has a minimalist black logo in the bottom corner as opposed to the white, whereas white is essentially what it sounds like. If you’re interested in picking up one of these stitched-edge mousepads, be aware that it will measure a beefy 24 by 48 inches.

The building blocks of any gaming PC are the CPU and GPU. If you’re streaming and gaming on one PC, then you’ll likely want to ensure you get some high-performing components to cover your bases. But if you’ve got a secondary streaming PC, you won’t need to go all out. This is the case with NarcolepticNugget’s gaming CPU, which is about six years old at the time of writing. While it’s a bit older, it can still handle games like Rainbow Six Siege with ease.

NarcolepticNugget didn’t specify on which model he runs in his gaming PC, but being an RTX 3080 already pushes his performance to the front of the line. If you’re looking at a Founders Edition of the RTX 3080, then you’d net a base clock of 1.26GHz with a boost of 1.71GHz and 12GB GDDR6X memory. With this configuration, Siege benchmarks at a maximum of 431.2fps and a one percent low at 2.98.1. You’ll need a slightly more powerful PSU to run an RTX 3080, though. Nvidia recommends a 750W PSU for optimal performance.

On the motherboard end of things, NarcolepticNugget runs a flexible board from ASUS. A couple of nifty features here are the dual M.2 drive slots for expanded storage and the gigabit Ethernet port, should you be so lucky to achieve those speeds available in your area. Aside from those factors, you won’t need to worry about this motherboard unless you have a compatible CPU using the LGA1151 socket.

Cooling this build is the popular Corsair H115i, which is a 280-millimeter radiator with a traditional copper cold plate to absorb heat generated by the CPU before being pumped away by the liquid in the hoses. Things here are pretty standard, with an aluminum radiator backed by two static pressure fans that push air 104.65 cubic feet per minute (CFM). At 40 decibels, this isn’t the quietest liquid cooler, especially next to a similar Arctic Liquid Freezer 280.

In keeping it classic, NarcolepticNugget uses the well-ventilated Fractal Focus G. With large holes on the front, top, and bottom of the case, the Focus G promotes a healthy amount of airflow. Standard models come with two white LED fans and two expansion bays for hard drives or solid-state drives. This case is missing a USB-C port on the front panel, but that won’t be a deal-breaker for everyone.

Things are fairly straightforward here. NarcolepticNugget runs an 850W PSU since the GeForce RTX 3080 requires a minimum of 750W, leaving him plenty of overhead for future cards that will likely be more power-hungry. Having a Gold certification is also a good sign of this PSU’s efficiency. This means that this PSU maintained 87 percent efficiency at load levels of 20, 50, and 100 percent.

Switching to NarcolepticNugget’s streaming PC, the Threadripper 3960X is a high-end performance desktop (HEDT) processor that isn’t geared toward gaming. If you were to peek at its Cinebench scores, you’d see it up at the top of the pack with the 3970X. It may net only about 80 percent of the 3970X’s power, but it trounces Intel’s Core i9-10980XE while undercutting both options in price. Needless to say, you won’t run into any issues if your pockets are deep enough.

Despite being outclassed by the 30 series, the GeForce RTX 2070 has plenty of wind left in its sails. The specific model used by NarcolepticNugget still offers ray tracing and DLSS as well as 8GB GDDR6 memory. It’s plenty enough to support a stream and can be seen as overkill in most cases.

Unless you’re running a third-generation Threadripper with an sTRX4 socket, then there’s really no need to sweat this one. However, those who are in need of a motherboard that supports a Threadripper CPU can make use of this board’s three PCIe 4.0 x16 slots as the base for their secondary streaming setup.