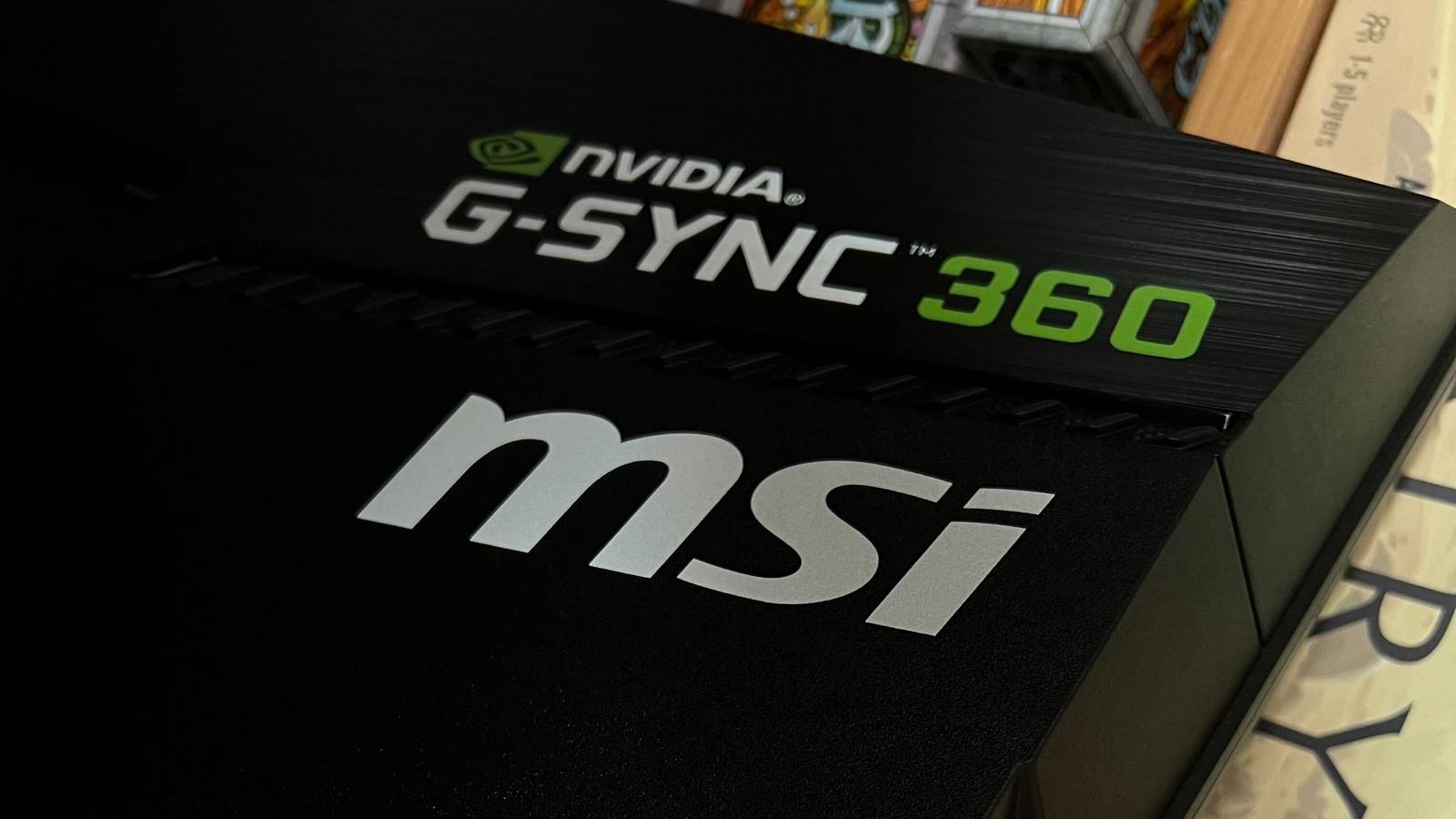 Even as we stare down the barrel of upcoming technology like quantum dot OLED gaming monitors, mini-LED screens with higher brightness standards and hundreds more dimming zones, it’s still a good time for the gaming monitor market.

There are options all over the shop. The first proper wave of 4K, 144Hz gaming monitors that are relatively affordable has finally arrived. There’s no shortage of entry-level and mid-range 1440p screens, whether you just want a resolution upgrade or you want the best all-around gaming option.

And for those into esports, there’s the 360Hz crowd. Like the Oculux NXG253R—which has no shortage of competition from Acer, Alienware, ASUS, and others—these screens solely focus on providing the fastest possible end-to-end response times.

That’s why every 360Hz monitor, the NXG253R included, now ships with Nvidia’s latency analyzer technology. This is specialist hardware built into the monitor that allows end-to-end system analysis once a compatible mouse is connected to the dedicated USB port.

Of course, all the hardware analysis is useless if your PC isn’t capable of running games at 360 frames per second or close to that figure. (You can also opt to run games at 240Hz instead if you prefer the slower refresh rate with motion blur reduction enabled, but we’ll get into why you might want to do that later.)

So that’s the fundamental challenge the NXG253R faces; it’s no small challenge considering we’re still in the midst of the chip shortage, which continues to make PC upgrades more expensive and more difficult to procure.

The vast majority of 360Hz monitors are on the smaller side, and the NXG253R is no exception here. You’re getting a 1080p/360Hz panel squeezed into a 24.5-inch frame, with the panel based on industry-standard IPS technology.

Like modern IPS screens, the bezel is relatively thin. There are three USB ports on the left-hand side, with the top port reserved for Nvidia’s Reflex technology. It comes with a stand, power, DisplayPort, and HDMI cables in the box, and the NXG253R can be rotated into portrait mode.

Crucially, the NXG253R comes with support for Nvidia’s ultra-low motion blur (ULMB). ULMB is similar to the DyAc technology in BenQ’s popular monitors, and it’s designed to make images much clearer at high motion. There’s a strong catch with the technology though: it’s only supported up to 240Hz, not 360Hz, and it substantially reduces the monitor’s brightness when enabled.

The rest of the NXG253R’s specifications can be viewed in full on the MSI website. One key point to consider: if you are going to use the NXG253R with consoles, note that the highest refresh rate possible via HDMI is 240Hz.

Despite the large G-Sync 360Hz badge on the back, most of the NXG253R’s chassis is relatively understated. The USB ports are easy to access on the left, and the tilt functionality makes it easy to plug in your DisplayPort/HDMI cables.

Being a 24.5-inch monitor, the NXG253R can be easily attached to a monitor arm if you’d rather avoid the hassle of a stand. (Make sure your desk has enough support before you start clamping too many monitors to the desk though.) If you do opt for the stand, however, installation is relatively easy: You can get the monitor in place within a few minutes.

The rear of the monitor has an RGB strip, but beyond that, the NXG253R doesn’t have too much flash. It’s straightforward, much like most of MSI’s monitors over the last few years. There’s a joystick at the back right of the monitor for changing inputs and navigating the NXG253R’s on-screen display, which works well enough.

The main benefit of the NXG253R is its blisteringly quick response time. Being able to run the screen at full capacity means the screen can refresh once every 2.8 milliseconds. Whether you’ll get the full benefit of that speed depends on your PC and how well optimized the game you’re playing is.

The vast majority of games—especially during the peak of a competitive match—usually won’t run anywhere close to 360 frames per second. Even a game like CS:GO, which runs on the antiquated DirectX 9 architecture, frequently annoys users with bugs that cause lower frame rates.

That doesn’t mean it’s impossible to run games at such a high frame rate. The latest CPUs, especially Intel’s 12th generation Alder Lake and AMD’s upcoming 5800X3D, are more than capable of getting VALORANT, CS:GO and some other games like Splitgate to super-high frame rates (with some tweaking). But those chips are extraordinarily difficult to acquire, and they come with a super high premium—often vastly more than what most people are willing to pay.

The NXG253R is still very capable if you can’t hit 360 FPS, though. The in-built G-SYNC hardware (rather than G-SYNC Compatibility, which most monitors have) covers the monitor’s entire refresh range, so there’s no need to worry about screen tearing.

There’s also a good reason to not worry about 360Hz: The screen’s ULMB only works at 240Hz. Enabling ULMB will reduce the screen’s overall brightness quite significantly. It’s not a great option if you’re in a room with a ton of natural light, but it does vastly improve the clarity of moving images, especially in PUBG, Fortnite, Squad, or Escape from Tarkov where spotting small targets in the distance can be a game-changer.

If you don’t have ULMB enabled, the NXG253R is a little more flexible. There’s a maximum brightness toggle in the settings that goes all the way up to 450 nits, provided you’re using the User preset toggle. There are other presets for different game types and variable backlight toggles over DisplayPort and HDMI.

Like most screens, you can also apply Normal, Fast, and Fastest settings for the monitor’s overdrive. The Fast and Fastest are best suited for games like CS:GO and other shooters, but these modes also introduce some heavy artifacting (often referred to as overshoot) when objects are moving quickly on-screen. The Fast setting here provides the best balance of both worlds, and it’s recommended if you don’t want to opt for the ULMB setting—which many might not, given variable refresh rate support is disabled when ULMB is enabled.

If color reproduction matters, the NXG253R can reproduce the entirety of the sRGB color space—although, as is always the case with any monitor, you’ll want to make sure you calibrate it first. There are better screens if you’re looking to do amateur or professional video work, though. But any content creator would probably prefer a screen with a higher resolution purely for more productivity.

Another thing worth calling out is the screen’s HDR support. While you can technically enable HDR in Windows (or consoles) for the NXG253R, it lacks the local dimming zones, uniformity, and maximum brightness needed to really get the most out of HDR content. PS5 and Xbox Series X users will get a lot more versatility out of monitors with HDR 600 or HDR 1000 support, while content creators might prefer something like MSI’s own 32-inch MPG321UR-QD for its excellent color reproduction.

Should you buy the MSI Oculux NXG253R?

Any investment in a monitor needs to come with a question: what are you likely to be playing in the next three to four years? Unlike most PC parts, monitors are the one thing that you’re likely to keep between generations.

And that’s one of the main challenges for the MSI Oculux NXG253R. It’s an excellent monitor for CS:GO or VALORANT pros, especially the latter. The NXG253R’s IPS panel reproduces color much better than the popular TN-based BenQ monitors, and the monitor as a whole is better suited to other types of games and content consumption than what a lot of esports pros typically recommend.

But the real challenge is the monitor tech that’s on the horizon. Ignoring the quantum dot OLED screens due in the next couple of years—as they’re liable to cost well over $2,000, if not more—the real threat will be the rise of 1440p and 4K gaming monitors capable of 240Hz or higher refresh rates.

Many 1440p screens with decent refresh rates are already selling in the same price range as 360Hz screens. The Samsung Odyssey G7, one of the few screens available with 1440p, 240Hz, and HDR 1000 support, costs the same amount as the NXG253R. The ASUS ROG Strix XG27AQM offers 270Hz in a 27-inch screen with 1440p resolution for just over $600. The value might even vary wildly depending on where you are too. In Australia, for instance, Alienware’s AW2721D—a 1440p, 240Hz IPS screen—is marginally cheaper than the NXG253R.

So it really depends on the games you play and what you use your PC for. The NXG253R is exceptionally good for that particular niche of gamer that exclusively lives for binks and flick headshots. Outside of that, however, you might want to consider the raft of 1440p or 4K gaming monitors available—not to mention what’s on the horizon, like the mini-LED 300Hz screens due out later this year.

A unit was supplied for review courtesy of MSI.