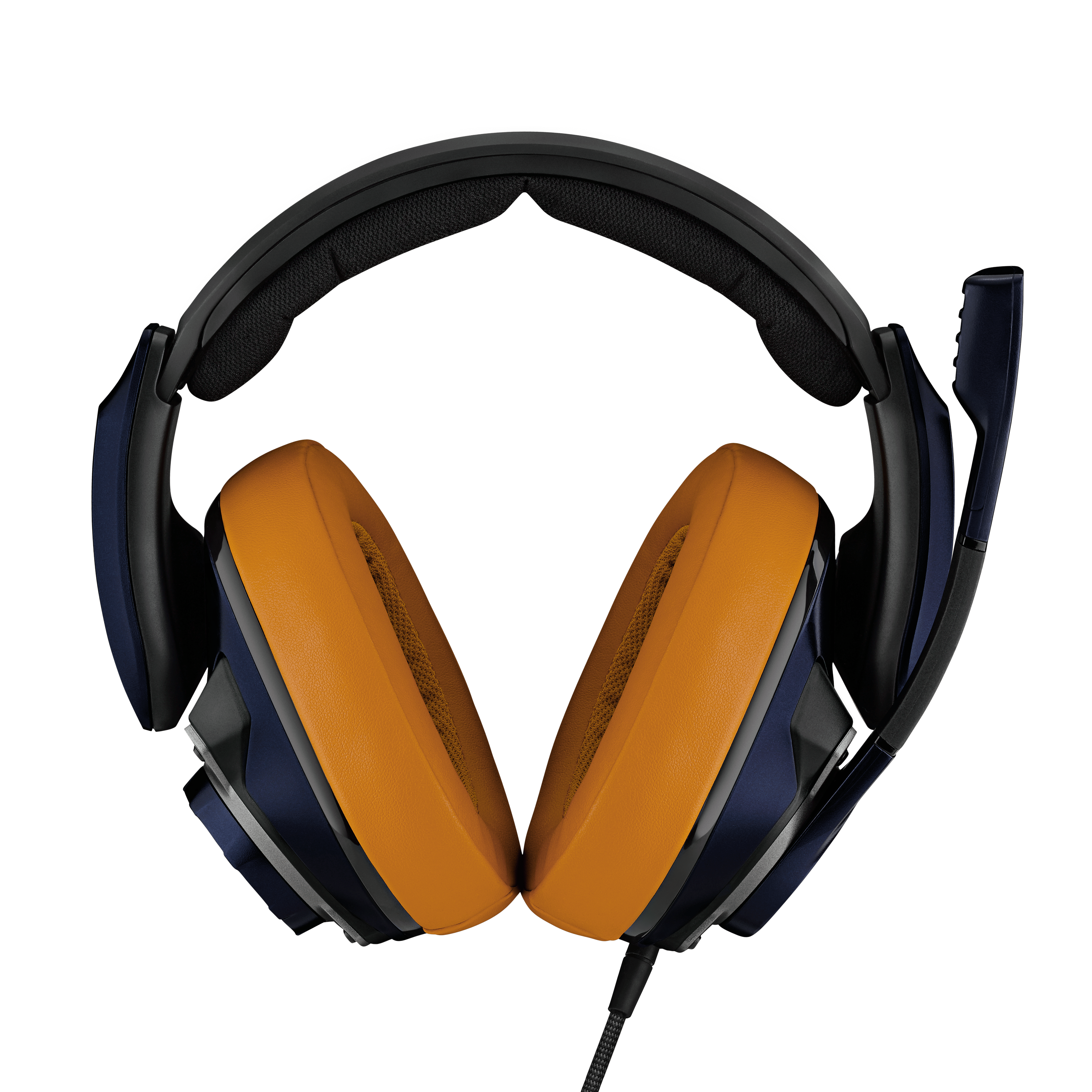 Gaming headsets are a dime a dozen and it takes a lot to stand out in such a crowded space. The market has shifted toward providing players with more versatile premium gaming headsets offering multiple connectivity options and detachable microphones. Sound quality alone is no longer enough to justify the high price point of a premium gaming headset, especially with the Logitech G Pro X Wireless and Razer Blackshark Pro V2 Wireless in the mix.

Not every company is pushing the same “bang-for-your-buck” agenda like Razer and Logitech, though. EPOS | SENNHEISER’s GSP 602 is a prime example of outstanding performance stuck somewhere in the past in terms of features. Instead of keeping with the times, the GSP 602 provides a gaming experience limited by its lack of customizability and saved by its out-of-the-box sound quality.

The GSP 602 makes an impression straight out of the box, for better or worse. Lacking subtlety isn’t a negative for every user and many gamers are bound to fall in love with the unique design of the GSP 602.

Boasting deep blue ear cups and orange-brown leatherette ear pads, the GSP 602 is one of EPOS | SENNHEISER’s most striking designs to date. When paired with the overall aggressive design of the GSP 602, the bold colorway sticks out a bit more than it would if it were on something like the G Pro X. This isn’t an inherent negative, but it turned off our more minimalism-oriented reviewer.

The branding on the GSP 602 is done much better than other companies. It could be that our reviewer enjoys a minimalist logo, but the placement of these logos on each side works well with the headset name on one side of the headband and the brand name on the other.

Over the past two years, major peripheral brands have spoiled gamers with some of the most fully-featured gaming headsets. Because the trend is to pack as much value into a premium gaming headset as possible, the GSP 602 sticks out due to its lack of modern features.

One feature that’s commonly seen on other high-end gaming headsets but is missing on the GSP 602 is a detachable microphone. While this might not impact users who only use their headset for gaming, the GSP 602 feels like a problem child when in transit. The microphone sticks out way too much and can easily snag on other items in your bag. If you bounce around frequently, this might not be the best option for you.

Another feature missing from the GSP is any form of customization unless you opt in for something like the GSX 300 external sound card. While additional software can be unwieldy and frustrating at times, there’s no denying the flexibility that software provides gamers who are looking to dial in their settings. The lack of software support for the GSP 602 seems like a missed opportunity at this price point.

Despite some large omissions, the GSP 602 has a lot going for it in other respects. One of the best features of this headset is the detachable cables that accommodate all platforms. It’s a little confusing to have a detachable cable and a non-detachable microphone, but these cables are the easiest to untangle and feel high quality compared to other brands’ detachable cables. If you’re a first-time user, be aware that the cable needs to be plugged into the headset with a considerable amount of force.

The volume dial located on the right side of the GSP 602 is another welcome feature that adds a bit more flexibility to the headset. An interesting quality of the volume wheel is how sluggish it feels. Compared to most gaming headsets, this volume wheel moves like molasses. But this quality works to the user’s benefit. By providing slower movement, it’s much easier to precisely dial in your desired volume the first time around.

In terms of comfort, the GSP 602 sends a lot of mixed signals. This headset tries its best to offer users a fair level of comfort-oriented options while thriving in some aspects and missing the mark in others.

A big win for the GSP 602 is the included ear pads. These are hands down some of the most comfortable ear pads around. Many brands like to boast that their ear pads are glasses-friendly, but the GSP 602’s actually live up to expectations. The ear pads don’t create pressure around your glasses, but they transfer it to the very bottom of the ear pad near the jaw.

Things get complicated when considering the adjustability of the GSP 602. This headset features an adjustable contact pressure headband that’s meant to help you stay comfortable, but it won’t do much for users with larger heads. The tight seal is somewhat mitigated by the plush ear pads, but the overall pressure doesn’t change much. Again, this may not be a factor for users with smaller-sized heads.

The padding on the headband itself doesn’t match the quality of the ear pads. If there’s one thing most users will likely experience, it’s going to be the fatigue from the thinner headband padding in combination with the 0.87-pound weight of the GSP 602. After about an hour of use, users may notice some tenderness where the headband sits.

The overall sound quality of the GSP 602 goes a long way in making up for the missing features and discomfort. While the GSP 602s sound their best while using an external sound card like the GSX 300, they’re more than capable out of the box.

The separation between in-game noises like explosions and footsteps feels on track with the price of the GSP 602. Tracking enemies is made easy since bassy explosions don’t swallow the sound of enemy footsteps and other audio cues like Ultimate voice lines.

Our reviewer was also surprised by how wide the GSP 602’s soundstage felt compared to other closed-back gaming headsets. Switching over to the Logitech G Pro X was a particularly interesting experience for our reviewer. While the Logitech G Pro X provides an excellent closed-back experience, the GSP 602s outpace them when it comes to overall clarity and separation. Sounds feel slightly less claustrophobic and imaging feels more accurate, resulting in a slight boost in confidence.

The GSP 602s sound a bit warm at times, especially listening to music. But the emphasis on bass never interfered with gameplay. This is where the lack of software becomes more of a flaw, though. Because there’s no option or software to dial in your preferences, you’ll be stuck with a slightly warmer than usual gaming headset. This issue is easily remedied with the EPOS GSX 300, but the additional investment puts the total cost of this headset over the $300 mark, which is out of reach for many gamers.

Things get dicier once the included unidirectional microphone comes into play. The GSP 602’s mic doesn’t hit the high watermark of the headphones themselves and there’s a fair amount of distortion to the mic in apps like Discord. The flip-to-mute feature is nifty, but the overall quality of the microphone doesn’t gel at this price. Results were marginally better with the GSX 300, but you shouldn’t need an external sound card to match your mic quality to the rest of your headset for its cost.

EPOS | SENNHEISER’s GSP 602 provides users with an excellent closed-back gaming experience that misses the mark several times over. Considering the high price of the GSP 602, missing modern features like a detachable microphone and customization software stick out as glaring omissions.

The GSP 602 is hit or miss in the comfort department thanks to its exceedingly comfortable ear pads and its underwhelming headband padding. Having the adjustable contact pressure headband may be more beneficial for users with smaller heads but won’t do much to help users with larger heads.

In terms of audio quality, the GSP 602 boasts a surprisingly wide soundstage that can give you an added bit of confidence if you’re playing off of sound. The same success doesn’t carry over to the included microphone, though, and it’s easily the biggest flaw of the GSP 602.

To get the full experience of the GSP 602, you’ll likely need to run an external sound card. But you shouldn’t have to at this price point and the additional cost puts this high-end headset well out of reach for many gamers. If you’re looking for a solid pair of closed-back headphones that are optimized for gaming, the EPOS | SENNHEISER GSP 602 is a unique-looking choice with performance to match—just don’t expect much from the microphone.