Microsoft continues to show that it is treating Game Pass as an independent service by removing the Xbox naming from most of its social media imagery.

The Xbox logo still appears in all of the banners and icons, but the word Xbox is no longer present outside of the account and website names.

This doesn’t mean much on its own, but it is a sign that Microsoft will likely have more Game Pass-related changes coming to various parts of the Xbox ecosystem soon.

Recently, Microsoft removed the 12-month subscription option for its Xbox Live Gold service from its digital stores. While the reason for doing so is still unclear, it was likely the first of several moves that will start pushing Xbox’s Game Pass Ultimate as the premier service.

Game Pass Ultimate offers players the same benefits of Xbox Live Gold, while also bundling in instant access to the more than 100 games on Game Pass. Starting in September, players with Game Pass Ultimate will also be able to use Microsoft’s game streaming service xCloud as part of the deal too.

The xCloud features coming next month means that players will be able to play games remotely on their Xbox, PC, and Phone. Removing the most obvious part of the Xbox branding could convince players on PC and mobile to give the service a try and play on a non-Microsoft device. 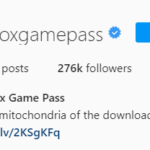 This small change was made to both the regular Xbox Game Pass accounts on every major social media platform and any other variants of the service, like the Xbox Game Pass For PC.