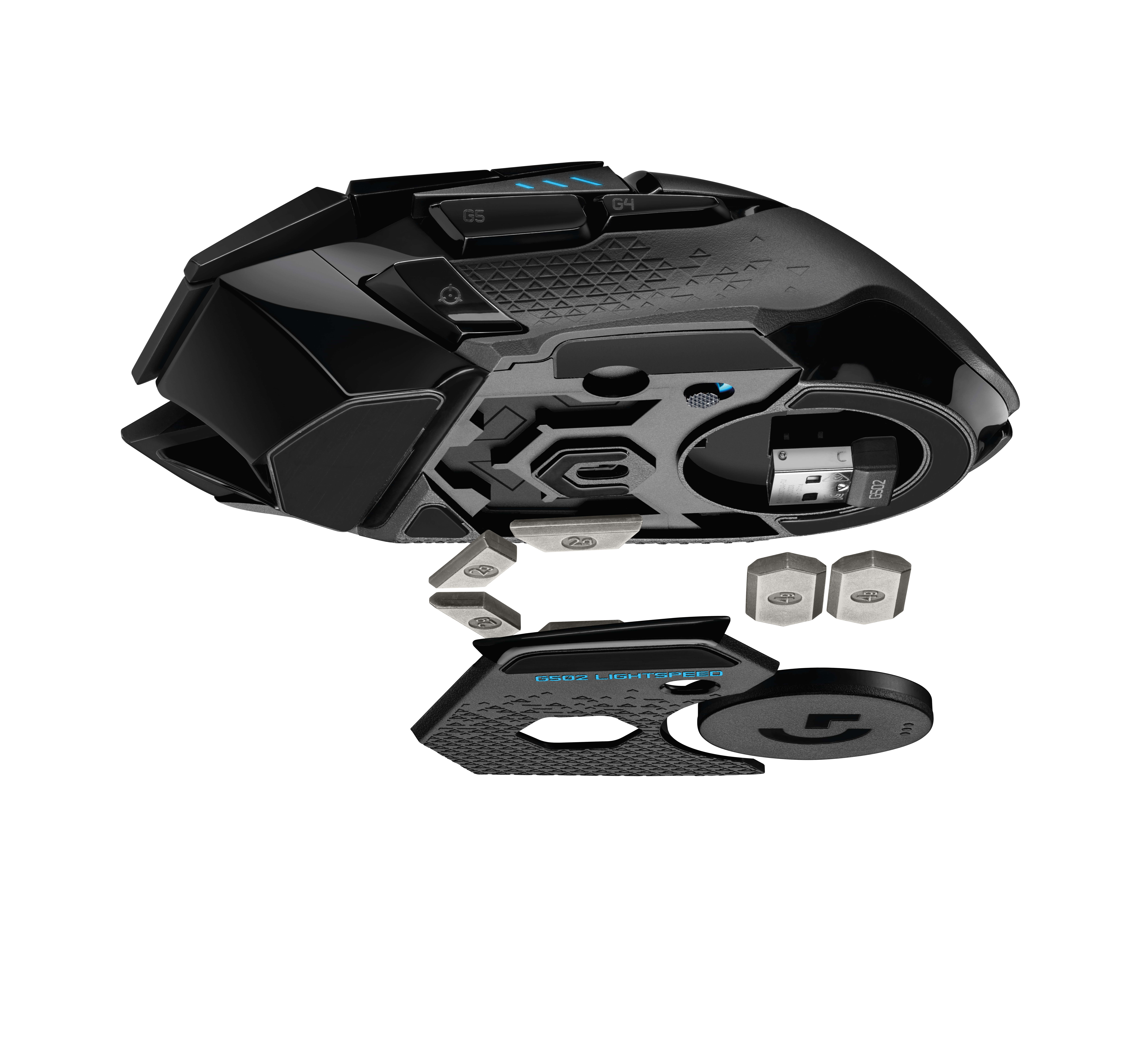 The classic G502 boasts the title of one of the best-selling gaming mice of all time. With the G Pro Wireless gaining massive popularity among professional and casual players, many Logitech fans have been wondering when the G502 would become wireless. The wait is finally over, though, with the May release of the G502 Lightspeed.

Logitech introduced the classic G502 to the market in 2014. The mouse has mostly remained the same in its physical presence, but it has seen consistent technological tweaks as Logitech has made massive strides to innovate. From the introduction of the thin wall design to the flexible HERO 16K sensor, Logitech has been consistently building toward the G502 Lightspeed since 2015.

The topic on everyone’s mind these days seems to be weight and the G502 has been the focus of many “brick” jokes in the past—especially with the current trend of making mice as light as possible. Logitech fans will be happy to know that the G502 Lightspeed shaves seven grams off of the total 121-gram weight of the G502 HERO. While that number seems underwhelming, it actually makes a massive difference when gaming.

Reducing the weight of the G502 was no small undertaking. Logitech had to completely redesign the mouse internals to make everything fit. The inclusion of the HERO 16K sensor and the Lightspeed wireless technology called for the company’s thin wall design, but also required the internals to be juggled in a creative way. Thanks to the thin wall endoskeleton design, Logitech cut weight where it wouldn’t be missed and configured the internals in a way that no other company has done in the past. Even the scroll wheel takes on a hollow design to cut down on weight.

Even though the mouse weighs in at about 114 grams, it feels nowhere near as heavy as a wired G502. The elimination of cable drag allows for more enjoyable gaming experiences and is a huge part of why the mouse doesn’t feel as tedious to lift off the mousepad or swipe across to get the flick on an opponent. Users looking to dial in a more specific weight can add the additional tuning weights included in with the G502 Lightspeed.

Speaking of getting crispy flicks, the HERO 16K sensor just feels right. The mouse is responsive and keeps up in a reliable fashion. When testing, we only experienced one issue lifting the mouse off the pad, resulting in the camera spinning around like a mad man. We chalked this up to a fluke since we had been using the mouse for hours of Rainbow Six Siege without another occurrence. During the aforementioned hiccup, we still managed to get a 4K in a one-vs-five situation, so it didn’t hinder our performance in any meaningful way.

The unique shape of the G502 Lightspeed is another high point, but if it hasn’t been for you in the past, then it isn’t for you now. Due to its shape, many gamers remain divided on the G502. We found no issues with the shape since we’ve used a G502 HERO in the past. While we enjoy the shape, it isn’t conducive to certain grips. Users may experience some discomfort using a palm or fingertip grip if they have larger hands. In the case of the G502 Lightspeed, grip style will be the make-or-break factor in deciding if the mouse is right for you.

Since there are 11 programmable buttons on the G502 Lightspeed, users will want to take advantage of all that utility. Users with a fingertip grip may find difficulty adjusting to tucking the mouse into their palm to reach the Dots Per Inch (DPI) clutch, a button that drops the DPI for better accuracy. When using a fingertip grip, we continuously snuck the mouse back into our palm to reach the clutch. Since we’ve used G502 mice in the past, the adjustment becomes second nature after a while, but may cause a bit of a rough transition for users unfamiliar with the shape and size of the G502 series.

When paired with the Logitech Powerplay pad, the G502 Lightspeed shines even brighter. The pairing feels great due to the Powerplay pad keeping the mouse charged in a way that promotes the battery’s long-term health without the user ever wondering when their mouse will die. Users never have to worry about burning out the battery with overcharging.

Without the Powerplay pad, users can expect a battery life of about 48 hours with lighting active and 60 hours without lighting before needing to charge the mouse via the included cable.

Logitech builds value into the Powerplay by providing two different surfaces—one hard pad and one soft pad. We opted for the hard pad and didn’t regret it one bit. The G502 Lightspeed has a great glide to it on a hard pad, and when we switched to the soft pad, its weight became more apparent by comparison. We did notice that the mouse feet did get chewed up a bit by the hard pad, but this could also depend on how hard the user presses down on the mouse when gaming.

Logitech’s G Hub software is also a huge part of the G502 Lightspeed’s ecosystem. G Hub is where users will be able to set commands and adjust RGB lighting on the mouse and any other Logitech gear you may have on your desk. We found the software to be pretty accessible and unintrusive when performing basic functions. Syncing the lighting on the Powerplay pad and the G502 was a one-button process and added a nice aesthetic balance to our setup when testing.

The 11 programmable buttons add value in the sense that users who edit or are just looking for more utility have a wealth of options when programming macros and basic commands. The G502 Lightspeed allows for onboard memory and profiles. You can change profiles on the fly and the profiles will be saved on the mouse if you need to take the mouse on the go.

For all the enthusiasts out there who love some satisfyingly “clicky” mouse buttons, they’ll be happy to know that the G502 Lightspeed retains the brilliant and bright clicks they’ve grown accustomed to with Logitech mice. The buttons feel responsive and are placed comfortably, aside from the DPI clutch with certain grips.