Both iterations of the G413 SE formula look suitable for home and office use. The design of each keyboard features the same standard-looking black and white colorway with little in the way of visual bells or whistles. While the aesthetics are no more exciting than a standard Dell keyboard from 2001, Logitech G packs in some gamer-friendly features to make the G413 SE keyboards worth the small investment. 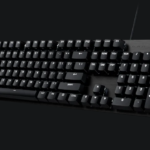 Being a Logitech G product, there are certain features that are expected from the brand and it delivers on the core needs. Looking at the body, Logitech G uses an aluminum top plate like many other manufacturers, including the top offerings from Corsair and Razer. Instead of the usual multicolor RGB lighting, the G413 SE keyboards ship with plain white backlighting, which is more subtle than the original G413’s red backlighting. Tagging along are PBT keycaps for improved durability and texture, but it’s not specified whether these are double-shot PBT like other brands.

One of the most important aspects of a gaming keyboard is the switches. Logitech G loads the G413 SE keyboards with tactile switches. Logitech G doesn’t specify whether these are its own proprietary switches. The included switches feature an operating force of 50 grams, an activation point of 1.9 millimeters, and a total travel distance of four millimeters. The activation point is just 0.1 millimeters away from matching Logitech G’s GX Brown switches. These switches also have a total travel distance that is 0.3 millimeters greater than that of the GX Brown switches found on the Pro X keyboard.

All-in-all, for the asking price, the G413 SE keyboards aren’t looking like a bad option for those in need of a more discrete gaming keyboard for whatever reason. The G413 SE will run $79.99, just under its red-lit predecessor, but it does sacrifice the USB passthrough. Looking at the tenkeyless model, the G413 SE TKL will cost $69.99 at launch.

Both Logitech G’s G413 SE and the G413 SE TKL are set to release in February.