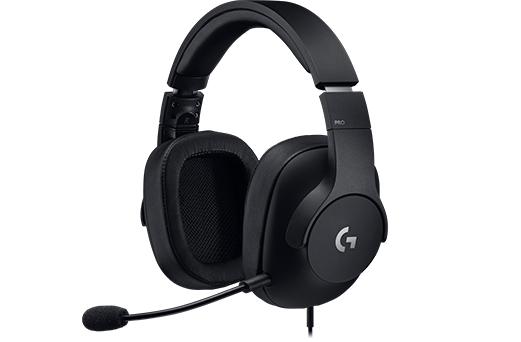 Logitech G’s Pro Gaming Headset is targeted towards esports enthusiasts. It takes the sleek design from Logitech’s G433 gaming headset and refines the peripheral for professional gamers and their fans.

The design is simple, and that extends to the Pro’s form and functionality. The $90 headset features similarly shaped ear cups as the G433, but upgrades the covering to leatherette casing. Logitech also includes a micro-suede option for those who want options. The adjustable headband is light, adding some customizability regarding size without bulking it out. Both these features together make the Pro relatively comfortable to wear. People who wear glasses will be happy to hear that the Pro passes the comfort test. The cushy padding around the ear cup form around the arms of glasses instead of pressing them into the head.

The Pro was still comfortable after a few hours of wear. I had no complaints on its microphone, either. The headset comes with a “pro-grade” mic with an attached boom, as well as a PC cable and a splitter for PC ports. Sound always came through clear regardless of whether it was over game chat, Discord, or Skype. The mic picked up environmental noise at times, but only it noise was relatively loud. The mic is detachable from the headset, and easily bendable for customizable positioning. The foam filter does a decent job of keeping sound clear, though some popping came through when the mic was placed too close to the mouth.

The attachable cable has a few simple controls, one for scrollable sound and another to mute the mic. The cable itself is braided, and plenty durable with a good length.

The Logitech G Pro Gaming Headset doesn’t feature 7.1 surround sound like the G433 before it, which is disappointing. Logitech boasts “surround sound audio,” but that’s using Windows 10 surround sound features like Windows Sonic and Dolby Atmos. But the lack of surround sound doesn’t mean the Pro doesn’t sound good; it does. Directional audio could be improved, but it was suitable for gaming—which is something serious players will be thankful for. Awareness in esports is one of the more important aspects of the activity. Audio cues and enemy footsteps often provide information that’s crucial to being successful in-game.

Sound isolation is good, but it’s not a noise-cancelling headset by any means. Cranking the volume up one on the headset will annoy your fellow passengers on the train and any of your deskmates. We found that sound leaks from the cups and is fairly audible even at a short distance.

Our biggest gripe with the Logitech G Pro Gaming Headset is the use of “Pro” in the name. For a headset that’s labelled with a professional tag, it’s got a surprising lack of customizability with regard to sound and recording. The price for the headset is good—we wouldn’t call it a “Pro” price, either—and that’s a plus. It’s not the greatest headset you’ll ever place on your dome, but the price point is appealing for what it’s got.

Pros: The price is great, and the sleek form is appealing to players who don’t want to scream “GAMER!” The Pro headset is also compatible with consoles.

Cons: The lack of 7.1 surround sound is disappointing in a Pro grade headset, and we’d like a bit more customizability out of something labeled as such.