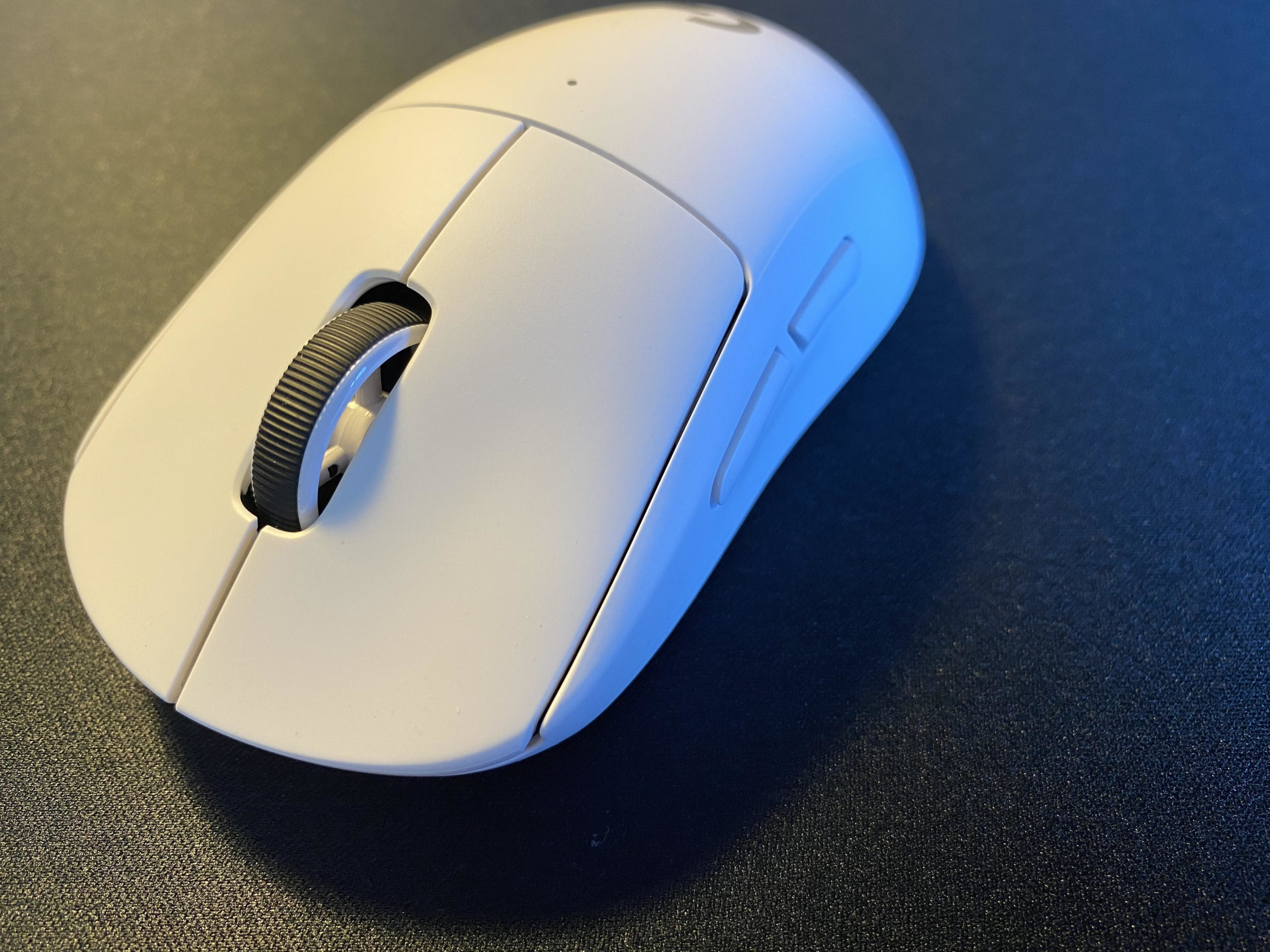 After nearly two years, Logitech has finally answered the calls from PC gaming and esports enthusiasts for a lightweight mouse—and the peripheral giant’s answer doesn’t disappoint. The Logitech G PRO X SUPERLIGHT provides gamers and esports athletes with a tightly designed mouse that has the feel of a professional’s tool that has some inherent ups and downs.

Lightweight mice take up a relatively large part of the mouse market spotlight—and for good reason. While the shape of a mouse is often argued as the most important feature of a mouse in terms of control and comfort, weight can also have an impact. With the general consensus being that lightweight gaming mice are here to stay, Logitech users have been left wondering when and if the company’s lightweight offering would see the light of day.

The Logitech G PRO X SUPERLIGHT has now entered the ring at a stunningly breezy sub-63 grams, a 17-gram drop from the standard G PRO Wireless. For reference, the newly released and much-loved Model O Wireless weighs in at 69 grams with its ubiquitous honeycomb shell design. While a difference of six grams may seem negligible, and most likely is in practice, the fact that Logitech achieved such a slim figure without the use of a honeycomb design is rather impressive. This cut in weight stands out even more when considering Razer’s Viper Ultimate hits 74 grams and hasn’t aged with much grace in terms of durability.

In terms of physical design, the SUPERLIGHT maintains the elegant and refined shape of its predecessor. The choice to stay with the original model’s design language may not seem like the most daunting decision to make, but it’s easier said than done when it comes to shaving off every possible gram. There’s a reason why the market has seen so many iterations of honeycomb-design gaming mice. Simply put, honeycomb shells are an easy way to cut weight and save the extra grams for the internals. This isn’t to say that the perforated shell is “the easy way out,” but by choosing to keep the now-classic G PRO Wireless design, the Logitech team definitely took their time in balancing the internal and shell weight.

The shape here remains as comfortable as ever, despite having a somewhat slender figure for larger hands. Our reviewer’s hand measures 19.5cm/7.7 inches in length from the tip of the middle finger to the base of the palm and 10.4cm/4.1 inches wide from thumb knuckle to the edge of the palm. The use of a palm grip seemed to be the most comfortable, though other grips are just as viable considering the flexible design. The hump of the mouse feels perfectly placed and doesn’t feel uncomfortable in any specific grip. Users will have to suss this one out on their own, but this design remains one of the most comfortable palm grip mice our reviewer has tested.

We mentioned earlier that Razer’s 74-gram Viper Ultimate had some issues in terms of durability over time. This statement holds true, but there’s no guarantee that the SUPERLIGHT will hold up much better. What we can say at this point is that the SUPERLIGHT feels sturdier out of the box than the Viper Ultimate. To be completely fair, Logitech has taken nearly two years to throw its hat into the lightweight ring, whereas Razer jumped in right away with one of the first non-honeycomb, true-ambidextrous, lightweight wireless mice.

Returning to the SUPERLIGHT, there’s a sense of sturdiness that isn’t found in other lightweight wired or wireless mice. Logitech’s lack of compromise in the SUPERLIGHT’s design is a hugely impressive feat in peripheral engineering and manufacturing. We’re relatively confident that we’ll be just as impressed with the SUPERLIGHT’s build quality a year from now.

One glaringly obvious difference between the SUPERLIGHT and its older sibling is the lack of ambidextrous support. Based on the information we received, this is looked at as more of a choice rather than a compromise. This mouse is geared toward competitive players and esports athletes, the majority of which are right handed. In looking to cut some weight, the lefty support has been removed. While we can understand the purpose of cutting lefty support, it’s a bummer for the small percentage of serious players out there who will feel like the mouse doesn’t live up to the marketing’s allusion to zero compromises. We said at the top of this review that the SUPERLIGHT’s professional-tailored feel came with some inherent pitfalls and the lefty exclusion is definitely going to be one of those downsides for a select portion of the community.

Clicks on the mouse one and two buttons feel sharp and crisp. There’s no pre-travel to write about and the actuation point of each button seems to hit right where you need it to in-game. The rubber coating on the scroll wheel feels comfortable and fits well with the softer and less snappy click of the middle mouse button. The side buttons here have an interesting feel. On one hand, the side buttons feel delicate and fragile, likely due to the lighter material. And on the other, they don’t give at all when put under unreasonable pressure. Other lightweight offerings have trouble keeping their side buttons from sinking in when put under even a reasonable amount of pressure, but a user can squeeze the SUPERLIGHT with unreasonable force and experience little to no creak or give. This is an attribute that may change over time, much like the Viper Ultimate, but for now, the construction of the mouse buttons remains impressive.

The SUPERLIGHT sees the return of the HERO sensor, which remains a top-notch sensor. At this point in peripheral engineering and manufacturing, it takes a subpar sensor to truly feel a big difference in day-to-day performance. Logitech’s HERO sensor continues to feel capable, precise, and smooth like most gaming mice should at this point. The company still retains its claim to revolutionizing the wireless gaming mouse space with its LIGHTSPEED wireless technology and it’s promising to see zero compromises in terms of performance when it comes to the SUPERLIGHT’s internals.

Pairing the HERO sensor and LIGHTSPEED wireless tech with zero-additive PTFE mouse feet, a material that should be standard as far as our reviewer is concerned, makes the SUPERLIGHT glide across cloth and hard pads with ease. The feet here take a bit to break in out of the box, but after a few minutes of play, the user will feel right at home. Something that we particularly value about the SUPERLIGHT is the inclusion of the secondary aperture door. The aperture door is the removable disk-shaped panel that covers the small compartment on the bottom of the mouse that holds the USB dongle when not in use. Logitech had already bumped up the surface area of the mouse feet, another greatly appreciated feature, but the secondary aperture door that comes in the box increases that surface area by a whole lot. It’s great to see a little extra value here in the way of flexibility.

Going along with added value, Logitech also includes a set of grip tape in the box for users who enjoy that extra bit of control. Our reviewer didn’t miss them one way or another, but griptaping gaming mice has become a trend that users very much believe in—and we think it’s good that Logitech is catering to this part of the community.

Logitech’s newest innovation will be available in both black and white colorways and run consumers $149.99 on its December launch. We consider $149.99 to be a steep price point and we have some fairly minor gripes considering that number. It’s been beaten to death a thousand times over, but the lack of USB-C seems odd at this point considering some smaller companies have implemented USB-C in their lightweight wireless designs that are more competitively priced, like the Pwnage Ultra Custom. A dedicated DPI Cycle button would have also been appreciated here, but we can almost understand the lack of one given the sub-63-gram weight of the SUPERLIGHT. Users can program a DPI Cycle button on the mouse but the G HUB software doesn’t have the best reputation. The same can and has been said for most gaming peripheral software, though. There’s also the matter of the cut RGB lighting support, which wasn’t missed by our reviewer but may cut some value for users looking for a certain aesthetic. Something to help soften the blow is a price cut to the standard G PRO Wireless, which has true-ambidextrous support and is still fairly light.

The bottom line here is that the SUPERLIGHT isn’t for everyone, but for others, it may be their personal endgame mouse like the original G PRO Wireless has been for so many people. Logitech’s newest offering feels like a professional’s tool, and in our experience, it feels sort of like buying the esports equivalent of a pair of Jordans. The SUPERLIGHT keeps up with the pace in any gaming environment, competitive or otherwise, and achieves the feel of being an extension of the user’s hand. The lack of compromise in the shell structure goes a long way in making the SUPERLIGHT feel like a premium product and we believe that will earn some good faith with prospective buyers who are either looking to get a lightweight update from their current G PRO Wireless or who are looking for a premium entry into the world of wireless gaming mice.