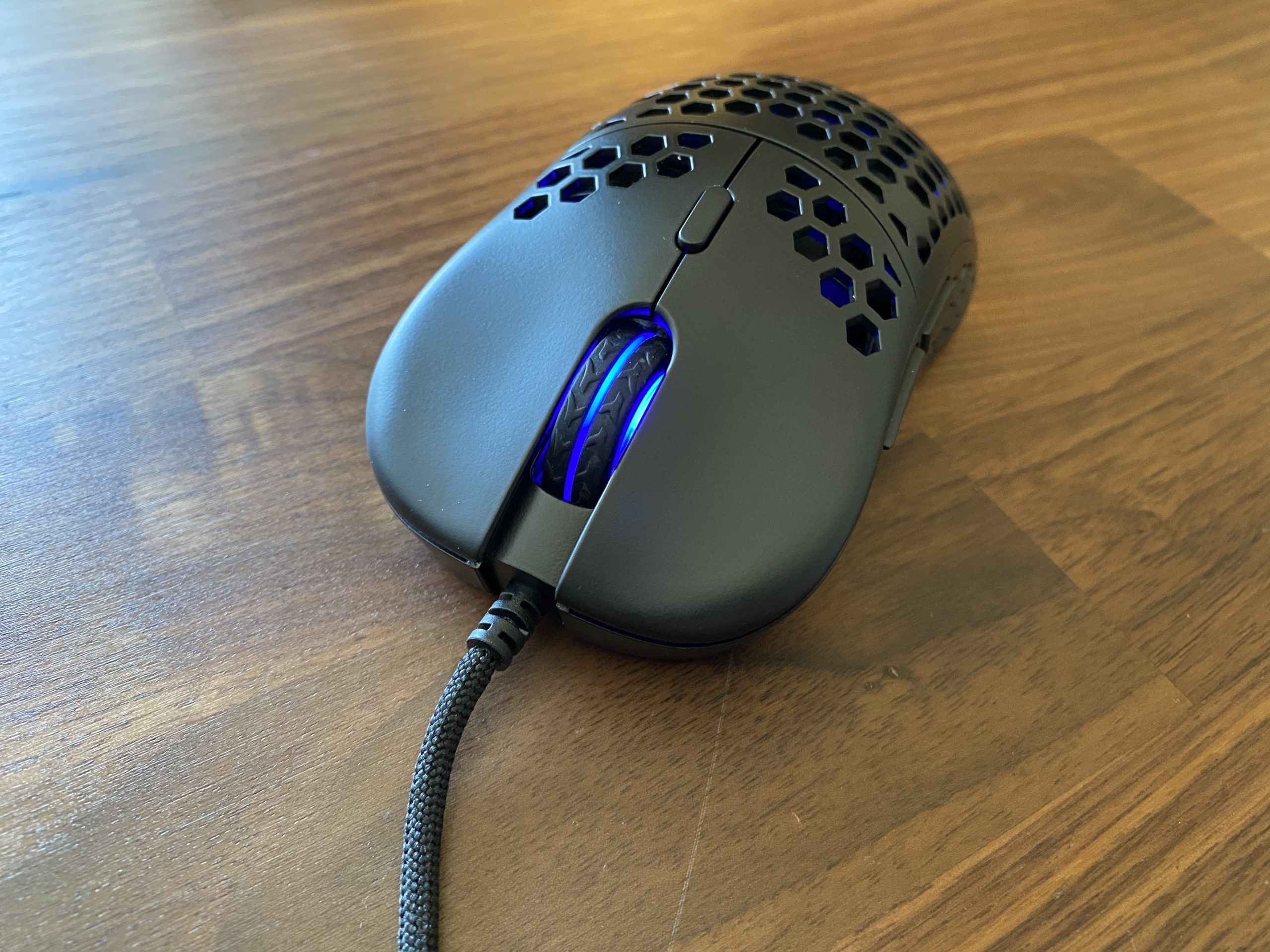 Monoprice formed in 2002, providing consumers with various electronics from HDMI cables to 3D printers and everything in between. Since then, Monoprice built several sub-brands like Monolith, Pure Outdoor, and Stitch.

The company is now bringing the Dark Matter sub-brand into the fold to provide high-end gaming peripherals for less. The Hyper-K Ultralight mouse stands as a pillar of the new sub-brand.

Dark Matter’s Hyper-K has a comfortable shape and standard performance but fails to arm the player with much confidence thanks to inconsistent mouse buttons and lesser build quality.

Like many lightweight mice, the Hyper-K sports the honeycomb design that is synonymous with lighter gaming mice. The design and internals don’t reinvent the wheel, but they still help scratch the lightweight itch.

Weighing in at 60 grams, the Hyper-K positions itself between the 69-gram Razer Viper and the 49-gram Cooler Master MM720. The Hyper K feels like the sweet spot—not too light and not too heavy. Glorious’ Model O provides a similar feel with its 67-gram weight and honeycomb design.

Dark Matter loaded this mouse with a Pixart PMW 3389 sensor. It isn’t the most decked-out sensor on the market, but it’s solid for the lower price point that undercuts Glorious’ Model O. This sensor nets you up to 16,000 DPI, a 1,000Hz polling rate, and a tracking speed of 400 IPS. Pixart’s 3389 sensor is also featured in Cooler Master’s MM710 and the Endgame Gear XM1 RGB, which hold their own in a competitive environment.

On the bottom of the mouse is a polling rate switch. If users are looking to change up their polling rate on the fly, the under-mounted switch will do the trick. Users can jump between 125Hz, 500Hz, and 1,000Hz. Typically, 1,000Hz is the industry standard, but if you’re running a much older CPU, dropping your polling rate might give your CPU some breathing room.

Under the buttons are the standard Omron micro switches found in many gaming mice. Omron switches are generally reliable but are often used to keep costs down. At this price, it’d be shocking to see any other switch inside the Hyper-K. The left click sounds decidedly damper than the right, which is much more high-pitched and pronounced.

It’s possible to acclimate to the button wobble, but it may take some time. Because the Hyper-K’s first impression doesn’t instill much confidence, players have a mental roadblock to work past. Mouse button wobble is hardly traumatizing, but users may find themselves constantly second-guessing themselves until they’re able to settle in with the wobble.

Side buttons have a sharp click to them but feel a little mushy. The rear side button sinks deep into the body when pressed anywhere other than dead center. There’s no discernible effect on performance, but it doesn’t exude quality. When paired with the lack of confidence caused by the mouse one and two buttons, the mushy side button doesn’t do the Hyper-K any favors.

Dark Matter may have missed the mark on the mouse buttons, but the Hyper-K’s shape is top-notch for users with medium to large-sized hands. While it doesn’t look like anything special, the symmetrical design of the Hyper-K feels versatile across several titles and grip styles.

Testing across claw, palm, and fingertip grips felt comfortable and didn’t hinder performance beyond getting used to gaming with different grips. Of the three grips, claw and fingertip were the most comfortable. The Hyper-K’s hump is less pronounced than the Model O’s, which makes using a palm grip feel less comfortable since there’s nothing to fill out the palm of your hand. Palm grip is still usable, but if it’s your go-to grip, you may find the level of control to be wanting.

For reference, our reviewer’s right hand measures 7.7 inches (195mm) in length and 4.1 inches (104mm) in width, categorizing their hand within the medium to large range.

There isn’t much to write home about regarding extra features, but the industry staples make an appearance. Dark Matter gave the Hyper-K a paracord cable, PTFE mouse feet, and customizable RGB lighting. While none of these features impress, they don’t do anything wrong and are welcome additions.

Customizing RGB with the included software is straightforward. This software is the same used to customize DPI settings and polling rate but handles RGB customization just as easily. There are several lighting presets per usual, and none are particularly groundbreaking. Users will find the typical effects, including breathing, streaming, and wave. This software is much more polished than the Dark Matter Collider TKL’s, which is off-putting considering each product’s perceived quality.

The paracord cable appears on nearly every lightweight mouse, so seeing it on the Hyper-K isn’t a surprise. What is surprising is the stiffness of the cable. Most cables loosen up after a short time, but it’s taking the cable two weeks to chill out. It may loosen more over time but remains stiff.

Including PTFE mouse feet is also a lightweight staple, but some brands do it better than others. The Hyper-K feels quick on its feet, but the feet are quite small and aren’t the thickest of the bunch. It would have been nice to see replacement feet, but it’s more of a “no harm, no foul” situation at this price point.

Overall, the biggest concern with the Hyper-K is its build quality. Between the wobbly buttons and the mushy side button, the mouse feels like a budget product. The Hyper-K isn’t quite the top-tier product Dark Matter set out to provide gamers. Two other issues call the build quality into question.

While the paracord cable is nice to see at such a low price, the connector boot that protects the cable’s connection to the mouse doesn’t feel secure. The connection feels loose when lightly wiggled back and forth. It may not be a concern right away, but you might want to use a mouse bungee if you snag your cable frequently.

The other concern may have more of a direct effect on gameplay later down the line. Users can easily press the DPI button by squeezing the bottom and top of the mouse. Your finger never has to touch the DPI button for this to happen. Luckily, this issue never occurred in-game, but it does raise concerns over whether it will happen in the future.

Dark Matter’s Hyper-K reaches high but falls a little flat in execution. While the company is out to provide “value to all gamers,” it doesn’t feel like there’s much value here. Granted, the mouse runs just under $40, but the build concerns keep it from being the top-tier performer Dark Matter wants it to be. Wobbly buttons, a loose connector boot, and a weaker shell don’t inspire much confidence.

If you’re in the market to try a lightweight mouse or on a slim budget, the Hyper-K is a decent option to get you started with a modest investment. Buyers net a comfortable 60-gram mouse with a solid sensor, paracord, and PTFE mouse feet for far less than what many competitors have to offer. The trade-off here is build quality, though, so it isn’t the best choice for those who plan to get long-term mileage out of the Hyper-K.