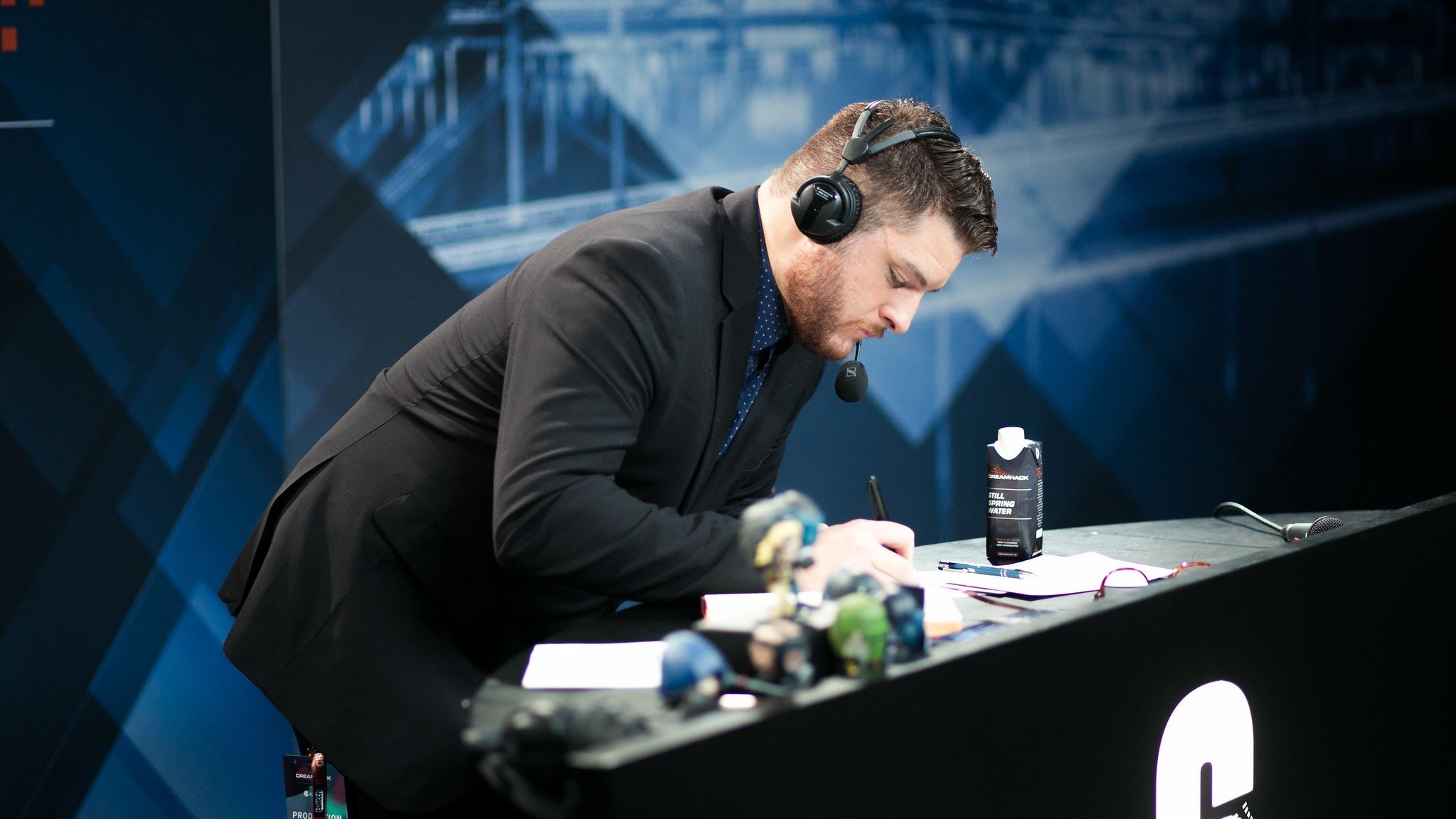 Parker “Interro” Mackay is a North American Rainbow Six Siege streamer, Pro League commentator, and host of the podcast Six on Six where he and Pro League player Troy “Canadian” Jaroslawski discuss all things Siege from map reworks to social media toxicity within the scene.

Spending a good deal of time at the casting desk and on stream, Interro’s setup features top-end audio products from the likes of Shure as well as Pro League and streamer favorites from Logitech.

While many streamers run traditional gaming headsets, Interro uses high-end headphones for streaming and podcasting. The Beyerdynamic DT 770 PROs are closed-back headphones that feature a comfortable seal thanks to the velour earpads. Velour earpads can also provide a more comfortable fit for glasses wearers.

Another convenient feature is the longer three-meter cable, which translates to 9.8 feet. This can either be a pro or a con, but if you’re using these headphones for streaming, the longer cable provides a bit more freedom of movement. Probably best not to take these for a jog, though.

The Beyerdynamic DT 770 PRO comes in three different impedances: 32 ohms, 80 ohms, and 250 ohms. Knowing which one your audio interface can drive is key in deciding.

The Logitech G Pro Wireless is an esports classic. Being used in League of Legends, CS:GO, and Rainbow Six Siege, the Pro Wireless is on of the most popular gaming mice in and out of esports thanks to a few things. At the top of the list is its accessible shape that is not only symmetrical but lefty-friendly.

Beyond shape, the HERO 25K sensor loaded into newer Pro Wireless mice can keep up with any mouse on the market. While nobody needs 25,600 maximum DPI, it’s nice to know what your mouse is capable of. The under-mounted DPI button is also a convenient feature that its lightweight sibling, the Pro X Superlight, removed along with the lefty support. These omissions make the original Pro Wireless a top choice for many gamers.

Logitech G’s G915 is a unique keyboard in that it provides a low-profile design without sacrificing the tactility of a standard mechanical keyboard. Featuring a choice between Logitech GL Linear, GL Clicky, or GL Tactile, users have the same level of choice they would with a regular mechanical gaming keyboard.

Along with the low-profile design, the G915 provides a comfortable typing angle with flip-up feet for fine-tuned comfort. Being low-profile, the G915 inherently goes slightly easier on your wrists, making longer gaming sessions less of an undertaking.

On top of the comfortable design, the G915 adds convenience with its Lightspeed wireless technology to ensure a stable connection. It also features Bluetooth support for office work or general browsing. Both Lightspeed and Bluetooth are compatible with Mac, PC, and more.

Often touted as the microphone that brought Michael Jackson’s Thriller to life, the Shure SM7B has a tried and true pedigree. A fan favorite of high-profile streamers like Nadeshot, Asmongold, more, the SM7B provides close-range performance and studio-quality audio.

Asus’ VG248QE is a solid option for competitive gaming. With a refresh rate of 144Hz, this FHD monitor can keep pace with competitive titles like CS:GO, Rainbow Six Siege, and other demanding titles. While 144Hz isn’t the top dog in terms of refresh rate anymore, most higher refresh rates are reserved for hyper-competitive circles. But if you’re looking to dip your toes into high refresh rate monitors, this is a good place to start.

At 24 inches, the display is large enough for sprawling narrative titles as well as just small enough for competitive titles where everything must be in view. When paired with its other characteristics, the Asus VG248QE makes for an ideal beginner monitor for those who are new to PC gaming.

Another streamer favorite, the Logitech Brio provides 4K image quality in a slim and unassuming package. There are no bells and whistles here, just a solid capture device that is trusted by many creators.

Features like Right Light 3 leverage HDR technology to give you the best picture possible. These modes can be beneficial for those who put their budget into their webcam and could use a bit of help correcting poor lighting.

To dial things in further, the Brio is capable of changing its field of view. Options include 90 degrees, 78degrees, or 65 degrees. For smaller spaces, this can help focus up your frame to omit certain areas you’d rather not make it on stream. The same applies to the opposite crowd as well.

It may not be a 30 series, but the previous generation’s RTX 2080 Ti still holds its own today. Although it trails behind the RTX 3080 Ti by about 30 percent in overall speed, the RTX 2080 Ti still packs enough muscle for 4K gaming.

On top of its 4K capability, the RTX 2080 Ti features Nvidia’s ray tracing technology and is one of two generations of GPU to utilize the company’s DLSS. DLSS is an image upscaling technology that leverages AI to render an image at a lower resolution before scaling it back up to a desired one. This is an easy way to get the most out of the RTX 2080 Ti.

Intel’s i7 8700K was released in 2017 but still provides solid performance today. While there have been many releases since 2017, the 8700K puts up solid numbers, trailing just behind its successor, the i7 9700K by six percent in effective speed. While it’s a bit older, this CPU easily handles games like Rainbow Six Siege.