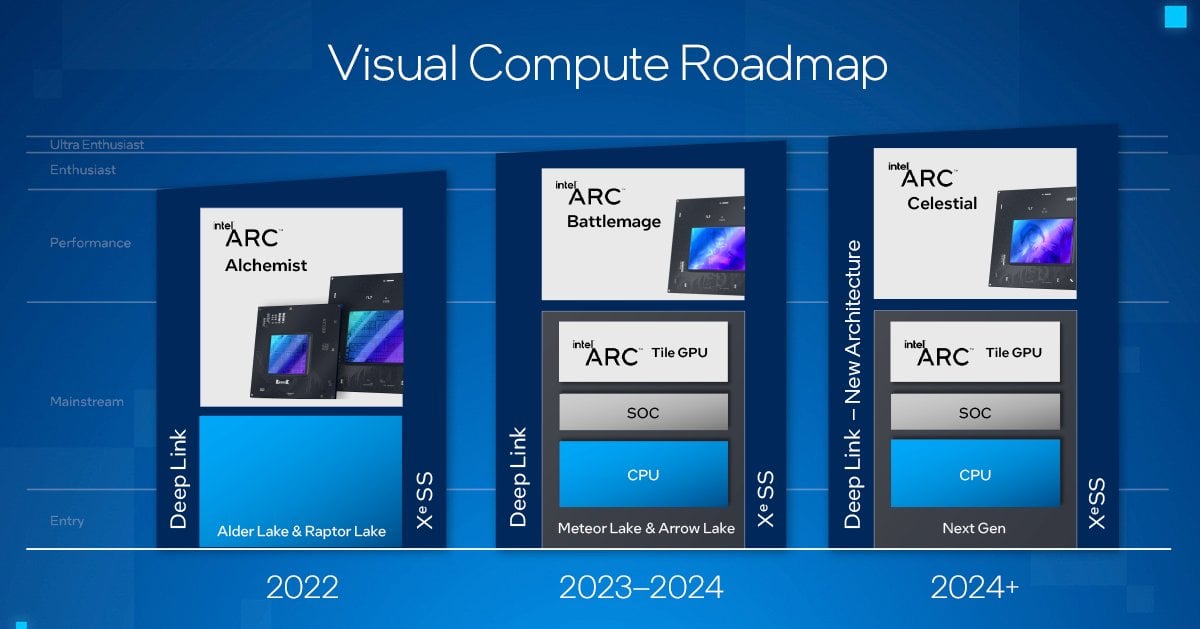 During Intel’s Investor Meeting 2022, the company shared new timelines for its long-awaited GPU and CPU solutions. The updated roadmaps follow several months of rumors that the Arc GPUs would not meet their Q1 2022 release windows.

Intel’s Arc Alchemist GPUs will now release throughout three different windows. Notebook versions of the Arc GPUs maintain their expected launch window of Q1 2022, which is halfway through at this point. Intel will follow up its notebook cards with the Q2 2022 release of its desktop GPUs, lining up with previous rumors of a desktop card delay. In Q3 2022, a professional graphics solutions will launch, with the Arctic Sound-M Data Center GPU possibly powering Intel’s cloud computing Project Endgame. Intel also revealed that Arc Battlemage and Celestial will release sometime in 2023 or 2024.

Moving to the CPU front, Intel’s new roadmap has Raptor Lake launching in the second half of 2022. Raptor Lake is set to have up to 24 cores and 32 threads on the Intel 7 process node. It will feature performance hybrid architecture and maintain compatibility with Alder Lake sockets. The new CPU will also feature advanced overclocking capabilities and net up to a double-digit performance hike over Alder Lake, according to Intel.

Looking to the horizon a bit, Intel’s Meteor Lake and Arrow Lake are set for launch sometime in 2023 and 2024, respectively. Not much is known about these CPUs, but Meteor Lake is based off of Intel4, while Arrow Lake is the first CPU that will use 20A tiles that are made using an external process. Intel touts these CPUs as having “discrete graphics-class performance.” Beyond these soon-to-be revolutionary CPUs, Intel only teased its Lunar Lake CPU as a “leadership product.”

Dialing it back a bit, Intel also outlined plans for its professional solutions, including Sapphire Rapids launching in 2022, Emerald Rapids in 2023, and finally, Granite Rapids in 2024.

Those who have carefully watched Intel’s Arc Alchemist GPU line finally have a concrete roadmap to base their excitement on. While Intel’s omission of anything desktop GPU-related at CES 2022 indicated that the Q1 2022 launch window would only include notebook options, the company wasn’t forthcoming with the desktop GPU window until now. The lack of information primed the rumor mill, which previously surmised that a Q2 2022 launch for desktop GPUs was in the cards.