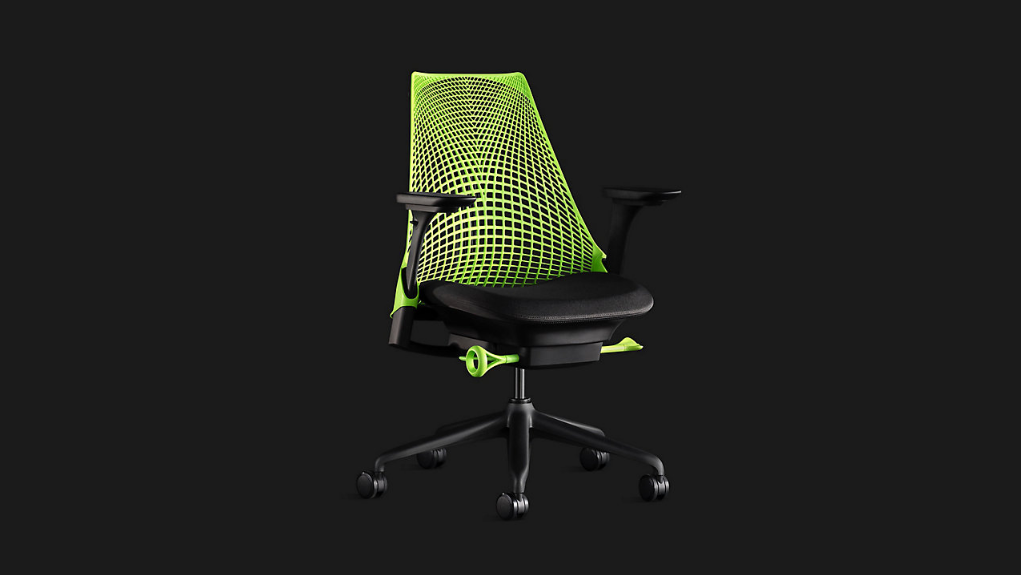 When Herman Miller entered the gaming chair market with its Logitech-themed Embody, many in the business scoffed at the price. And rightfully so, because $1,500 is a lot to spend on a chair and many can’t justify it.

I think that the Embody is worth every penny, but not everyone can be expected to foot that kind of bill. That’s where a gaming chair like the Sayl, Herman Miller’s latest foray into the gaming community, comes in.

Coming in at about half the price of an Embody, the Sayl Gaming Edition sports a truly unique design. Called “3D intelligent suspension,” the back is net-like mesh and made from “elastomer strands that are stretched to provide the greatest tension at points where support is needed.”

To put it bluntly, though, the back doesn’t provide the most relaxing way to sit. In fact, it just ends up feeling like a hard plastic that would be much better suited with some cushioning of some kind. Plus, there’s very little lumbar support, which is important for those who work or game in a chair for long sessions.

Despite its weird mesh design, it’s still a pretty comfortable chair to sit in. But I found myself longing for something a bit softer to lean back in after extended periods of sitting.

The seat is fully adjustable, allowing for changes to arm width and height, seat depth, seat height, forward tilt, and tilt tension. It fits in with the rest of Herman Miller’s roster in this regard, allowing for anyone to customize the sit to their liking, regardless of size.

One downside to this, however, is that the arms of the chair don’t fully lock into place. I found them sliding around to the right and left, and front and back every time I adjusted my seating depending on whether I was gaming or working. It’s a bit of an annoyance.

Like Herman Miller’s other chairs, it comes with a 12-year warranty and arrives fully assembled within a massive box. The box is actually pretty awesome—you just need to cut some tape and open a few flaps and the chair rolls right out, ready to go.

The chair comes in a bunch of funky colors, which is great for those looking to express themselves with something way less subtle than the Embody. It comes in red, white, neon green, black, and ocean blue.

The Sayl is an awesome chair, but it’s far from the best product that Herman Miller offers. It doesn’t perform like its Embody or Aeron models, but it’s still one of the best chairs I’ve gamed and worked in.

If you’re looking to take the plunge on a high-quality chair for gaming without going so far as to spend $1,500-plus on one of the company’s best options, then this could be the one for you.