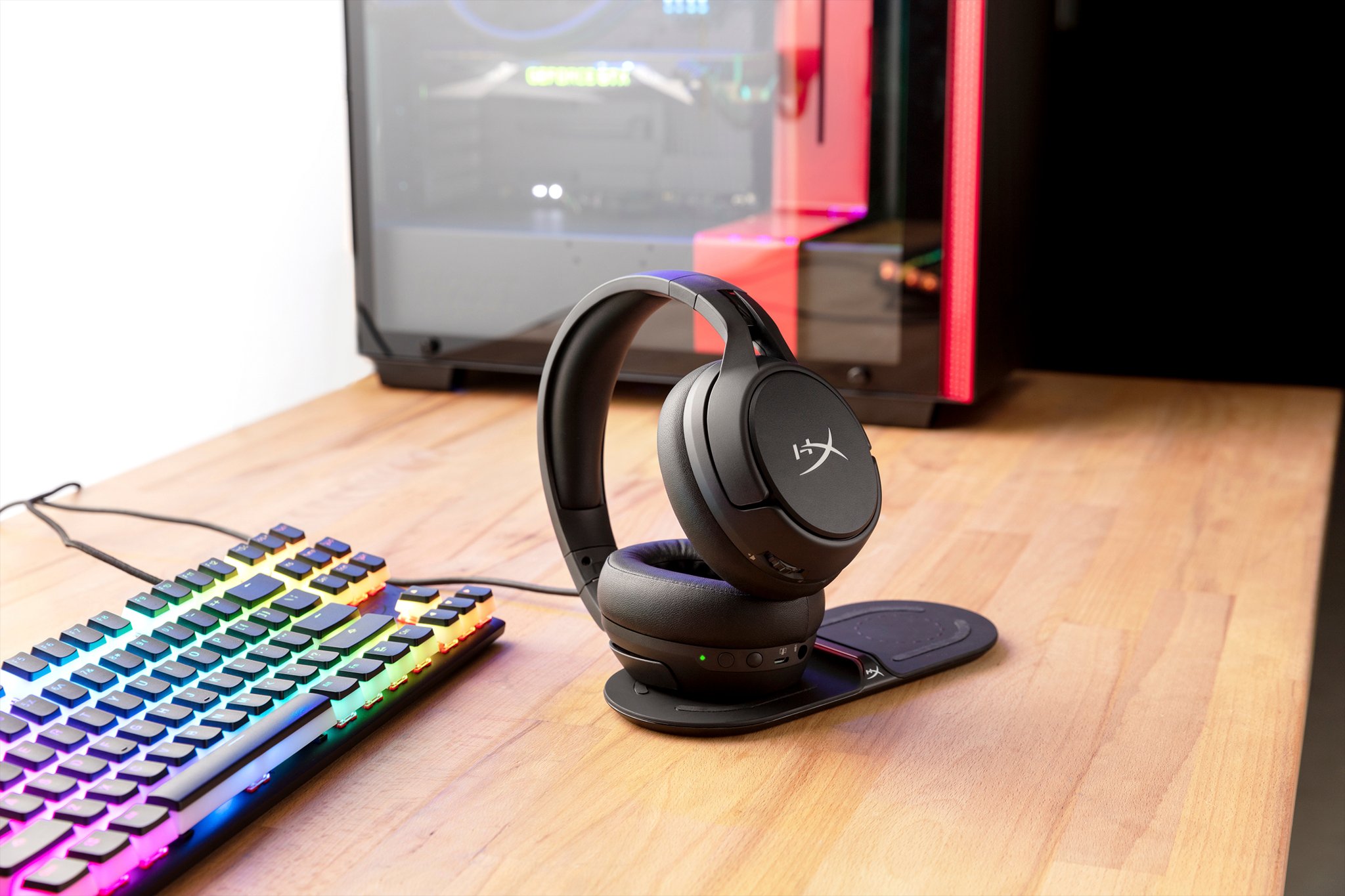 HyperX continues to push its way into every corner of the peripheral space. While not every offering is up to snuff, some products stand out as promising examples of what the company is capable of providing gamers. HyperX’s newest innovation, the Cloud Flight S Qi charging headset, is the first Qi charging headset, but while this innovation is impressive, it may not be for everyone.

From the outside, the Cloud Flight S headset looks like a pretty standard HyperX product. The design may not necessarily fit the classic “gamer” mold, but the HyperX logo plastered on the earcups gives it away. Aside from the logo, everything here is extremely minimal in design. The greyish-black frame doesn’t inspire any feelings either way and the side buttons are concave, which ensures nothing protrudes from the headset. There’s a volume scroll wheel tucked under the right ear cup, which is always a must-have on a wireless headset. The Cloud Flight S also boasts 90-degree rotating ear cups to add to its flexibility.

The ear cups are a nice leatherette material that feels broken in from the get-go and doesn’t require any extensive wear to feel comfortable. This is great for the ear cups but doesn’t really work as well with the headband, however. The leatherette and foam on the headband have way too much give and some users may begin to feel some fatigue after about an hour of use, if not sooner. If comfort is key to your performance, then you’ll want to try this headset on before buying.

Upon holding the Cloud Flight S in hand, the construction feels a bit on the fragile side. It’s not that it’s necessarily cheaply constructed, but the feel is there. The thinner-feeling plastic prevents the headset from feeling sturdy enough to withstand any sort of punishment. There’s a decent amount of flex in the headband but it feels like it could snap under the slightest bit of pressure. The upside is that the materials used here seem to help keep the weight down. If the headset were any heavier than the 320 grams it clocks in at, then the leatherette and foam on the headband really wouldn’t stand a chance. It’s an odd-feeling gaming headset in-hand, but it seems more like a matter of subjectivity.

Getting the Cloud Flight S headset up and running is extremely simple. It’s a matter of plug-and-play for the most part. There are a few things the user can do with the software that they can’t with the onboard controls, but we’ll get into that when we go over how the Ngenuity software handles the headset a bit later. The included dongle is pretty nonintrusive, and if the user doesn’t have room in the rear for the dongle, it doesn’t look overly “gamer-y” in the front USB ports. Users will likely not notice it after the first few days of use. It’s a weirdly small positive to note, but we appreciated it quite a bit.

The big draw here is HyperX loading the Cloud Flight S with Qi charging capability. While this seems a bit gimmicky at first, we personally love using HyperX’s Qi-compatible devices. This may add a premium, but it’s well-worth not having cables clutter up the desk or drawer.

Qi charging here is reliable as ever and adds to the cohesion of HyperX’s lineup. HyperX is clearly making a run at a unified Qi collection of products and this is a solid addition to that lineup. The only issue is that it positions itself in a niche category that comes with a price barrier to entry. To really get the most out of the $159.99 price tag, the user must already own a Qi charging pad. If so, then that’s great, but it’s something to consider when purchasing the Cloud Flight S. It’s a big win for HyperX that unintentionally alienates some prospective users. Users can also easily frame this as an investment in a unified set of all-wireless peripherals with the HyperX Pulsefire Dart in mind.

Users will also be able to use this headset for hours on end. We keep a fairly regular gaming schedule and the headset made it well past a week of regular and gaming use before needing a charge. It’s quite impressive how far one charge can take you after hours of gaming at higher volumes. HyperX clocks the battery at running at 50% volume for up to 30 hours, which adds a layer of confidence when picking up the headset for a nightly gaming session.

A highly coveted feature that users will notice is the addition of a detachable microphone. Having the option to detach the microphone is always a plus since it adds to the flexibility of the headset. This lends itself well to mobile gamers who find time to game on-the-go but don’t want to have a microphone while in public. Again, this is a feature that’s always appreciated and really should be included in most gaming headsets in 2020. It’s good to see companies recognize that gamers don’t want single-use gadgets cluttering their desks and are attempting to provide products that meet the needs of gamers. Whether it’s for listening to music or any other form of media, nobody wants a microphone in their face while they’re not gaming.

Potential buyers will be happy to know that the Cloud Flight S headset’s 50mm drivers are solid performers out of the box. While it doesn’t quite meet the beefy lows and crisp highs of other headsets, it’s still a worthy adversary on the battlefield. Some highs can feel a bit tinny at times, but the bass tends to maintain a rich tone across genres of both gaming and music. HyperX has pre-optimized the headset to switch profiles depending on which game you’re playing. The Rainbow Six Siege preset didn’t feel drastically different than what’s normally played at, but that’s a subjective take since most users will be coming from their own preferred settings. Footsteps were trackable and audio cues were well-pronounced. It would be nice to have a bit more control here, but the presets are solid enough and completely optional. 7.1 surround sound is also an option.

HyperX’s Ngenuity software plays a bit nicer with the Cloud Flight S, but it still takes an unreasonable amount of time to save a profile. Mapping the buttons on the side of the left ear cup was simple enough to do and there are a host of options to choose between. The unfortunate part is the software still saves extremely slowly. Some things just don’t make it into the profile and it’s a bit annoying to have to go back and re-do it.

Having the option to program the side buttons is still ideal, however, and while we didn’t find ourselves using them as much as we thought we would, this is a feature we could see many users loving. It adds a ton of flexibility and allows the user to tailor the headset to their specific wants and needs in terms of controls.

If users are looking to invest in a unified all-wireless Qi-compatible peripheral lineup, then the Cloud Flight S is the obvious choice since it’s pioneering this niche corner. If you’re someone who doesn’t really see the value in Qi charging, then this clearly won’t be right for you. The word investment is also key here, since the user must already own a Qi charger for this purchase to make sense.

The bottom line here is that the Cloud Flight S is a solid performer with some added flexibility catered to a specific audience.